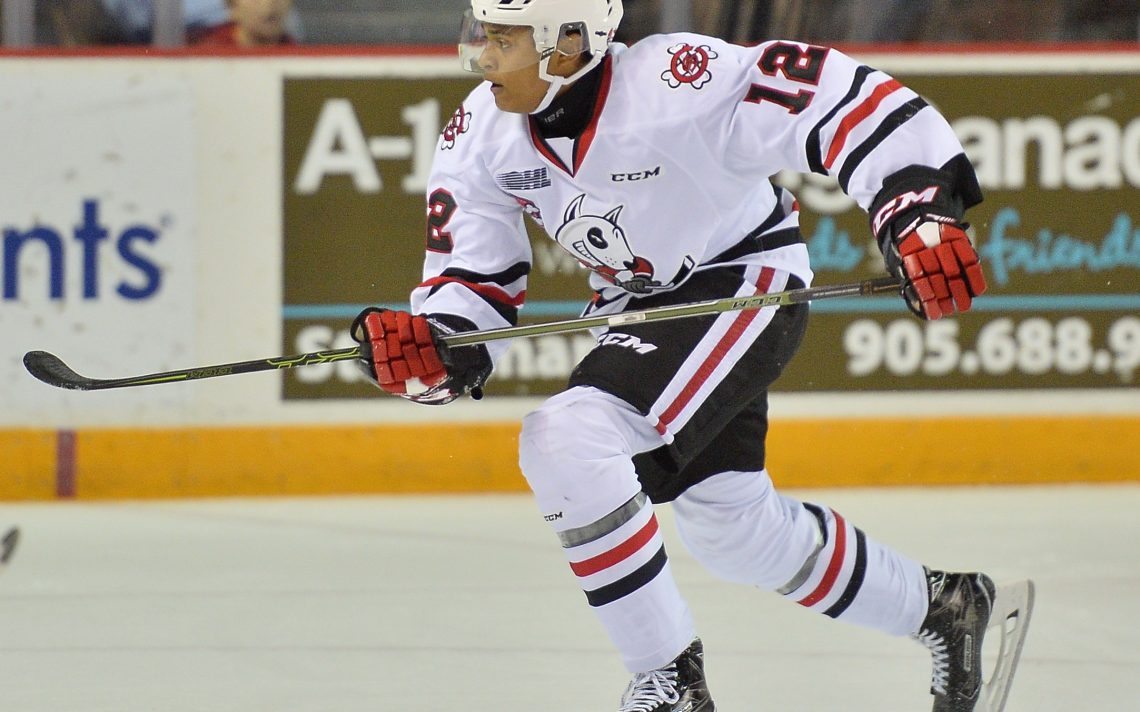 Akil Thomas is looking to build on a solid rookie season.

What a difference a year can make.

Akil Thomas entered training camp last season as a highly touted first-round draft pick who despite enormous promise had yet to play a game in the Ontario Hockey League and was still an unknown commodity.

Jump ahead one year and the skilled forward admits that walking into training camp with the Niagara IceDogs this season was a much different experience.

“It’s night and day coming in last year and coming in now. I know the coaching staff really well and I’m happy to be here.”

Thomas may have been an unknown commodity — most rookies are — but he quickly established himself as a legitimate talent worthy of his first-round selection.

The former Toronto Marlboros star netted 21 goals and 48 points in 61 games. He received plenty of ice time in crucial situations, with significant roles on both specialty teams.

It was an eye-popping performance overall, considering many rookies are often relegated to fourth-line, mop-up duty.

“We’ve never had a rookie put up numbers like he did and have such a successful rookie season,” IceDogs general manager Joey Burke said.

“On the one hand, (former IceDogs star) Ryan Strome goes from 15 (points) to 106. To make a jump like that for Akil will be difficult, because he was that impressive as a rookie.”

Burke makes no bones about how important Thomas is to the IceDogs this season.

“Not to put pressure on him, but I could see 30, 40 goals out of him this year,” he said. “He’s coming in as a top 10 NHL prospect and I imagine he’ll just keep climbing that.

“He’s a guy who literally answers every challenge assigned to him. He comes in as a rookie last year and plays in our top six and is one of our top forwards all season long.

“We expect some growth, but with some of the guys you see progress from Year 1 to Year 2. He was already there in Year 1.”

Thomas, too, has high expectations.

“I’m expecting to be way more of a leader this year,” he said. “We still have a young group, so I’m looking to be a leader on and off the ice and looking to be one of the guys the coaches can depend on in important times of the game. I’ll have to show them that early in the season.”

In other words, there is no thought of a sophomore slump.

“The sky is the limit,” Burke said. “To make the Ryan Strome-esque jump from Year 1 to 2, I think, will be tough but we’ll continue to see his dynamic play and he will continue to improve for sure.

“A lot of what we do is going to run through him, especially up front. I wouldn’t be surprised to see him moved into the middle to get him even more involved.

“He’s one of, if not our biggest piece, and we expect him to be extremely dynamic this year.”

Thomas had a busy summer preparing for his second go around in the OHL.

He joined a new gym and began working out with more OHL and pro players.

“I got familiar with them and asked them questions about their journeys to making it to pro,” Thomas said. “Obviously, there are some ups and downs. I trained with experienced OHL players and I learned a lot.

“I feel really excited for this year.”

Thomas also suited up for Canada’s national under-18 team that finished a disappointing fifth at the Ivan Hlinka Memorial Cup. Thomas was scoreless in five games.

“Even getting to play with the top picks in Canada and learn off of guys from the (Western Hockey League) and the Q (Quebec Major Junior League), it was awesome,” he said. “It was a really good experience. I’ve never played with players that good before, so it was a little bit different.

“All eyes are on you in the tournament. There were tons of NHL scouts. It was officially the first step to the draft.”

Speaking of the draft, Thomas has been ranked 18th overall among North American skaters by HockeyProspect.com and 21st by Future Considerations for the 2018 NHL Entry Draft.

“If you make sure you do well with the IceDogs, everything else will take care of itself,” he said. “You can’t control what goes on with other players and what scouts think of you. You just have to do your own thing. The draft will happen, no matter what.

“You just do your best and do the best for your team.”