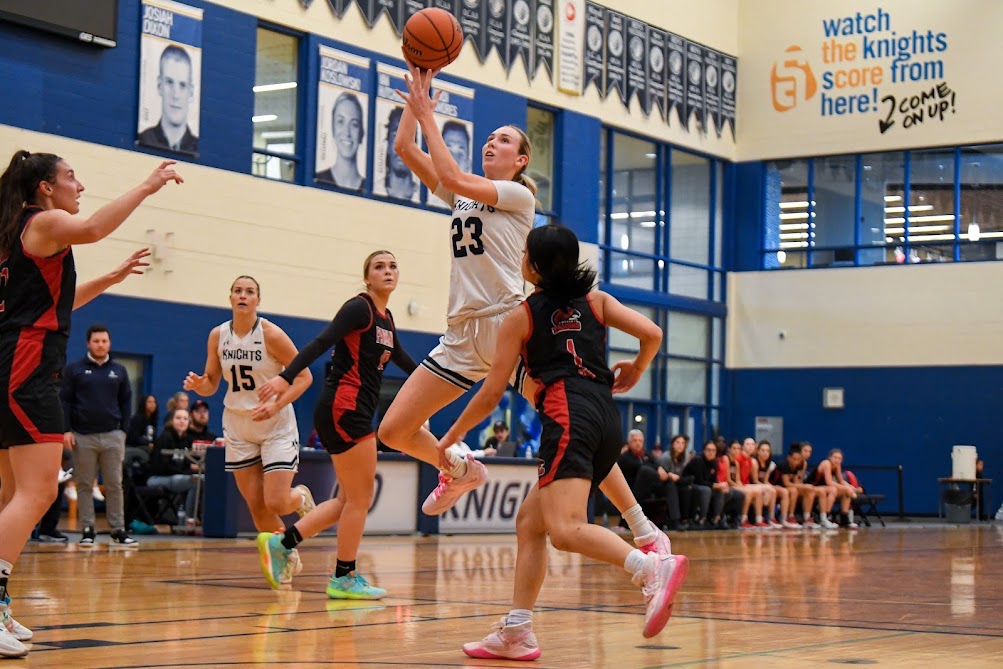 Molly Taylor has taken her game to the next level this season with the Niagara College Knights women’s basketball team.

“Molly has done a great job of developing and putting in the work to improve in lots of areas of the game,” Niagara head coach Chris Rao said. “She has really improved on defence and has been paying attention to our schemes and what we needed.”

Through nine games of the Ontario Colleges Athletic Association regular season, the 20-year-old Niagara Falls native is averaging 29.1 minutes, 8.8 points and 7.8 rebounds per game. She has almost tripled her playing time from her rookie season and in the process has more that doubled her scoring totals and increased her rebounding by more than a third. The A.N. Myer graduate is tied for the team lead in rebounding.

Rao saw this coming at the end of last season.

“She was a big part of our playoff push last year, she has owned her role and the production matches the work she has put in,” he said.

Playing solid defence has been a key to it all.

“Molly allows us to do a lot of cool things defensively scheme-wise and she plays a big part of what we are doing. She is able to guard multiple positions, she is solid, she talks a lot and it has been a real catalyst for us.”

Taylor has helped the Knights become one of the best defensive teams in the country.

The former Niagara Juel and Juel Prep player points to one major thing for her success this year.

“The biggest thing for me is confidence,” the six-foot guard/forward said. “When I came into college, I was very unsure as a player and wasn’t sure what my role was on the team or what my assets were. Coach Rao really helped show me what is important in the game, what I am good at and what I need to work on. That made a big difference for me.”

Two of her biggest strengths this season are leadership and ball-handling.

“It’s holding the rookies and everyone on the team accountable. I have also gotten a lot better at having the ball in my hands, making the right decisions when I drive to the basket and bringing the ball up if we need it.”

She knows there is still work to do.

“I have to work on my nerves, just calming down in stress situations and taking a breath.”

She agrees with Rao that her defence has improved.

“I’m really happy with my defence this year and I think it is because I have been given opportunities to guard the other teams’ good players and told how important my role is to guard players a certain way. That made me want to play up to those expectations.”

Taylor knew she was going to have a much better year during the off-season.

“I missed basketball so much that when we started playing  again, I wanted the ball in my hands, I wanted to score and I wanted to be a part of everything,” she said. “My confidence built from scoring and making good plays in practice.”

Like all her teammates, Taylor had to deal with losing her first OCAA season to the COVID-19 pandemic.

“It was definitely hard because it was such a big year for us, our final year of Juel and going into college. You don’t know what school you want to play at and you wonder if you still want to play basketball,” she said. “What got me through it was talking to my basketball teammates that I have been with my whole life. They were all on the same page and we were all excited to get back in the gym. Being with them motivated me to keep playing.”

“I really enjoy it and it is really hard to balance but it is a lot of fun.”

She will graduate from the program at the end of December and she plans to remain at Niagara College to complete her eligibility.

“There was talk of an RN program coming to the college where I could do another two years. I would either do that or go into something like paramedics or social work.”

Niagara has a 5-4 record heading into a Wednesday home game against Redeemer at 8 p.m.

“We are trending the right way. It is hard because the record obviously means everything but if you look at the numbers closely, we are performing very well,” Rao said. “It will be a matter if we are able to execute down the stretch.”

The Knights will host the OCAA championships March 3-5 and they get a host berth in the event. They are well on their way to earning their spot and the key will be to finish strong and get a higher seed going into the provincial championships.

“The seeding is the big thing,” he said. “To give ourselves the best possible route to the final we need to do the best we possibly can down the stretch.”