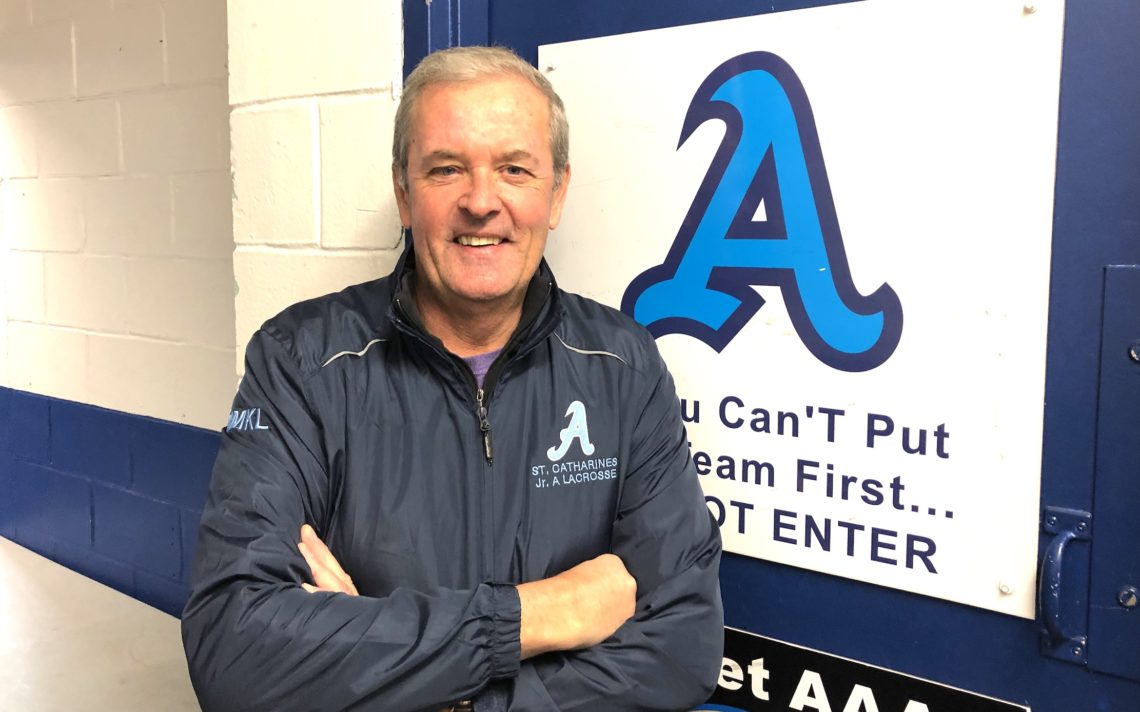 It has taken a decade, but Paul Coates is finally getting his due.

The president of the St. Catharines junior A Athletics has been named this year’s winner of the Jack Wilson Memorial Award.

Coates, a 60-year-old Rexdale native who moved to St. Catharines in 1988, was humbled by the award.

“I’ve certainly had a lot of people reach out me and congratulate me,” he said. “I’m appreciative of being recognized in that way but I’m just one person on a phenomenal team that makes all this happen.

“I have an awesome board (of directors). Other people have five or six, we have 12 or 14 people that all do a tremendous amount and then a great general manager and assistant and a great coaching staff.”

Coates was also quick to thank his family — sons Dan, Spencer, daughter Kristen and wife Anmarie — for their understanding and support.

Chcoski shared the letter that was sent to the Ontario Lacrosse Association nominating Coates.

“The St. Catharines Junior A Athletics would like to nominate team President Paul Coates for the Jack Wilson Memorial Award. Paul has served the organization for over a decade, continuing to volunteer his time well after his son, current Colorado Mammoth captain Dan Coates, graduated from junior lacrosse in 2008. Paul continues to donate his time with the Junior A’s, even as his younger son played in the local junior B system. He has spent countless hours donating his time to the game of lacrosse, whether it was driving hours to a league meeting or simply down the street helping out a bingo for our fundraising efforts. Paul is also one the first volunteers to the rink for home games making sure everything is running smoothly. Paul’s role in the organization is irreplaceable. Paul also has a gift of the gab, from MCing junior A events as well as Old Boys Lacrosse fundraisers, Paul has a way of making everyone in his periphery feel comfortable and included. The camaraderie he has with everyone in the organization, from the trainers to volunteers, coaches to players, Paul gives everyone his time. Between his time with the Junior A council, and acting as the president of our organization and all that includes, Paul is an absolutely irreplaceable human being in our league and organization. With no children still in the system, Paul donates his time simply for the love of the game and with hopes of continuing to help it grow. It is for these reasons that we nominate the very worthy Paul Coates for the Jack Wilson Memorial Award.”

Coates began his tenure after his son Dan had graduated. Spencer also played for the A’s.

“I had two boys go through the system and both the boys got treated incredibly well,” Coates said. “As Danny finished his tenure with the Athletics, they needed bodies and all of a sudden I got put forward to be president.”

Coates has seen a lot of ups and down in his tenure.

“They have been a tough 10 years,” he said. “I would say the last four years have been a lot better. Harry Erskine, Todd Zavitz and Lindsay Taylor got involved and they have done tremendous things. I can’t say enough about people like Joanne Vinc who have been with me the whole time.

“Finally, we see light at the end of the tunnel but it was a tremendous struggle there for a while. I think we’re finally moving in the right direction. I hope more people give back because that what this is all about.”

Coates, who will receive award at the Ontario Lacrosse Association annual general meeting the weekend of Nov. 8-9 in Niagara Falls, loves representing the double blue.

“If you go back, St. Catharines lacrosse has been around since the 1800s. It’s the oldest lacrosse association in the country. It’s huge and so many people recognize the double blue and where I drive and see the Athletic A, whether that represents either junior A or minor lacrosse, it’s tremendous.

“I take great pride in being the president of this organization. I know our minor system is doing great things and that we should have very competitive teams as we try and push toward having a Minto Cup.”

Coates confirmed the Athletics will be bidding on the 2020 Minto Cup.

“I feel we have a good opportunity working with the Canada Games committee. They have indicated we will have access to the Meridian Centre in order to be able to host it,” he said. “We will also have a very competitive team next year. There will be change but we have some great players coming back.”

Brampton, Mimico and Toronto Beaches are also expected to bid.

The A’s recently announced their award winners for the 2019 season.

Defensive players of the year: Latrell Harris and Alex Pace.