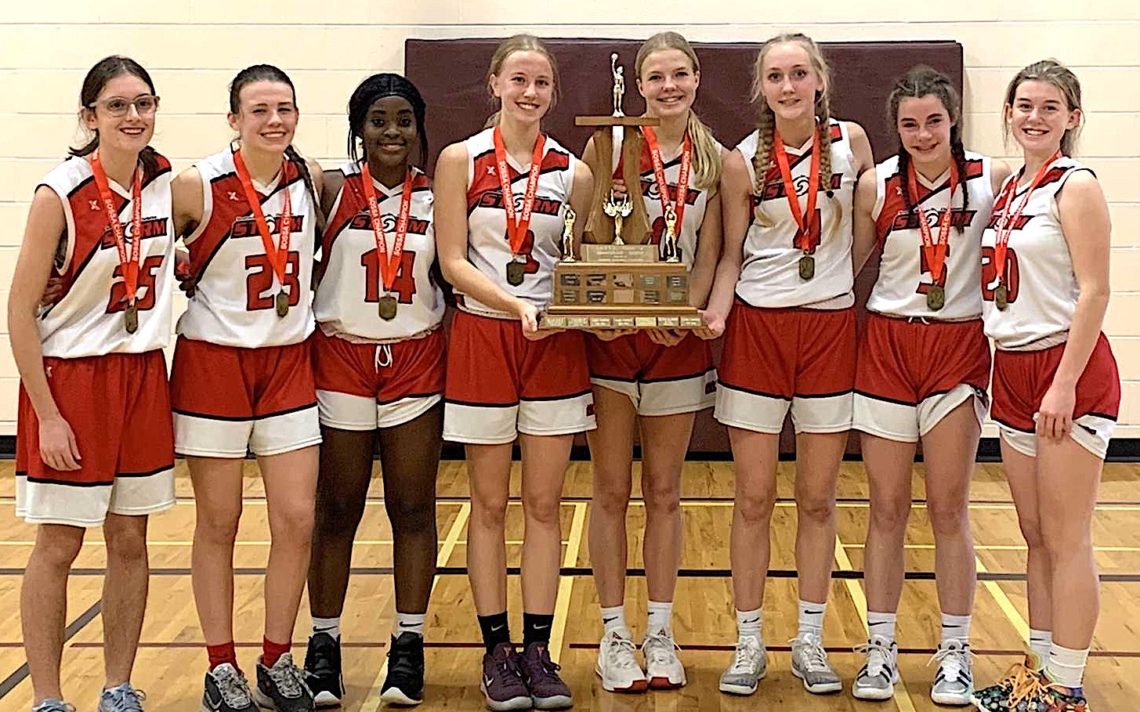 “We went into SOSSA knowing we were the host school for OFSAA (Ontario Federation of School Athletic Associations A championship) but we wanted to win so that we earned the right to go to OFSAA,” Storm forward Jacoba Hoekstra said. “We had a few tough losses in the regular season but that just built our skill level up for the hard competition we would face at SOSSA.”

The Storm finished in second place with a 4-2 record in the Niagara Region High School Athletic Association Zone 4 regular season before defeating Heritage Christian 48-26 in the Zone 4 final. In league play, the Storm lost by a considerable margin to SOSSA AAA champion Sir Winston Churchill and by one point to AAA Eden.

Playing Churchill was a big boost for the Storm.

“It was a good thing and all of us on the team could attest to that,” Hoekstra said. “It is not one person’s fault and we lose as a team and play as a team. It showed that we needed to work together, build each other up during those circumstances and work harder the next time.”

The realization the Storm had a team that could do some post-season damage came a week before SOSSA when the squad won a silver medal at the Ontario Christian Schools Athletic Association tournament.

“It didn’t occur to us until we played in the Christian schools tournament and we snagged a silver medal there,” Hoekstra said. “We saw our competition for SOSSA and we realized we could do it. We just needed to work real hard.”

DeKlerk agrees with that assessment.

“We played really well and we played a really strong first half against a tough opponent, King’s. We demonstrated that we had what it takes to go far,” he said.

That tournament confirmed what the coaching staff knew all along.

“We felt comfortable with the team right at the beginning of the season and we had high hopes given the quality of the skills that the girls had,” DeKlerk said. “We were excited that we were able to have a season and now we are excited to be at OFSAA.”

Hoekstra, who only plays high school basketball but does compete in travel volleyball with the Grimsby Vipers, feels the team has two key attributes.

“We have a really good bond to begin with and we work really hard.”

DeKlerk points to a number of other factors.

“We have a lot of depth and a lot of girls who come off the bench and help out a lot,” he said. “We have a really good transition team and our strongest point is our defence.”

The Storm also has good size with one six footer, two 5-foot-11 players and one 5-foot-10 athlete.

“We have a number of girls who have quite long arms and it makes for a good defence,” DeKlerk said.

It took awhile before the team hit its stride.

“It was tough and we really had to get in the rhythm of working really hard throughout the week and the first part of the season we were all very tired by the end of the week,” Hoekstra said. “Our cardio wasn’t up to date but we are very thankful we are playing.”

The 17-year-old St. Catharines resident is thrilled to be playing at OFSAA in her home gym.

“We would have loved to have that team bonding and travel but it is nice to have it here,” the Grade 12 student said.

Hoekstra is thankful that her school stepped up to host the provincial championship.

“We were really grateful to have a season to begin with and to have an OFSAA and make it there is a great opportunity because we have missed that last year and a half or so of sports.”

“We looked at it and said ‘We have quite a strong girls team and we didn’t want to take away the possibility for them to play in a provincial championship.’ We hosted an OFSAA championship back in 2009 for girls soccer so we decided to throw our name in the ring and here we are.”

There will be 10 teams at OFSAA and they have been divided into two pools of five. Each pool will play a round-robin with the top two teams from each pool advancing to the semifinals.

Games will be played at Smithville Christian and Grimsby Secondary School.

Semifinals will be held Saturday at 9 a.m. at Smithville Christian and Grimsby and both medals games will be played at Smithville. The bronze medal game will be at 2 p.m. and the gold medal game is scheduled for 3:30 p.m.

“Our hope is to play well, to show our love of basketball, of God and others through our play,” DeKlerk said. “We hope to win and have competitive matches that we can show our skills.”

He feels it is an advantage to play at home.

“It definitely helps in terms of travel time and the comforts of being at home as well. That helps but there is more pressure being the host school but we are ready for that pressure.”

All game will be livestreamed and there will be no students in the stands. The link can be found at https://www.ofsaa.on.ca/girls-basketball. 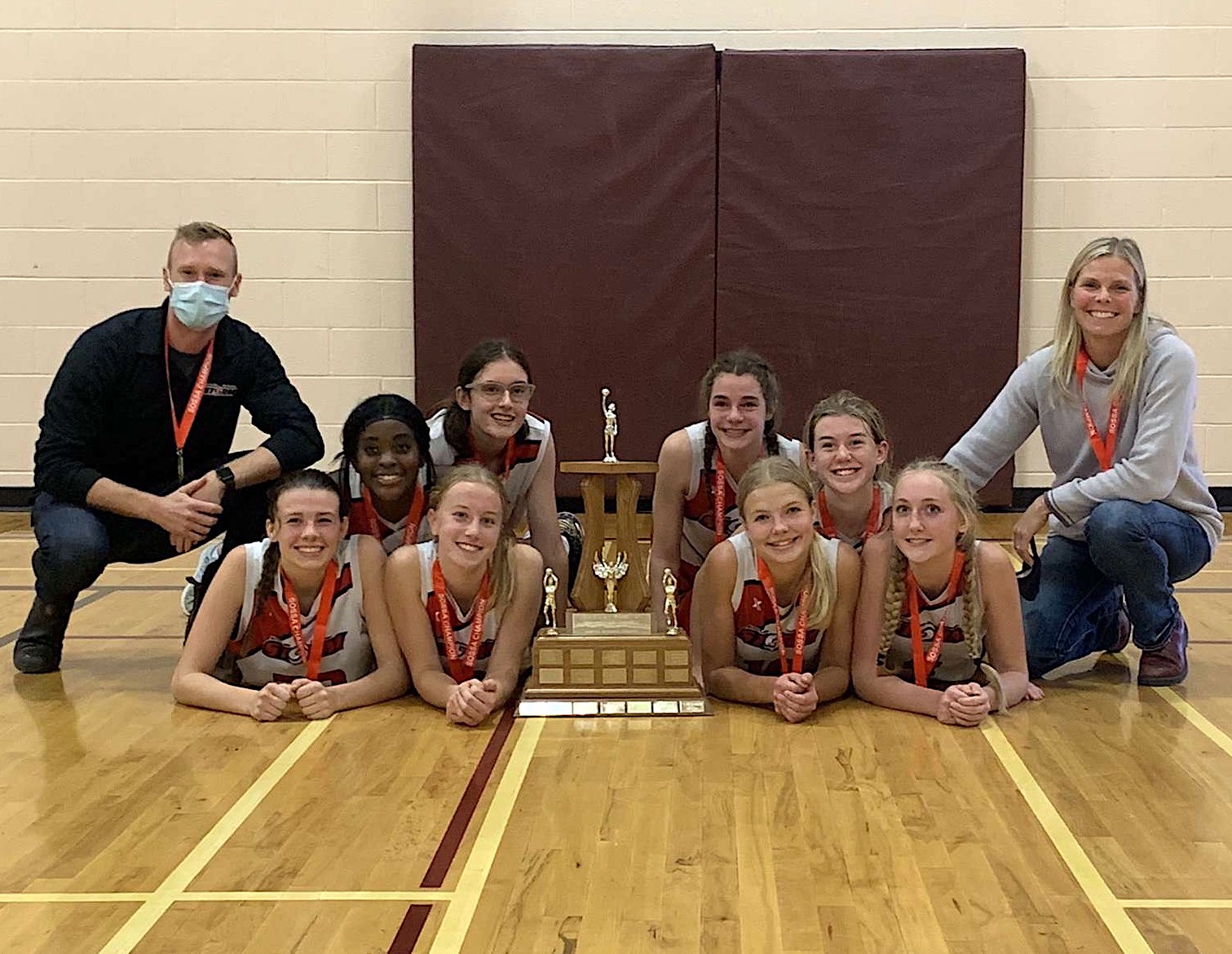