Earlier this spring, the St. Francis rowing program christened the stern of a double/pair in honour of head coach Greg (Smitty) Smith.

This past Sunday, the St. Catharines Rowing Club once again recognized the former national team rower as part its annual christening ceremony.

“As Greg is also an important part of our club and our rowing community, we thought it would be very fitting for us to rechristen the boat today so we could also recognize him,” SCRC president Michelle Kerr said. 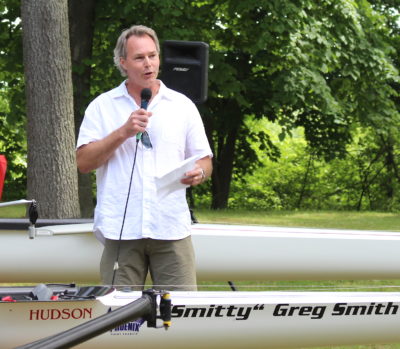 Smith, who admits he’s not the greatest public speaker, thought he didn’t do the first christening justice and felt the second ceremony was an acceptance repechage.

“I didn’t really make it past the line,” he said. “Now I think I can handle this one a little bit better.”

The former SCRC lightweight rower used his repechage to  express his love for the sport of rowing and the local rowing community,

That lifelong love began when he was 13 and recruited to fill in for a Lakeport coxie, who was injured.

“St. Catharines has something special and I realized this 42 years ago as a 13-year-old,” he said. “Until that time, I did not know that this place existed; an island in the middle of the city.”

“From that time forward, I would take every opportunity to ride my bike to the island and explore. I got to know every little nook and cranny in the boathouse.”

He also became familiar with all the groups that make the island exist: the St. Catharines, Ridley and Brock rowing clubs; the Old Boys; the alumni; the CHRC (Canadian Henley Rowing Commission); and, the Henley Island Helpers.

“They are all part of a rower’s experience,” he said.

“When you won a medal, you would run up to buy a hot dog,” he said. “You would show your medal to Mrs. Anderson and you were really excited to show them as they would give you another hot dog and say that ‘This one is on us.’ ”

During his time as an athlete, he was guided by 10 different coaches.

“The athletes have to understand that there is always not just one coach,” he said. “You can’t grow up with one coach and you have to experience many, many coaches and that goes for parents.

“They are going to learn something and let those volunteers who are out here have the opportunity to coach your kid because they will do a great job at it.”

Smith incorporated many of what his coaches taught him into his own coaching style.

He also learned lessons from the umpires and the officials, and the entire rowing community.

“Right here in front of me is something special and that is the St. Catharines Rowing Club.”

And the sport itself is equally special.

“It comes down to the people who are part of the sport,” he said. “It’s about being out on the water and the feeling of the motion of the boat. I was captivated by it from Day 1.”

Nothing was more exhilarating than the feeling of fluidity in the boat.

“It comes down to you and your crewmates,” he said. “You have to make it happen. It’s hard work. You need to learn from and extract something from what your coaches offer in the form of technique or output and apply that knowledge to every single stroke.”

Smith carried on with that sentiment as he poured water on the boat during the christening.

“May this boat carry you across the line at the moment when you can no longer propel it forward,” he said.

Smith thanked his parents and wife Jane for helping make his rowing dreams a reality.

“If it wasn’t for Jane, her backing and her support, then we wouldn’t have been able to achieve what we were able to do in fundraising for boats.”

The double/pair was a joint purchase by St. Francis and SCRC and its part of the club’s Olympic Series. The series was started a number of years ago when the club realized there was a need to increase the number of small boats and sculling boats to supply the club’s junior and senior athletes that were going on to scull at the high performance level.

“It has been a wonderful addition to our club and a wonderful tradition that continues to this day,” Kerr said. “These boats are very important to our club’s crews, especially our sculling program, and because of that we have developed a lot of young and senior scullers and done very well.”