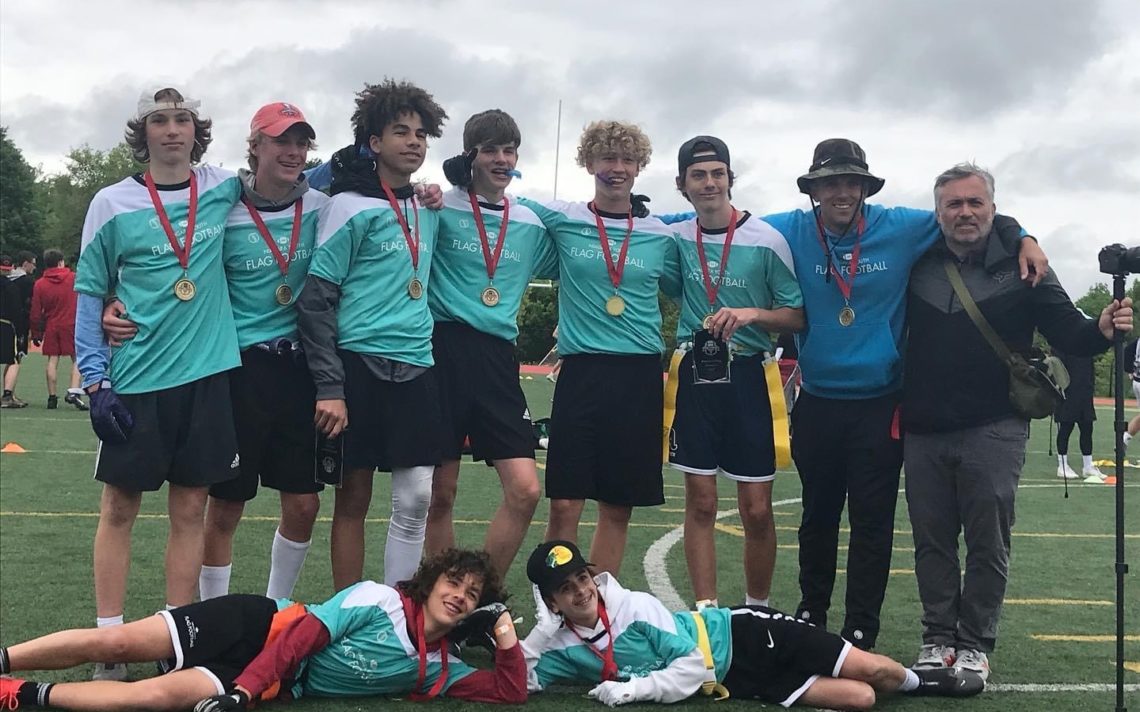 The U12 coed team, the U14 girls and the U16 boys won gold, the U14 Boys earned silver and the U18 and U20 men’s squads brought home bronze medals.

The U16 boys displayed great heart, perseverance and class taking down a strong Hamilton team in the gold medal game to avenge a loss in pool play.

Playing well were: tournament MVP Travis Boland, who was a beast on both sides of the ball, making huge plays all weekend long; quarterback Noah Walters who was named offensive MVP and showed why he was the best QB in the tournament; Dylan Devries was the defensive MVP making big plays all weekend; Trent Dobson, Carson Casasanta, Justin Cournoyea who made massive plays on both sides of the ball; and, Ryder Hall and Eric Corriveau who were a deadly 1-2 punch at rushers.

Coached by Matty Hill, Nathan Greene and John Casasanta, the team moves on to P.E.I. to compete in the Canadian National Championship.

The U14 girls team was devastated to learn starting QB Cate Hawkins was hurt the week before the tournament but they rallied to put on an absolute clinic in an unbeaten run to the championship.

“They rallied and played for Cate and it sure showed,” NYFF founder Matty Hill said.

Contributing to the win were: offensive MVP Danika Spicer who stepped in at QB and led the tournament in touchdown passes; Teagan Clarke who led the way on both sides of the ball as defensive MVP; rusher Aaliyah Henry was a sack machine and a nightmare for opponents; Emmy Rufrano who led the team in catches and had several big touchdowns; and, Aubrianna Marone, Jada Mckinnon, Ella Johnson, Maddie Robbins and Abby MacCormack who all made key contributions.

The team was coached by Alexia Tam and Alex Hill.

The U12 coed team, coached by Herdy Christian and Stefanie and Paul Caporicci, went 5-0 to capture the provincial crown.

Helping the team to the title were: Devonte Christian with strong quarterback play; MVP Lucas Styger who led the team in touchdowns; defensive MVP Hudson Bryan who made big plays all over the field; snapper Anthony Monaco who had a strong weekend and created mismatches all day; Jasmine Henry who was a great receiver and contributed in many ways; Amy Caporicci who made several key sacks and forced other QBS to make costly errors; and, Nolan Gray, Matteo DiFelice, Jagger Dorazio who were all shutdown defenders helping the team record the fewest points in the tournament.

The U14 boys, coached by Jeremy MacLeod, Clifford Ivory and Terrance Murray, competed fiercely and had chances to win the championship game but lost to a much older team.

Playing well for hardworking squad were: team MVP Ezra Ivory who displayed his amazing skill, heart and class as usual; Owen Saunders who stepped up as a defensive MVP and made massive plays; and, Richard Jaynes, Kiptyn MacLeod, Gabriel Murray, Caleb Bahati, Stephon Savoury, Luca Romeo, and Mahkyi Goguen who all made key contributions.

The team will compete at the NFL Flag Canadian championships in July.

The U18 men’s team, made up of A.N. Myer players, got better every game and won the bronze medal in a very competitive division.

“It was the first time this team did a flag football tournament and it did not disappoint,” Hill said, of the team coached by Dave Buchanan.

Made up of Myer players and all-stars from the NYFF high school touch league, the U20 men had a solid showing.

“The gold and silver teams were hand-picked Ontario teams so for this young team to be right there in games with those teams speaks volumes of the talent and work ethic this team has,” Hill said, of the squad coached by himself, Dan Pepe and Mike Goforth.

Playing well for the squad were: brothers Tyler and Evan Goforth who connected for several touchdowns; Arden Martinez, Aidan Atkins, and Quinn Johnston who dominated on both sides of the ball with their athleticism and strong physical play; Eugene Park who left his body on the line for the team playing both ways all weekend; and, rushers Deej and Mitch Casucio who were great players and teammates all weekend.

Brannon Russel sustained an injury that knocked him out of the tournament and the team wishes him a speedy recovery.