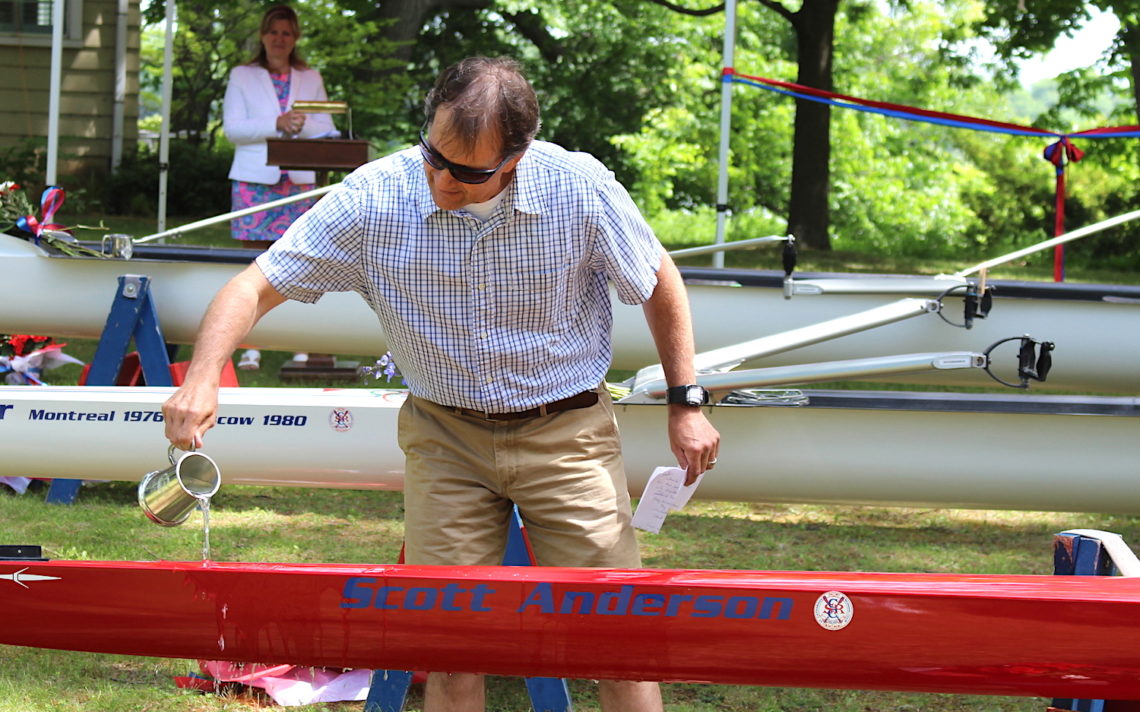 Tom Kent, a former St. Catharines Rowing Club director, had the honour of introducing his best friend Sunday during a christening of a single in Anderson’s honour on Henley Island.

“We all know Scott Anderson cares,” Kent said. “He cares about everyone who rows, he cares about their goals and he cares that they are enjoying the rowing experience. 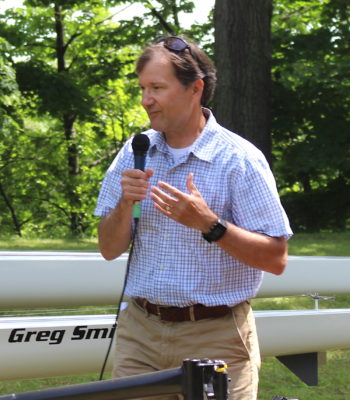 “He teaches them to respect each other, he teaches oarsmenship, he is not just out there driving them up and down the rowing course as hard as they can go. Scott is a technician of rowing.”

Anderson was humbled by the honour bestowed upon him by the St. Catharines Rowing Club.

“I believe that all the things I achieved were due to relationships and relationships with all the people that were involved with rowing,” he said.  “I was very fortunate to have known some amazing athletes I got to tag along with and made my rowing career pretty successful.”

He thanked his mother and father for moving to St. Catharines and the many rowing families who lived on the street the family settled on.

“Because of those people, we had that almost inevitable opportunity to row and it pointed me in a direction that I was meant to do.”

Rowing was truly a family affair for the Andersons. Father Jim was a former captain and president of the St. Catharines Rowing Club. Mother Nancy is a long-time volunteer at the regatta office. Sister Lesley was a national team rower and Olympic cox in 1984. And son Cameron and daughter Anna both rowed for West Park and the St. Catharines Rowing Club.

Scott thanked his wife Janet for all she does to make him a rowing success.

“She keeps me grounded and gives me a kick in the pants every once in a while to make sure that I am grounded.”

Anderson rowed in high school with Sir Winston Churchill and won two gold medals at the Schoolboy championships. At the club level, he won numerous Henley and Head of the Charles medals as a member of the St. Catharines Rowing Club.  Anderson also rowed on the Canadian national team for five years and won a bronze medal in the lightweight four at the Pan Am Games in 1987.

As a masters rower, Anderson won several more Canadian and Head of the Charles medals and, in 2010 at the world masters championships in St. Catharines, he won a gold medal.

As a coach at Sir Winston Churchill, Lakeport and Holy Cross, crews that Anderson coached won more than 15 Schoolboy gold medals. In 1996 and 1997, he coached the Holy Cross boys to the Schoolboy points title.

He is currently coaching lightweight men at the St. Catharines Rowing Club and his crews have won countless Henley golds in the four, eight and dashes.

In the board room, he was a former director of SCRC and vice president of rowing.

Like all the honourees who followed him, Anderson christened the boat by pouring water on it.

“May the athletes who row this boat, row with grit and determination,” he said, as he poured the water. “I want the athletes to hunt down their competition like a shark.”

This is the first of four stories profiling athletes and coaches who had boats christened in their honour by the St. Catharines Rowing Club.