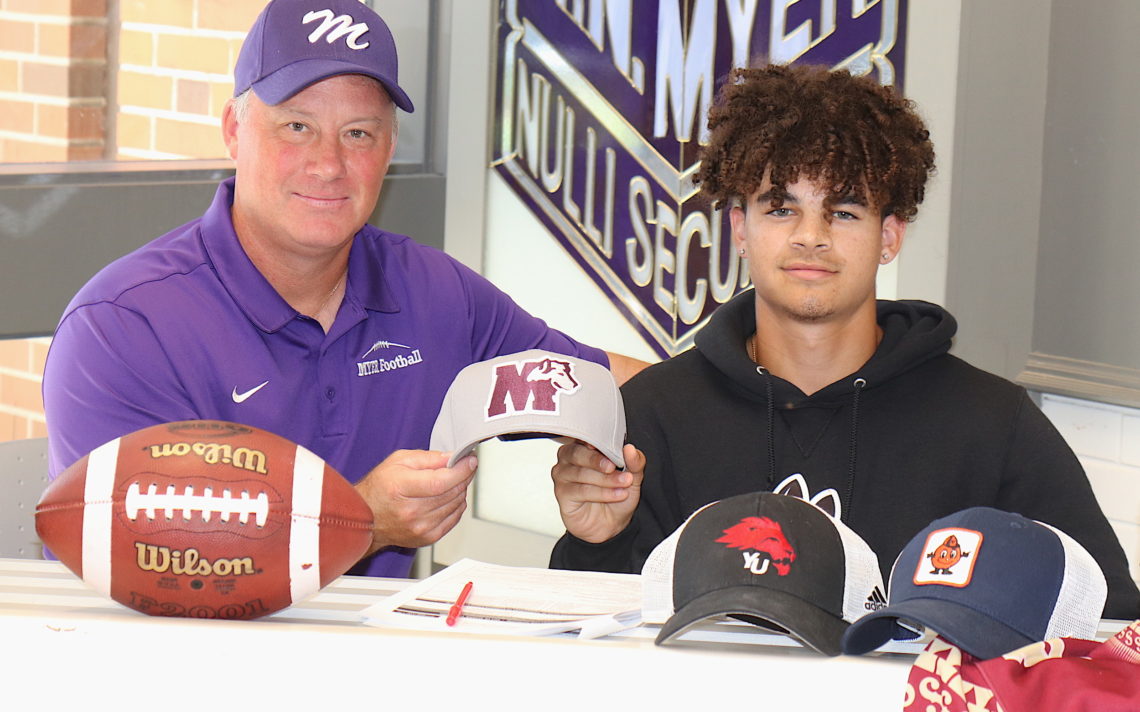 Alex Walters decided to try a prep football program the summer heading into his 12B year.

“They didn’t give me that same welcoming feeling that I got at Myer for so long,” the 18-year-old Niagara Falls resident said. “I was supposed to stay with them through the fall but I decided to come back to Myer.”

Walters spend his 12B season playing running back, slot and receiver for the Marauders and that moved paid off this summer when he committed to play football at St. Mary’s.

His short prep school experience made him appreciate what the Huskies were offering.

“Saint Mary’s was one of the earliest teams to reach out to me and the feeling I got from (associate head) coach Tommy Kanichis was just extremely welcoming. He made me feel at home and he made me feel wanted. Compared to the other schools, it was a big step up being wanted.”

Walters started playing football in Grade 9 at Myer and that was his path to play at the next level. He played cornerback until Grade 10 when coach Dan Pepe suggested he try the other side of the ball.

“He saw me playing in the seven-on-sevens and he said ‘That is a receiver, not a corner. We have to switch him over.’ Since then, I have never looked back. I kept on training as hard as I could, I perfected my craft and my coaches have been a huge support for me along the way.”

Walters believes he has gotten quite a bit better in the past year.

“I improved my route running a lot and I tried to work on expanding my strengths,” the soon-to-be business major said. “I am obviously not the big, tall, possession-type receiver and I am more of a shifty, yards after the catch kind of route-running receiver. I have been working on expanding that so that is separates me from all the other receivers.”

Myer head coach Dave Buchanan has enjoyed having Walters on his roster.

“He is a really dynamic player and shifty. He is a bit undersized but he is strong for his size.”

“He has a really good burst and that is what St. Mary’s saw in him when they looked at the film. In space, especially in the Canadian game, he can make people miss.”

Like all freshman players at the USPORTS level, Walters has work to do. He needs to get bigger, stronger and faster and go through the grind.

“A lot of the times it is being able to maybe not deal with starting right away and being able to handle that. If he sticks to it, he does have that ability to be dynamic so he will likely go in for certain packages,” Buchanan said. “He can also play some special teams too and in the short term, I can see him doing that.”

Walters isn’t going in expecting to be handed a starter’s role. He knows he will have to pay his dues.

“I am going to take anything I can get,” he said. “The coach has already told me that they already have their guy in the slot position and that is where he wants me. They like how I play and the guy they have there now is going to the CFL. I will be able to learn off of him.”

Walters has no problem with that scenario.

“It is huge because I will be able to learn from his game and see why he is so good. Hopefully I can take something from that and use it to get myself in the CFL.”

He will also be spending plenty of time working on other things.

“There is going to be lot of weight training.”

“It is going to be great to be in a football atmosphere again and put the pads back on.”