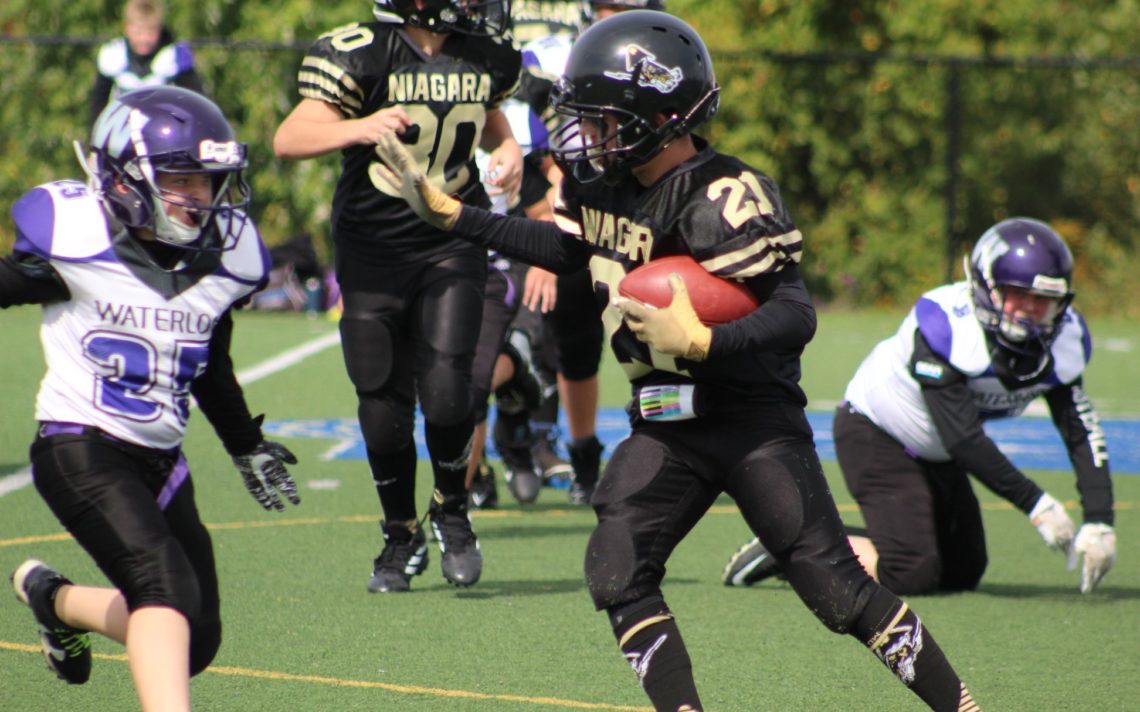 The Niagara Generals bantam football team improved to 3-2 in Ontario Football League play with a 33-0 victory over the Waterloo Predators (1-4).

“Niagara’s defence had a point to prove this week after giving up 60 points last week,” head coach Jim Storin said. “The Generals came out strong and held Waterloo to very few first downs and only one drive that made it into their (Niagara’s) own end.”

“In a game where we were short-handed due to injuries, our Generals stepped up their game with some of our boys having to go both ways,” Storin said. “Our defence was solid this week and our boys stepped it up,”

Quarterback David Robinson marched the offence up and down the field and Niagara scored on all but two drives. Clayton Wilen led the way with three touchdowns and Francesco Dalla-Valentina added a pair of majors.

“On offence, we have some first-year Generals  leading the way and some first-time offence guys playing key roles and showing their diversity in how they play this game,” Storin said.

Next up for Niagara is a Sunday road game in Guelph.

Myer’s offence built a 24-0 halftime lead and then its defence shut GFESS down to record the team’s second straight shutout.

The Niagara Spears travel football organization recently handed out its awards at its year-end banquet.

For the varsity team: Chase Bowden was named the offensive MVP and the winner of the Zack Duguay Award; Daniel Clarke was the defensive MVP; Ty Bennett was named the top lineman; and, Gabe Hetherington was recognized as the most improved player.

On the junior varsity squad: Josh Morley was named the offensive MVP; Tommy Leavens was the defensive MVP; Matthew Elia was recognized as the most improved player; Noah Chase was selected as the top lineman; and, Nick Ciriello won the Zack Duguay Award.

For the bantam team: Nick Longo was named the offensive MVP; Matthew Gichard was the defensive MVP; Cole Haan was recognized as the most improved player; Ryan Broome was selected as the top lineman; and, Joey Dilse won the Zack Duguay Award.

Tre’s brother, Tyrell Ford, had a 70-yard interception return for a TD and four solo tackles.

Other locals also contributing to the win were Rushon Dagelman (A.N. Myer) with a 34-yard reception and Jack Andrews (Denis Morris) with a solo and an assisted tackle.

Anthony Federico (Saint Michael) had one solo tackle and one assisted tackle in a losing cause as Queen’s fell 52-16 to Laurier.

Chase Bowden (Stamford/Westlane) caught an 11-yard TD pass and had 15 carries for 44 yards but it wasn’t enough as the X-Men fell to Mount Alison.