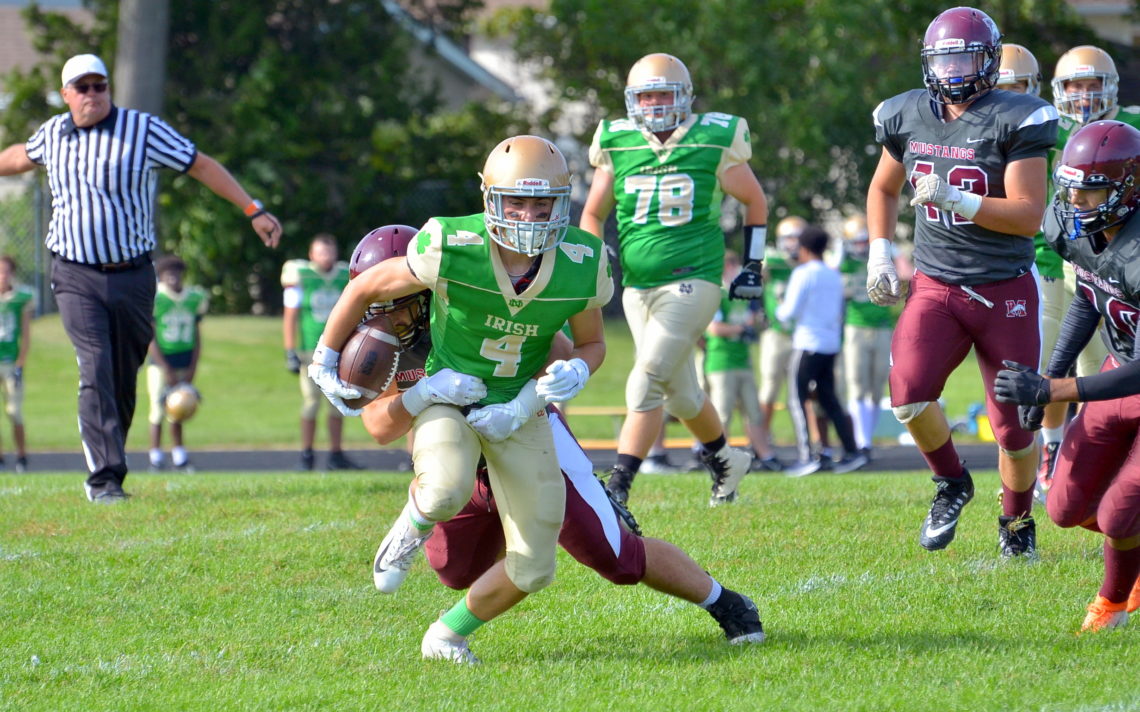 “It was a step in the right direction,” Thorold head coach Duane Kemp said. “We were a little more crisp on offence, but still didn’t execute enough to compete with the better teams in Tier 2.”

Kemp was happier with his team’s defensive performance.

“Bend but don’t break was our mentality and our conditioning made a difference as Collegiate had several injuries,” he said. “Collegiate played hard and schemed well with the talent they have.”

On offence for Thorold: Yvan Canlas was 7-13 for 130 yards and scored on a quarterback sneak; Matt York grabbed two catches for 56 yards; and, Callum McNamara scored on a 17-yard run.

For Collegiate: Joseph Waterman had 12 carries for 88 yards and was 2-5 passing for 31 yards; Ethan Taylor rushed the ball seven times for 32 yards; and, Tyler Gearing had a great game on defence, recording six tackles and two sacks.

“With a depleted lineup, we moved the ball consistently,” Collegiate head coach Nathan Greene said. “We made some big plays on defence and forced numerous punts.”

Greene and his coaching staff are hoping their injured players will be able to return to the lineup in the upcoming weeks.

“When these players are back, we will improve instantly,” he said. “In the interim, younger players will continue to get the reps in meaningful situations and that is positive for the future.”

Collegiate fell to 0-2 with the loss.

Ryan Neudorf rushed for 196 yards and four touchdowns to power the Grimsby Eagles (1-1) to a 37-1 victory over the Eden Flyers (1-1) in NRHSAA Tier 2 senior football action.

Also adding points for Grimsby were: Nathan Duncan, who caught an 18-yard pass from Evan Reece; and Connor Craftchick who recorded a safety with a sack in the end zone.

Leading the way for Grimsby on defence were Liam Bogucki with two interceptions, and Connor Nokes and Brady Beijes with single interceptions.

“We were outplayed from beginning to end,” Eden head coach Jeff Webster said. “Grimsby had a well-prepared team which capitalized on most of our mistakes.”

As the game progressed, Webster felt his team was hurt by its lack of depth and experience.

“But as head coach, I should have had the players we did have more prepared for situations like that,” he said. “We will make a few needed  changes before next week and we will get better. Today was just not our day.”

“Defensively, I thought we played well at times, but we need to be more focused and work on our pass coverage,” Irish head coach Tim Bisci said. “Offensively, we moved the ball and had a couple of drives.

He felt his offence was a bit more in rhythm compared to last week.

“We still need to do the little things better.”

Leading the Irish attack were: Zack Melnyk, TD runs of 26 and 62 yards; Bryce Livingston, 60-yard TD catch from Hunter Cropper; Cropper with a TD on a one-yard QB sneak; Jacob Succar with a 22-yard TD run; and, Cole Smith with four converts.

The Saint Paul Patriots senior football team pushed its NCAA record to 2-0 with a 38-0 shutout of the Lakeshore Catholic Gators (0-2).

Scoring for the Patriots were: Enzey Youyoute with 12-yard and 10-yard TD runs; Jarrell Pappin with a six-yard rushing major; Devon Schiller Cleveland with a 10-yard TD run and a 40-yard TD pass to Javier Lewis; and, Nick Abbruscato with five converts.

Defensive standouts for Saint Paul were defensive ends Ethan Watson and Jesse Murphy with multiple sacks, and linebackers Pappin and Rielly Sexton with many tackles.

“I am proud of the way the boys are being physical each and every game,” Saint Paul coach Paolo Sirianni said. “Our experience players are demonstrating leadership. These boys overcame adversity last year and will continue to do so this year.

“Lakeshore’s staff should be proud of the way they competed today.  We know we are in for a tough game next week versus St. Francis so we will have to make sure we eliminate mistakes when we play them.”

The St. Francis Phoenix improved to 2-0 in NCAA senior football action with a 27-21 victory over the Blessed Trinity Thunder (0-2).

No information was available about the Phoenix scorers.

For Blessed Trinity: Owen Jones recorded a rushing and a receiving major; Corbin Paterson scored a major on a run; and, Hunter Oakley booted three converts.