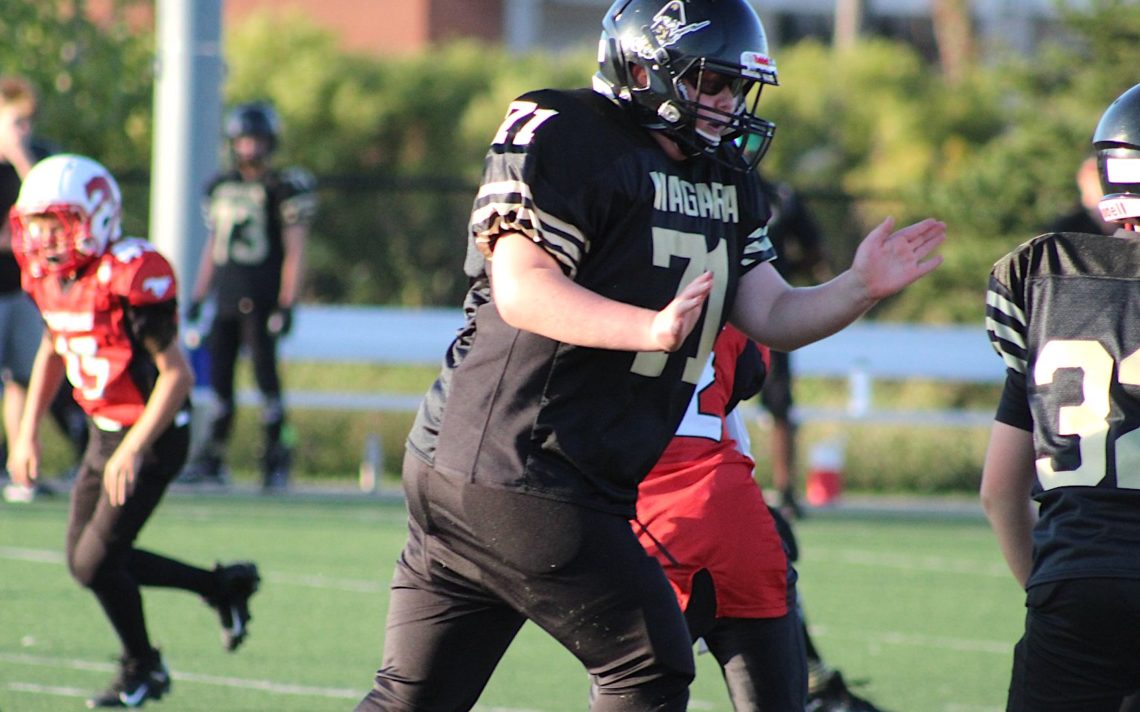 The Niagara Generals bantam football team pushed its Ontario Football League record to 2-1 with a 65-0 romp over the Burlington Stampeders.

“Our challenge was to keep our composure and maintain discipline during the game,” head coach Jim Storin said. “We have been on the other end of the field in the past and for our boys to step up the way they did and continue to play hard while respecting the game was awesome.

“We have to maintain the intensity as there will be other games that won’t come so easy.”

The victory was a total team effort.

“We had a number of players step up today and raise their game,” he said. “It makes us proud as coaches to see this.”

Niagara’s defence held the Stampeders to only three first downs and recorded a safety in the process. Strong performances were turned in by lineman Landon Tracey, linebacker Brodie Storin, halfback Elijah Jama and cornerback Kieran McDonald.

“Niagara’s offence took their cue and did not let up either,” Storin said.

“They set the tone and made it possible for our offence to rack up 304 yards rushing and 159 yards in the air and score nine touchdowns.”

Niagara is at Brantford Saturday.

In OFL peewee play, the Niagara Generals dropped a hard fought 42-39 decision to the Guelph Gryphons.

“We need to tighten up our defence, but we will make our adjustments and come back stronger,” peewee head coach Bruce Macrae said. “A small team makes a tired team and a proud coach.”

For Niagara: Ezekiel Langendoen rushed for more than 100 yards and scored five majors and Cameron Macrae ran for 75 yards and had two converts.

“Our defence fell short, but not for a lack of effort by many boys who did not leave the field,” Bruce Macrae said.

Also for Waterloo, Rushon Dagelman (A.N. Myer) had three catches for 40 yards and two kick returns for 27 yards. Justin Succar (Notre Dame) had one kick return for 10 yards for Waterloo.

For Guelph, Jordan Terrio (Saint Paul) had two receptions for 46 yards and a 41-yard punt return.

Anthony Federico had one solo tackle, four assisted tackles and a half sack to help Queen’s (1-3) record a 15-8 victory over Windsor (1-3).

Among the Saint Michael graduate’s tackles, 1.5 were for losses.