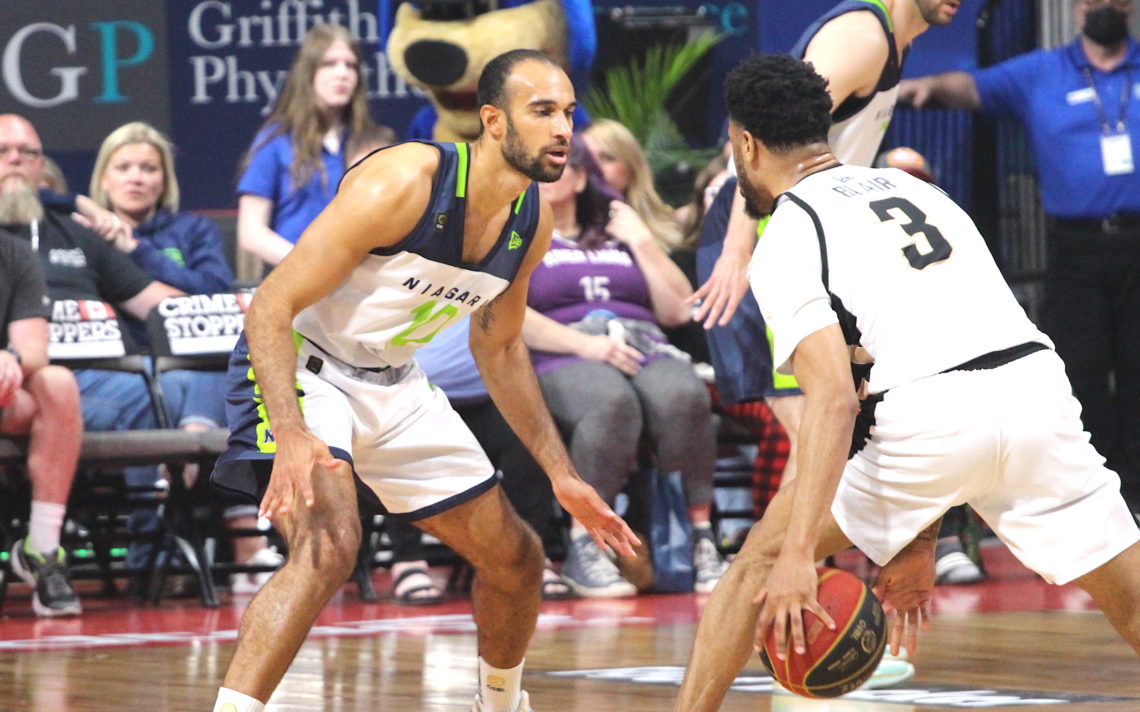 Phil Scrubb was more than happy to return to the Niagara River Lions and play for his hometown team this summer.

“I live here in the summers and obviously I enjoyed playing last summer and playing for Vic (Raso) and all the coaching staff here,” the 29-year-old native of Richmond, B.C. said. “It is a good way to stay in shape and train for the European season.”

The five-time USPORTS champion has spent the last three or four summers in Niagara and is getting married in the region this summer to his fiancé Alexandra Trivieri. He met her at Carleton when he was training in the summer. He is trying to help prepare for the wedding.

“She has done a lot of the work and I am being supportive and trying to do as much as I can.”

Last summer with Niagara was enjoyable for Scrubb.

“The organization is really good, they always bring in lots of good guys and good players and the coaching staff cares a lot about the team. It is a great team atmosphere.”

Scrubb has had a lengthy pro career and he hasn’t lost his motivation.

“I have enjoyed playing for a long time and I think now that it is my job I still have to find motivation in getting better as a player,” he said. “It comes in the small things. It’s just being part of a team, trying to get better with the team and win and that’s what keeps me going.”

He feels he is still improving.

“I’ve noticed that I have gotten better at some things. I have a good base that I keep every year but every summer and every year I try and add something new.”

In the past couple of years he has become physically stronger, is a better defender and a better passer.

“Stuff like that I have tried to work on since I came out of college and played professionally.”

One thing that had definitely changed is the way he trains.

“When I was younger, I spent a lot of time in the gym, a long, long time putting up lots of shots and now I try to work a bit smarter and take care of my body a little more.”

He has no plans to retire any time soon.

“As long as I enjoy it and as long as I am playing at a high level I will keep going.”

This past season, Scrubb started his overseas campaign with Avtodor, a team that plays in the top Russian league, VTB United, but left along with two American teammates after 10 games when Russia invaded Ukraine.

“A week before it all happened, I was with the national team and when it started happening I decided not to go back. The team was nice enough to let me go.”

He ended up with Monbus Obradoiro of LIga ACB in Spain

Scrubb took a couple of weeks off before joining the River Lions. It was a much-needed break.

He believes this year’s version of the River Lions is improved compared to last season’s roster.

“We are very, very athletic across the board and we are very long, especially defensively. We have games where we get a lot of stops, rebound and get out in transition. Last year, we may have been a little more slower-paced.”

Scrubb thinks the roster reflects what is happening in basketball in general.

One thing that hasn’t changed is Niagara’s desire to win. The River Lions lost in the CEBL championship game in 2021.

“It is tough to forget losing in the finals but it is a completely new team and new guys and we just want to focus on winning every game we play. You don’t want to think too far ahead or back.”

Raso loves having Scrubb on his roster.

“Phil is really competitive and he has been competitive for a long time. His skills have developed,” he said. “He can shoot the ball, he can defend, he understands what we are trying to do, he provides leadership and he has an understanding what it takes to be a great teammate.”

Last season with Niagara, Scrubb averaged 16.1 points, 3.5 rebounds and 4.8 assists in 31 minutes of playing time. Heading into Friday’s home game against the Newfoundland Growlers, he was averaging 15 points, 3.0 rebounds and 1.5 assists per game.

In a 98-97 victory against the Growlers, Scrubb had 15 points, nine assists and three rebounds.

Top performers for Niagara were: Khalil Ahmad with 21 points; Jaylen Babb-Harrison with 13 points and five rebounds; and, Oluseyi Ashaolu with 15 points and four rebounds.

Leading scorers for the Growlers were Brandon Sampson (26), Jahvon Blair (24) and Khalil Whitney (18).

Niagara hosts the Saskatchewan Rattlers Sunday at 4 p.m. at the Meridian Centre.