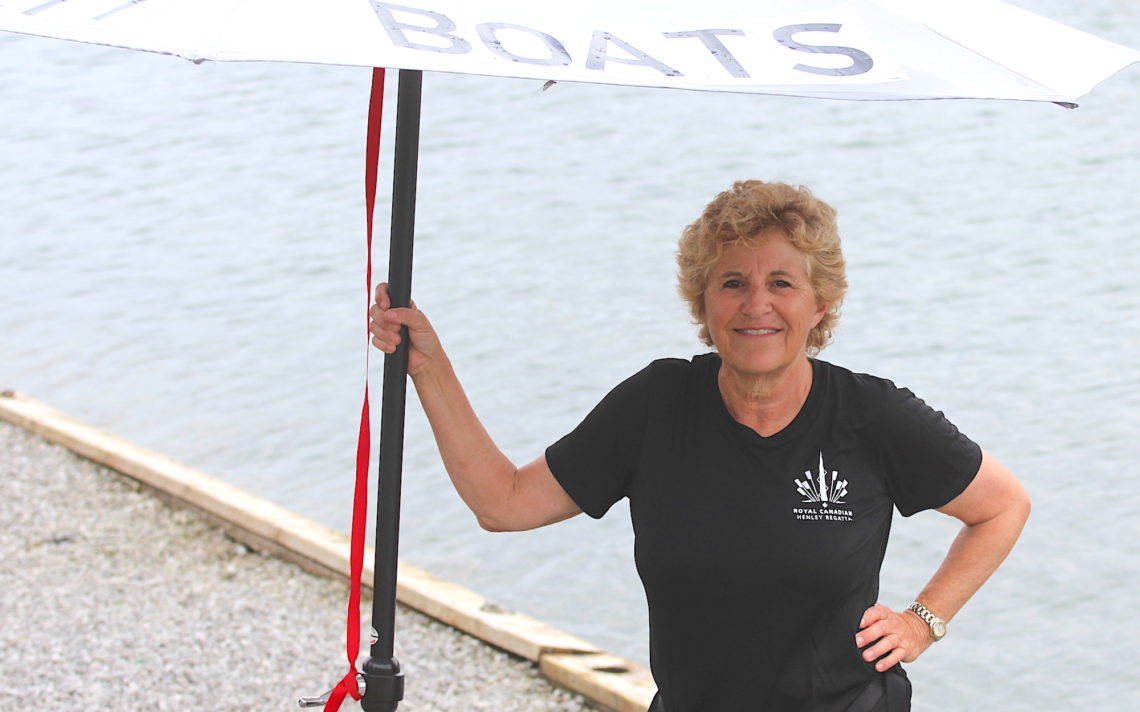 It’s another hot and steamy day at the 136th Royal Canadian Henley Regatta and Sandy Meyers is at her post near the launch dock on Henley Island.

Beneath a faded umbrella labelled Safety Boats, the 63-year-old St. Catharines native stands near a blue cooler full of peaches from her Niagara-on-the-Lake farm.

“I bribed my people with peaches to sign up,” she jokes. 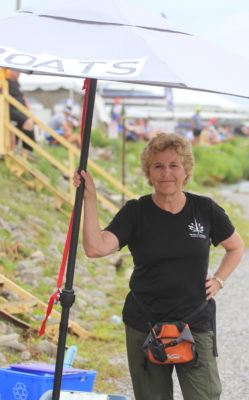 “I thought I was signing for one thing and I got the whole thing and gladly,” she said. “I restructured how it was going to go and it has worked out really well.”

Meyers and two other supervisors oversee the 89 volunteers on course when racing is being staged.

“It’s not realistic to come here at 5 (a.m.) and leave at 10 (p.m.), especially during farming season so I made spots for three supervisors and everyone has been awesome,” she said. “I have some really knowledgeable, talented guys with a wheelhouse of experience that you can’t believe.”

“I do come back some nights just to make sure everything is locked down, but I haven’t had to do that the last couple of nights,” she said Wednesday.

Meyers has been impressed with her crew’s performance.

“All of these 100 people are amazing,” she said. “They are kind, they are compassionate, they are fun loving, they have been so generous with their volunteerism and it makes it so easy for me. My radio is not going off, they are doing everything they should be doing and they are good.”

All the safety boat volunteers are guided by a common philosophy.

“The one thing we all agreed on is that no matter who we are coming upon, whether it’s a rower or an umpire or anyone on land, it’s kindness,” she said. “And when rowers flip in the water, it’s compassion because there are some hopes that might be dashed. We can flip them over, but part of our job is to make them get back up and keep going.”

Regatta chair Peter Scott has been impressed with  Meyer’s work.

“She has taken control of this entire course which leaves us one less headache to deal with,” he said. “She reached out, assembled a team, works well and is a good communicator.”

And she has definitely taken charge.

Meyers’ introduction to rowing came when her son, Jordan, started rowing at Ridley College. She was recruited to help with interactions with parents and the support staff at regattas.

“I had my son at 40 and it was the best gig going. What’s not to like about this eh?” she said. “There’s all kinds of kids and coaches and all kinds of people to meet. The kids are just wonderful and I am sure you have met some of the other volunteers. These people are amazing and I know a lot of them.”

She encourages everyone to become a volunteer in whatever area of the community they are interested in.

“It’s great to be involved in the community,” said Meyers, who has also volunteered at Ribfest and Wingfest.

“If you stay engaged in your community and with people, it is a good way to live your life,” she said.

She has also become a participant in the sport of rowing, joining a recreational program when she was 55. She coxes one boat and rows in a quad three times a week in the morning.

Meyers didn’t take part in the masters portion of the Henley regatta.