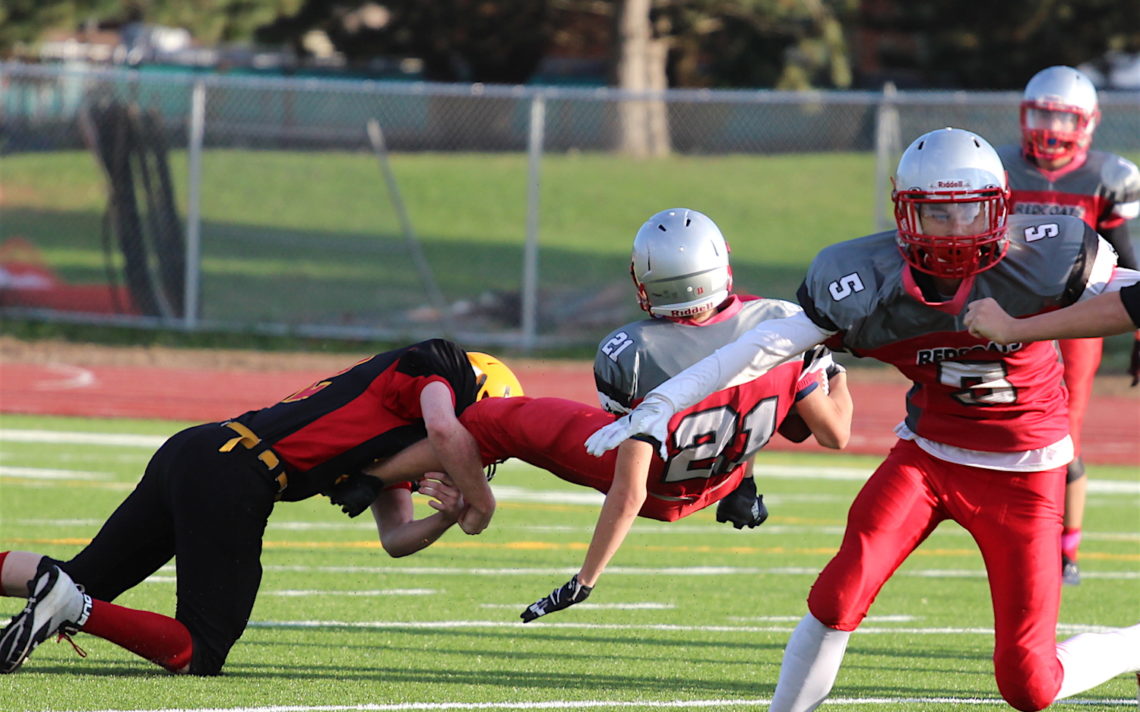 There was great joy in Collegiateville Thursday afternoon following a 14-11 victory by its football team.

The victory for the St. Catharines Collegiate Saints over the Governor Simcoe Redcoats (2-3) was their first of the season and improved their record to 1-4 in Niagara Region High School Athletic Association Tier 2 play.

Chris Ciede scored on TD runs of 65 and 28 yards for Collegiate and Justin Crawford sparked the offence with a pair of interceptions.

“It was a great team effort and we have been working on that (defensive) model all year,” Saints defensive coordinator Jonathan Broom said. “Everyone has a job, everyone has a responsibility and everyone does it as a unit, and today we were finally able to put it all together.”

The Saints overcame a number of obstacles to post their initial victory. 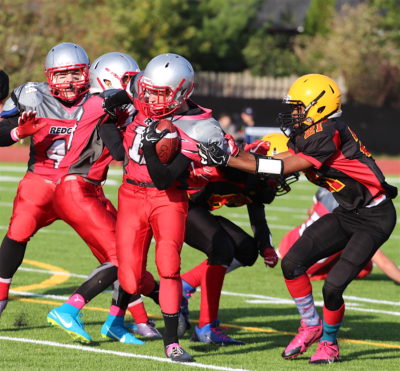 “We had a short bench and lots of issues with people being hurt but it really worked out well,” Broom said. “Everyone stepped up and did their jobs and, as a coaching staff, we are all proud of what they accomplished.”

After the game, the Saints celebrated like they had won the Super Bowl.

“As you can hear in the background, all of them are very happy,” Broom said. “Some of the kids haven’t won a game ever in their career and for some of them, this is brand new.”

For the Redcoats: Nicholas Langelaan scored on a five-yard run and had a fumble recovery; Andrew Scott passed to Jordan Wayland for a two-point convert; Spencer Stone recorded a single point on a punt, had two fumble recoveries and a blocked convert; Danny Lewis recovered an on-side kick; and, Nicholas (Spanky) Spanyi added a fumble recovery.

“We didn’t execute on some of our big plays, we dropped a lot of balls and we couldn’t stop 27 (Ceide),” Redcoats head coach Jamie Brophy said. “He was really tough and he would get to our second level (of defence). He’s not only a tough tackle, he’s fast.”

Brophy is confident his squad can regroup.

“For us, it is just executing the little things,” he said. “We had lots of opportunities to be successful but we dropped too many passes and fumbled the ball at times when we shouldn’t have.”

The Grimsby Eagles (4-1) grabbed sole possession on first place in Tier 2 NRHSAA senior football action with a 17-8 victory over the Eden Flyers (3-2).

Justin Defaria booted a 38-yard field goal for the Eagles and returned an interception for a TD with under a minute left to seal the victory for Grimsby.

“Our defence played really well today,” Grimsby coach Zack Silverthorne said. “We challenged them this week as we were giving up too many points.”

Unfortunately, things didn’t go so well for the Eagles on the other side of the ball.

“Our offence was sloppy with too many bad exchanges and balls on the turf,” Silverthorne said. “That needs to improve.”

Eden’s defence made it difficult for Grimsby to move the ball.

“We must improve our attention to detail to keep drives moving,” Silverthorne said. “Even though we made a lot of mistakes, we found a way.

For Eden: Evan Langendoen scored on a five-yard rush; the defence recorded a safety; and, Sam Pynn had a sack.

“We came out firing and scored on the first drive after forcing a two and out on Grimsby’s first possession, but we couldn’t build off of that success,” Eden coach Jordan Smith said. “It’s frustrating to let a game go that I think we could have won, but I am sure we will see them again in the playoffs.”

The Lakeshore Catholic Gators improved to 2-3 in Niagara Catholic Athletic Association senior football play with a 28-16 victory over the Holy Cross Raiders (0-5).

The Gators were led by Eric Ruigrok, who scored on runs of seven, 40 and 60 yards, and caught a 60-yard TD pass from Corey Vazquez.

For Holy Cross, John Serrano returned a kickoff for a major and Tinashe Dandato scored on a one-yard run.

The St. Francis Phoenix (2-3) concluded the NCAA senior football regular season with a 18-12 victory over the visiting Saint Michael Mustangs (2-3).

For the Phoenix, Dean Gentile booted four field goals and Alberto Repetto scored on a five-yard run in the third quarter.

For the Mustangs, Riley Hart scored a pair of touchdowns.