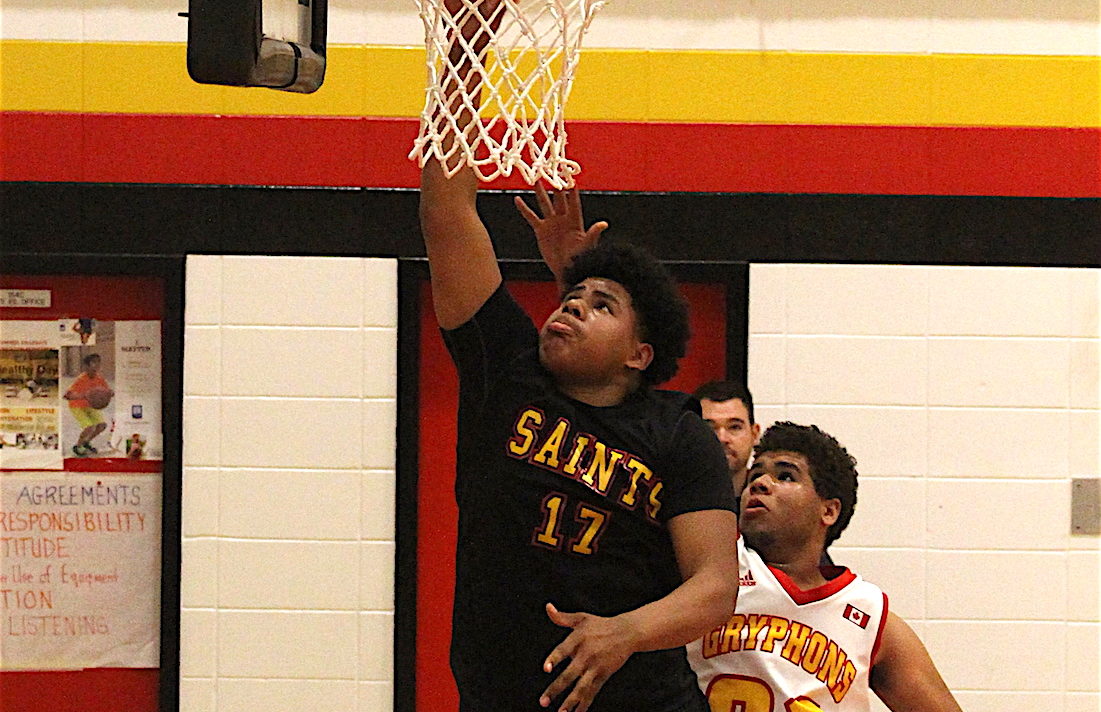 At 6-foot-2 and 250 pounds, Robert Smith is a huge presence on the roster of the St. Catharines Collegiate Saints basketball team.

Lining up at defensive end, he’s also an important part of the school’s football team, but it’s clear where the 18-year-old’s loyalties lie.

“I play football, but I like basketball better,” the 12B student said, after scoring 22 points Thursday as the Saints fell 66-64 to the Greater Fort Erie Gryphons in Standard Basketball Tournament consolation semifinal action. “I like the competitive nature of it, being able to play with my friends and being able to excel.” 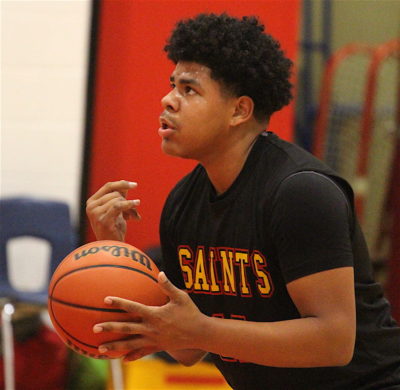 Smith scored the first 12 points for his team Thursday and didn’t come off the floor after starting the game on the bench.

“I get tired but hopefully there’s a foul or something or they call a timeout so I can get my breathe back,” Smith said. “Usually I am OK.”

“He’s a great player and a team leader,” he said. “He works really hard under the net and he gets a ton of playing time because of his work ethic.”

“He finishes around the net, rebounds well, passes well and he’s a big presence under the basket.”

High school hoops is his favourite part of the sport.

“Getting to play with my friends is the best part of basketball.”

Smith is hoping to play basketball at the college level and would love to play at Niagara College, but he has had no contact with the local school.

He knows what he needs to improve to play at the next level.

“I just want to work on my jump shot and handle more,” he said.

Trailing 61-56 with less than four minutes left in the game, Collegiate rallied to take a 62-61 lead but couldn’t hang on.

I thought we had it but that’s OK,” Smith said. “We just needed to pick the slack up on defence and we didn’t do it.”

The Saints spend the whole game trying to erase an early deficit.

“We got off to a slow start defensively but in the second half we picked it up and that helped us get back in the game,” Krzeczkowski said “That was great that we were able to take the lead but we just couldn’t hang on to it.”

Grimsby was breathing a sigh of relief when it was all over.

“That was a great game,” Greater Fort Erie coach Dave Adamek said. “We were missing two starters and I was a little nervous.”

Thankfully for the Gryphons, a pair of Grade 10s picked up the slack.

Other big contributions came from Grade 12 guard Ethan Vanatter with some key threes down the stretch and Bailey Wangler who scored in double digits for the Gryphons.

Greater Fort Erie was missing its post player and power forward due to illness and injury but did enough to hang on down the stretch.

“I was a little nervous under the net but I told our guys we had to get some transition points and we need some guys to step up,” Adamek said. “We needed some heroes today.”

BPSN Star of the Game: Collegiate’s Robert Smith with 22 points and 12 rebounds.

Up next: Greater Fort Erie advances to play Eden/Lakeshore Catholic in the Standard consolation final Friday at 5:30 p.m. at St. Catharines Collegiate.