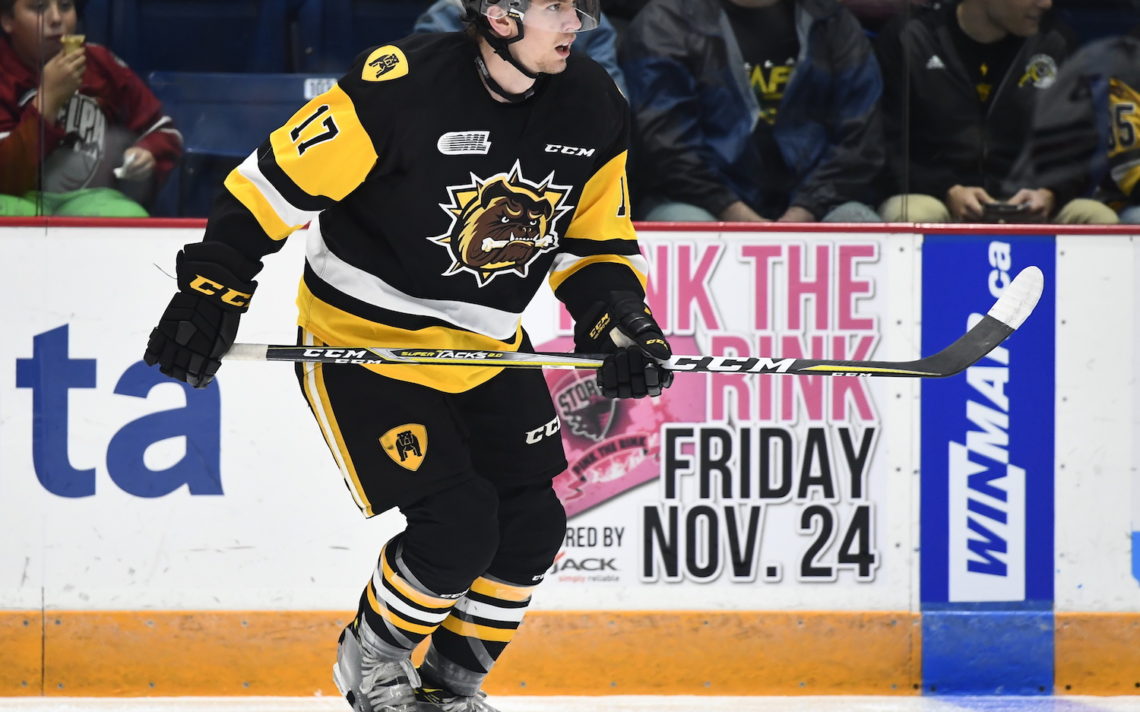 Saigeon turns his game around

Brandon Saigeon has managed turn a huge negative into a positive.

The 19-year-old Grimsby native suffered through an injury-plagued draft season two years ago that saw him break two bones in his forearm which caused him to miss a considerable chunk of the year and be passed over at the National Hockey League draft.

Following a solid rookie season in Belleville, Saigeon was predicted by some to go perhaps as high as the first round in the 2016 NHL Draft, but the injury and as well as an off-season ankle problem, cast a shadow on his career.

Saigeon returned with a better season last year with 21 goals and 49 points in 66 games following some suggestions — subtle and otherwise — by the Hamilton coaching staff he round out his game and pay more attention to details and defence.

This season, Saigeon has put it all together and seems to finally be fulfilling the promise that made him Belleville’s first round (sixth overall) selection.

Saigeon is second in team scoring with 27 goals and 54 points and is tied for the team lead in plus-minus at plus-22.

That earned Saigeon a ranking by NHL Central Scouting in their recent mid-term ranking of 143rd among North American skaters for the 2018 NHL draft in Dallas.

“It’s nice to be recognized by the Central Scouting group, but all that really matters is each individual NHL team and what they have on their list and in their books,” Saigeon said. “It’s flattering, but at the same time, I’m not going to be satisfied.

“At the end of the year, we’re trying to win a championship and I’m trying to sign a contract. Those are the only two things on my mind right now.”

Saigeon was invited to an Edmonton Oilers development camp as a free agent last summer, a process he could only describe as positive.

“I had a great experience at Edmonton’s camp and they said they wanted to see me be consistent for a full year because I did really well in the second half of last year,” he said. “I really lit it up but the first half.

“They said they were really impressed where I was at but they want to see me have a consistent year which I think I’ve done and I’m just trying to keep it up.”

Saigeon has done that playing not only with a strong team — the Bulldogs lead the Eastern Division with a 31-11-3-2-3 mark — but with a group of talented forwards.

“It helps for sure knowing no matter who I’m playing with I’m going to have two good linemates no matter what,” he said. “Whether I’m on the first line or second line, it doesn’t really matter. We have a really deep group of forwards and that definitely helps out.”

Saigeon is counting on a long playoff run which would no doubt help his stock.

“I think that [long run) would help everybody on the team individually,” said Saigeon, who played a handful of games with the St. Catharines Falcons as a 15-year-old and didn’t look out of place. “Down the stretch, there are going to be lots of eyes and lots of scouts watching us because we’re such a good team. It’s something I haven’t had in the past playing in the OHL so it’s really exciting.”

He also loves playing in his backyard.

“I’m really enjoying playing at home. There’s always people I know at the games and really loyal fans and lots of friends and family come to watch so that’s important to me as well.”