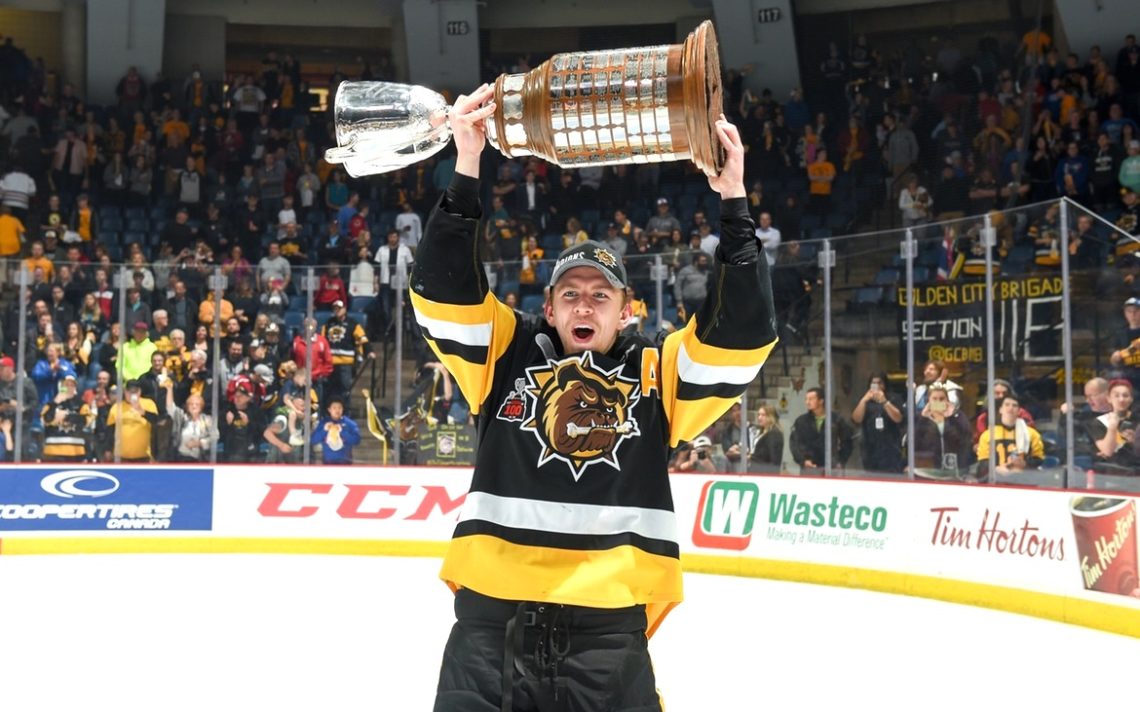 Grimsby native Brandon Saigeon, who won an OHL title with Hamilton in 2018, has joined the University of New Brunswick. Photo: OHL IMAGES.

Brandon Saigeon is putting his professional aspirations on hold.

The 22-year-old Grimsby native has committed to the defending Atlantic University Sport men’s hockey champion University of New Brunswick REDS after spending last season with the Utah Grizzlies of the ECHL.

“Obviously, COVID played a part in it and their reputation for guys signing pro contracts out of that school,” Saigeon explained. “With everything going on, it gives me a chance to get some schooling done while training and practising with the top program in Canada.”

Saigeon, who will major in business, becomes the third former Hamilton Bulldog to join the REDS in the last year, following former teammates Isaac Nurse and Kade Landry to Fredericton. Nurse and Landry were members of UNB’s recruiting class of 2020.

“The coaches are great. A lot of the players that are there I know and have said good things about it,” he said.

REDS head coach Gardiner MacDougall is happy to add Saigeon to the roster.

“Brandon demonstrated an elite performance level during his OHL career, capped by his 92-point overage season,” MacDougall said in a story posted on the school’s web site. “He has great offensive components, including his puck instincts, an excellent shot, and a relentless compete level.”

Saigeon, who was selected in the fifth round of the 2018 National Hockey League draft by the Colorado Avalanche, hasn’t given up on his dream of playing in the NHL

“It’s kind of a stepping stone. Everyone takes different routes to where they want to be and I decided this is best for me at this time,” he said. “There are a lot of what-ifs to think about. I think (COVID) was one of the reasons that put me over the edge but I still think UNB is such a great organization and program, COVID or not, I think if I put the work in I’ll be able to reach my goal.”

Saigeon also had to consider the fact the clock was ticking on his OHL academic scholarship, which players must begin to use 18 months following their graduation or forfeit.

“It was a good experience,” he said. “It gives me confidence I can play with these guys at the pro level.”

Saigeon played 304 regular season OHL games, the majority with the Hamilton Bulldogs, recording 251 points over five seasons and winning an OHL title with the Bulldogs in 2018.

Overall, Saigeon said he was pleased with his OHL career.

“There’s obviously ups and downs for every player but it’s been more positive than negative,” he said. “I can’t really complain right now. I’m in a good situation and every place I’ve played I learned something new. I had good people around me and I’m very fortunate for that.”

Saigeon recently moved to Fredericton and was required to quarantine for two weeks. He had his first practice with the team this week.

“It was good. It was a great experience. I was a little rusty but I guess that’s to be expected,” he said. “We’ll see when the season starts and trying to prepare myself as best as I can and when the time comes I’ll be ready.

With the 2020-21 Atlantic University Sport season lost to the pandemic, the REDS aren’t competing right now. They continue to train and practice.

Saigeon is slated to begin on-line classes at UNB this week. He plans to stay in a student home with three other players located close to campus.