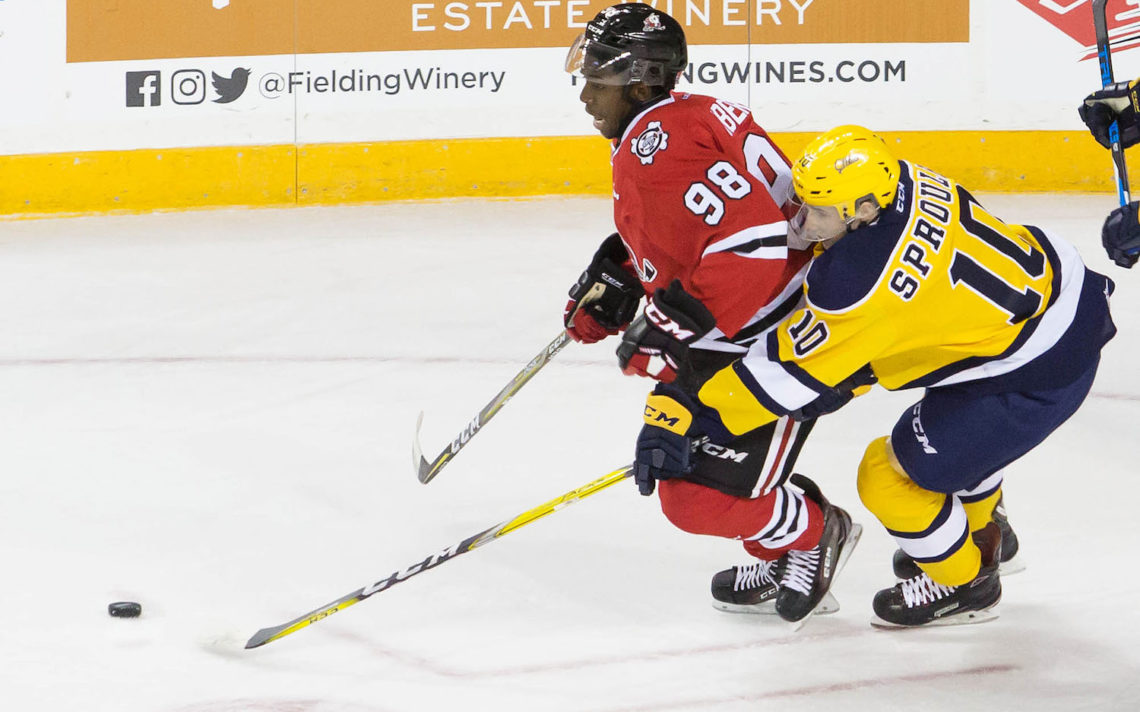 Elijah Roberts is ready to take on a new role with the Niagara IceDogs this season.

The 20-year-old rearguard is one of three overage defenceman on the roster and is prepared to be a mentor and leader to the younger members of the team.

It is a change from last season when the speedy defender was a piece of a roster filled with talented veterans.

“Last year when you look at it, we were going for a championship. We had a team of maybe 14 19-year-olds. This year we have three OAs (overage players) and after that our team is a lot younger, a lot of new guys,” Roberts said.

“We still want to be a competitive team.  For me, (it’s) to be a leader and make sure all the younger guys feel at home and help them develop their game as much as possible so this team can make a run in the future.”

Roberts, who played two years for the Kitchener Rangers before joining the IceDogs for the 2017/18 season, is well aware how important veteran leadership can be.

Roberts, Jacob Paquette and Drew Hunter are all over-age defenders and the IceDogs plan to keep two. The other OA spot will be a battle between forwards Bradey Johnson and Oliver Castleman.

“We definitely want two overage D,” IceDogs coach Bill Burke said. “We do want two of them on them on the backend to help youngsters.”

Rookies Landon Cato and Issac Enright, along with import Giancarlo Chanton, figure to get plenty of ice time on the blue-line.

“As young guys, they are going to take their lumps,” Burke said. “Young guys can feel overwhelmed back there. They’ve been able to do some many things for their whole lives and now they come here and realize it’s a very good league and some of the things I’ve done I can’t do anymore.

“It’s good if we’re running around that we have a 20-year-old who can stabilize things.”

Roberts realizes how important experience is on the backline.

“I mean, it’s hard to win games if you’re giving up four and five goals and having a couple of OA defencemen and having a stable back end will hopefully help the younger guys,” Roberts said.

The IceDogs may begin the season with all three OA defencemen on the roster if one of them isn’t moved. Teams can have more than three overages on their roster to begin the season but can only dress three for a game.

“There is no imminent trade,” Burke said. “He’s (Roberts) a guy if he’s here will be a leader and will be a big part of us.”