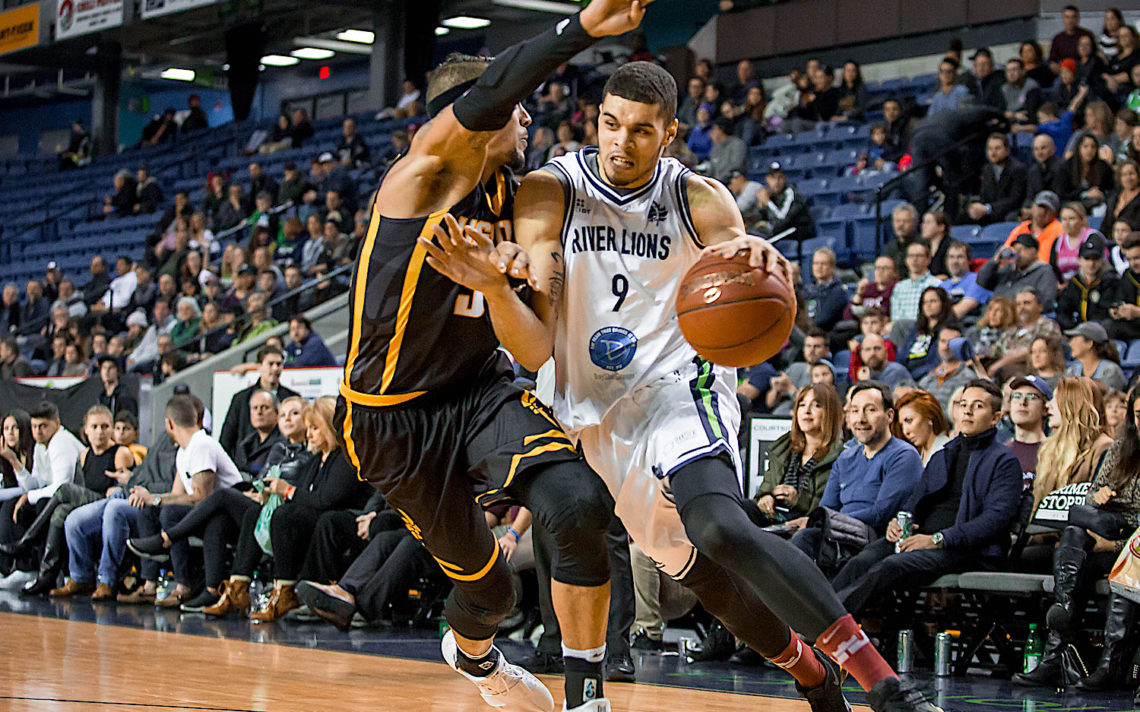 The Niagara River Lions opened their National Basketball League of Canada season Saturday at the Meridian Centre with a win over the London Lightning. PHOTO BY: COLIN DEWAR,.

The veteran coach, who led the McMaster Marauders for 18 seasons, can now add a professional victory to his legacy.

And what a memorable win it was.

The Niagara River Lions opened the National Basketball League of Canada 2017/18 season with a 120-114 victory over the defending champion London Lightning Saturday night before 2,636 fans at the Meridian Centre.

Raso, who last coached in 2012, was all predictably smiles afterward as he met with the media following a quick chat with his squad.

“That would have been a tough one to lose,” he said. “I feel real good.

“Personally, you’re always happy. You win so you can play again. I learned that as a kid.”

He also tried to downplay the individual achievement in favour of the win for the team.

After some long hours and days compiling the team and getting through training camp, Raso was thrilled to see all the hard work pay off.

“It was really satisfying,” he said. “They have a couple of games under their belt and they’ve had a long training camp so this was your test right off the bat.

“The part that most excites me is that we have lot of things to correct to get better, but this is a pretty good point to start.”

Official statistics were not available due to a problem with the system which saw the stats revert back to the start of the game each time a substitute player was added. Officials will likely be forced to watch the game at a later date and try and accumulate the numbers that way.

Regardless, Raso loved how so many contributed to the win.

“I think our depth and our parity . . .  if you said to me right off the bat who led us in scoring I’d have a hard time figuring out who it was,” he said. “We were playing through some guys and we tried to play through some hot hands. I expect the strength of this team is we will be seven or eight deep by the end of the season.”

Raso said that philosophy came up he was compiling the team.

“That’s a big issue when it comes to pro basketball in the minor leagues. Everybody is into numbers. When I signed these guys and recruited these guys I told them I was all about wins. If you trust the wins, then the stats will come. I think we’re there.”

“When you go and play the best team in the league and compete with them — I thought it the first quarter they kind of pushed us around — but after that I thought we did a pretty good job,” he said.

The Lightning made several runs in the fourth quarter and got to within one at 115-114 with just under a minute to play.

Omar Strong then drained a key three-pointer from the corner with 17.8 seconds remaining to put the game out of reach.

“Omar Strong is a very good basketball player. The ball wasn’t going in for him but I have all the confidence in the world he can make a big shot,” Raso said.

“I don’t think anybody surprised me. I like what we have. I think Jaylon Tate, for his first game as pro, everyday he puts a smile on your face. I think he may surprise some other people. I was thrilled for him.”

The River Lions are now off until Sunday, Nov. 26 at 2 p.m. when they host former MVP Logan Stutz and the Windsor Express

Lion’s den: Former River Lion Richard Amardi, now a member of Raptors 905, was in attendance . . . London’s Marcus Capers was forced to leave the game in the third quarter with what appeared to be a bloody nose. He returned later  . . . London’s Ryan Anderson fouled out with four minutes to play  . . . Niagara’s Sam Muldrow was gone with 1:41 to play and Marvell Waithe with eight seconds to play . . . Niagara were called for 34 fouls, London 29.