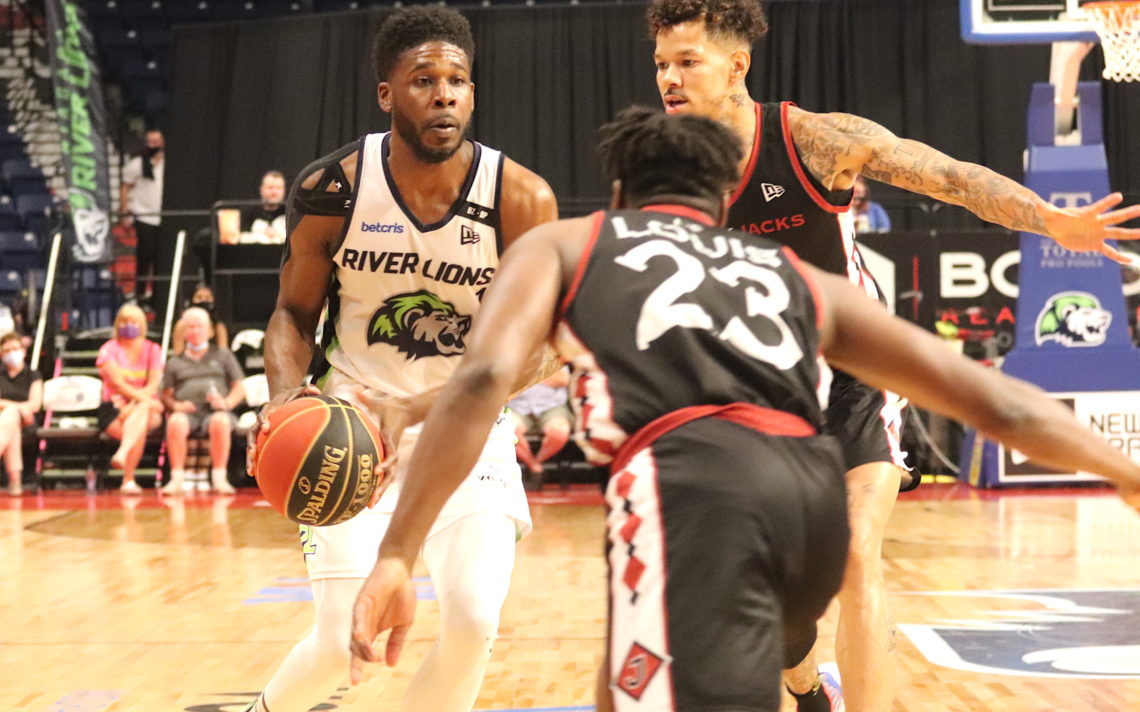 The Niagara River Lions saw their Canadian Elite Basketball League season come to an end Sunday with a 101-65 loss to the defending champion Edmonton Stingers in the championship game at Edmonton’s Expo Centre.

“We dealt with a lot of adversity and this was kind of a mountain we couldn’t climb,” said Victor Raso, Niagara’s head coach and general manager. “We ran into a real good basketball team playing their absolute best in front of a home crowd. We just couldn’t overcome that today and I can live with that.”

Niagara came into the championship weekend with the cards stacked against it. The team hadn’t practised or played together since Aug. 8 when a positive COVID-19 test by one of the participants in a game versus Niagara and the Ottawa BlackJacks sent the River Lions into COVID protocols.

Niagara was able to get back Javin Delaurier and Tyree White from NBA Summer League stints but they also were missing Guillaume Payen-Boucard (went to join a pro team in France) and Xavier Sneed (signed a contract with the Charlotte Hornets). Thomas Scrubb missed the semifinal game.

“I am so proud of them for what we dealt with this whole season and to get ourselves here and give ourselves a shot,” Raso said.

The team was bolstered by the return of Thomas Scrubb for the final but in the end it wasn’t enough.

“That was incredible for our organization that a player of any stature, but Tommy specifically who enjoyed his time with us and felt connected with us enough in his two weeks of being here that he would do something like this,” Raso said. “To fly out here at six in the morning, four hours across the country and fly back at 6 p.m. just to play in a basketball game because he wanted to be a part of it is a big testament to our organization. I am very grateful for Tommy doing that.”

Niagara’s game plan was to shut down three-time league MVP Xavier Moon and it was able to do that until the game was out of reach. The problem was that Moon’s teammates stepped up and the Stingers didn’t miss a beat.

“Our plan was to make life hard for him and his teammates hit a lot of shots. By the time Xavier really started to get aggressive offensively, they were up by 15-20 points and it was a little demoralizing for us,” Raso said.

The Stingers grabbed a 22-12 first-quarter lead thanks to an 8-0 run to finish the quarter. Tommy and Phil Scrubb each had five points in the quarter as Niagara went 4-15 from the floor.

Edmonton used a 10-1 to push its lead to 36-16 in the second quarter. Sparked by consecutive baskets by Daniel Mullings, Niagara stopped the bleeding and was able to head into halftime down 42-29. Niagara struggled shooting in the first half, going 27 per cent overall and 14 per cent from three-point range. In contrast, Edmonton was 50 per cent from the floor.

Edmonton continued to roll in the third quarter and rode some hot shooting to a 70-47 advantage heading into the final quarter. The Stingers closed the quarter with a 6-0 run.

Edmonton opened the fourth quarter with an 11-0 run in the first 2:15 and the game was effectively over.

The River Lions earned a semifinal bye by finishing second in regular season action with a 10-4 record and then advanced to the final with a dramatic 84-82 victory over the Fraser Valley Bandits. The championship game setback does not detract from a great season put forth by the River Lions.

“It was a really successful season and the thing that we can hang our hat on is that we didn’t plan on having three different teams and that was something that was thrown our way,” Raso said. “We handled it all in stride and we got  ourselves to the finals in a season we didn’t envision with a roster we didn’t envision looking this way at the end. That is something that Antwi (assistant GM Atuahene) and I can be really proud of.”

The three different teams referred to by Raso were all the additions and subtractions from the squad as the season went along.

“It was awesome that the guys liked each other enough that there was never any complaining and there was no problem with guys coming and going,” he said. “It was always ‘Oh you are going to NBA summer league. Good for you. You are going overseas. Good for you. You are able to come back now. Perfect.’ They were welcomed with open arms. That is something we can be really proud of.”

Raso will take a few days to decompress and then it is back to work.

“The big thing for us is guys are going on to other things and we will support them,” he said. “Antwi and I will probably take a little bit of time but we will start working and getting back to our weekly grind, making sure that next year we will be better than this year.”

BPSN Player of the Game: Edmonton’s Xavier Moon with 28 points.