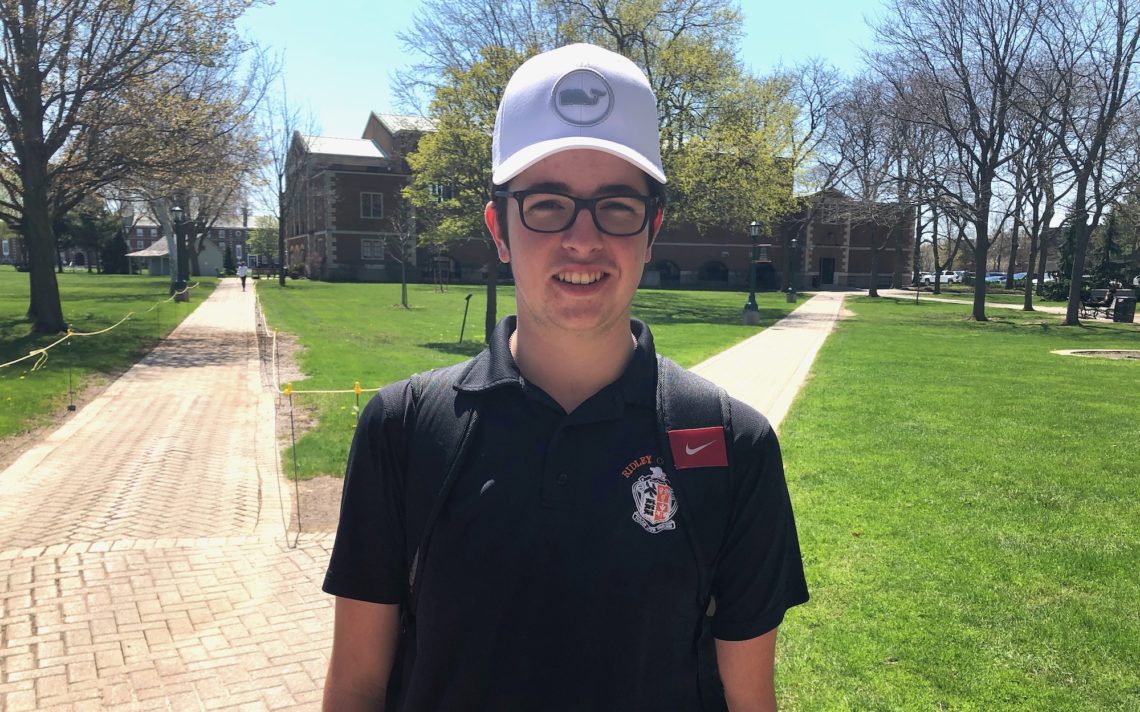 Bradyn Wark’s philosophy was to keep it simple when battling the elements at a CISSA (Canadian Independent Schools Athletic Association) golf tournament at Deer Creek Golf Club in Ajax.

The 15-year-old, Grade 10 student fired a 74 for the low score of the day despite less than favourable conditions which saw the golfers endure freezing cold temperatures and strong winds.

“It was windy and cold and raining,” Wark said. “I just played smart. I didn’t go after pins I didn’t have to and I didn’t lay up a lot.

“I just played my game in those conditions.”

“A score of two-over par is incredible on any day, but considering the wind and temperature, I am more impressed,” said Bowie, who co-coaches with Pete Doyle.

Wark had an inkling he had a chance to win the overall title.

Wark, the son of Ridley Prep Girls hockey coach Amanda Benoit-Wark, has been golfing for about a decade.

“I’ve been playing around here on the junior tour. I’ve won a couple of times,” he said.

Wark now has bigger things on his plate.

He has qualified for a Junior Masters Tournament in East Aurora, N.Y. and then it’s on to the U.S. Kids World Junior Championships at Pinehurst, North Carolina. Wark won a tournament at Legends in a playoff on the fourth hole to qualify.

The schedule consists of a parent/child tournaments, skills challenge, three rounds of championship play, and the closing ceremony. Following the three-day championship, the Teen Van Horn Cup — a one-day best ball tournament featuring the top players from the United States squaring off against the top players from the rest of the world — is contested on Pinehurst No. 2.

Wark, who was born in Welland, has high aspirations for his future on the links.

“Hopefully like to play in college and if college goes well then work my way through the qualifying tours to the PGA,” he said.

Ridley’s other junior golfer, Cameron Kiemele, fired an 81, which was good for 13th place overall. This was with two triple-bogies and a double.

“All in all, a great day on the course for all golfers,” Bowie said.

In the first game, Ridley struck first with Hallie McClelland finishing off a strong offensive push with a try. With no posts on the field, no conversion attempt was possible. Appleby soon answered when the Ridley wingers kept pinching in on attackers, leaving the wing area exposed, and Appleby managed to pass the ball out wide and their wing burst down the sideline for an easy score. In the last two minutes, Avery Penner powered her way over the goal line for her first marker of the day. With time winding down, Appleby desperately swung the ball out wide, and their wing again raced the length of the field to score the equalizer. Ridley was the stronger team on the field, but crucial missteps at inopportune times resulted in the tie.

In the second game, Ridley faced Bishop Strachan School, another CAIS attendee that they had not yet directly encountered. Facing a less daunting lineup, Ridley made full substitutions and made sure every team member enjoyed some game time, in addition to which players enjoyed the opportunity to try different positions than those which they were used to. The team missed a few crucial one-on-one tackles, allowing BSS to score three tries, but Ridley managed the game well and scored four times, with two markers each from Brooke Loranger and Katherine Culligan, to seal a 20-15 victory.

In the final match of the day, Ridley again faced Trinity College School, whom they had just faced at the CAIS tournament. As the two most physical teams in the league, the Ridley-TCS matches are always tough affairs, and this game proved no different. Ridley brought the pressure first resulting in Penner streaking over the line for the first points of the game. TCS battled right back, and a number of inopportune penalties placed them right on the Ridley goal line, where the team capitalized. A minute later another defensive breakdown allowed TCS to take the lead on a second try, despite the scoring player fumbling the ball in the end zone. Ridley battled back, looking to even the score. Then, similar to the CAIS match, Ridley were again issued a yellow card, for what was officially interpreted as high tackling. Down a player, TCS battled hard for extra points, and Ridley went into full defensive mode. Ridley’s six defenders managed to hold off the seven attackers, conceding no points, and once the penalty was over Ridley, transitioned into offensive mode to try to even the score. With two minutes left in play, Penner again broke through, and dove across the goal line for her second of the game.

“The girls were up 10-5 in the Appleby game with 45 seconds left. Ridley coughed up the ball after gaining possession, and the Appleby winger ran the length of the field to tie up the game,” coach Charl van Niekerk said. “Valuable lessons were learnt. In Game 3 vs. TCS, Ridley were yellow carded and forced to play six against seven for four minutes, so tying the game up at the end after being down was a tremendous display of character and grit.”

The 7’s girls face their next game action Wednesday with another full round of games.

The girls soccer team dropped a 2-0 decision at De la Salle School in Toronto to fall to 0-3.

“We did not score, but tried,” coach Gerardo Martinez said. “The team is working hard to improve. We were unlucky.”

“It takes courage to win 50/50s, not skill, and we showed that in most of our games and other times, we were unlucky,” coach Paul O’Rourke said.

Ridley’s boys and girls rowing teams had a strong showing at the Early Bird Regatta on Martindale Pond. 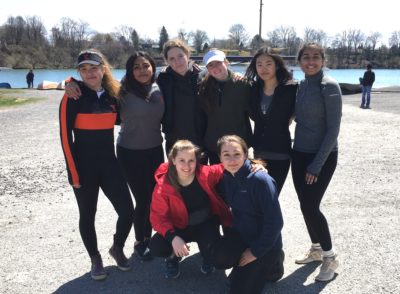 “The rowers went into the regatta prepared for racing, and gained valuable experience in challenging conditions. They now have two weeks to work on their targeted focuses before our next competition.  It was a solid start to our season and I’m encouraged by their commitment to technical change and training,” coach Siobhan McLaughlin said.

The senior girls will test their speed against the fastest juniors in Canada at the first round of junior national team trials May 11 in St. Catharines, hosted by Rowing Canada. On May 12, all crews will compete in the Mother’s Day Regatta. 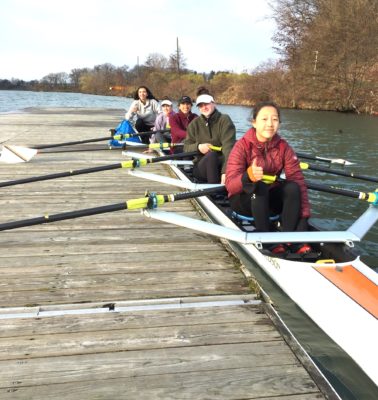 The junior girls 59 kg quad started the 2019 rowing season with a third-place finish in the first race of the day.  The junior quad followed shortly after cruising to a win in their event. The rest of the junior/development team experienced their first 2000-metre rowing race in a number of different events and they all came off the water satisfied with their performance. The junior double was swamped by rough water while waiting in the starting gates and were unable to safely race and pulled off the water.

The dance team, representing Ridley for the first time since 2008, competed at the KARV Dance Challenge, Orillia Opera House.

Following are the results:

A special award for choreography was received for the lyrical group.

Riley Stock’s acro solo received a gold and a first.

Following are results from Dance Canada at the Americana Resort in Niagara Falls.

“Super proud of the entire team and all the hard work they put in throughout this entire year,” coach Tatum Johnstone said. “All the long hours and morning practices really payed off.

“They had a great time competing for the first time and I can wait for next season to give even more and push the students to their full potential.”