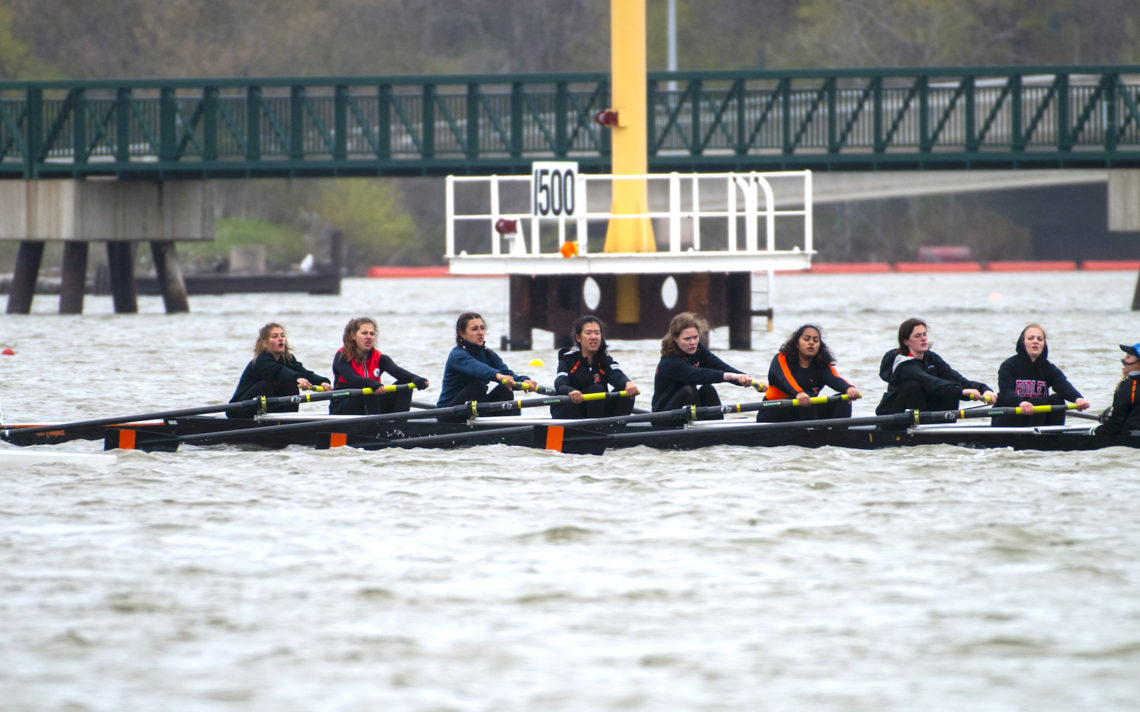 Rowing is growing at Ridley College.

A total of 60 rowers are participating at the school this year, about double the amount from only five years ago.

“We have more coaches helping bring more kids into the sport at the school,” boys and junior coach Dereck Schwandt said. “The development side of things is huge and trying to draw more kids into it.”

“There have certainly been ups and downs over the years with numbers but we’re definitely coming up,” she said. “It’s not all about numbers but you need that critical mass to do a selection to get the really fast crews.”

Those numbers are turning into success on the water. 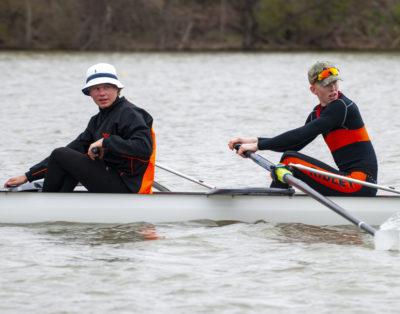 Of the 26 events Ridley entered at the Mother’s Day Regatta Sunday on Martindale Pond on Henley Island, 18 crews rowed in the finals and nine earned gold, one silver and three bronze for 13 medals in those 18 races.

Ridley’s junior/development girls contributed to that total with a gold, silver and bronze.

The junior quad of Vanessa Russell, Claire Sun, Ella McRae and Ipek Derinkok took home gold while McRae and Derinkok teamed up to earn silver in the junior double. Russell, Sun, Chloe Cook and Olivia Grubic were awarded a bronze in the junior 59-kilogram quad.

“Just as exciting was to watch our novice sweep rowers, the junior four, having rowed together twice, passed two boats in their heat,”  McLaughlin said. “Our senior eight battled side-by-side with another crew in not only their heat but also in their final and both times pulled away for a strong finish, ending the regatta with a fourth-place finish.

“We are excited to see where the girls can go from here.”

Placing third in the senior women’s 63-kilogram double were Gabrielle Cook and Drennan.

“The athletes did a really solid job in applying what they have been working on in practices to their racing, and identifying what they can improve on from heat to final, and executing it in their next race,” McLaughlin added. “We have learned from these races and will work to improve our speed heading into Stotesbury this week, which is the largest high school regatta in the U.S.”

Schwandt was thrilled with the showing.

“It was pretty cool. Five years ago I think we had five medals. Everyone rowed really well,” he said.  “It surprised us a little because it was the first time we got to see any competition so you know if all the kids are doing the right things you can set yourself up to compete, but you don’t know until you actually race.”

Grade 10 student Cameron Kiemele led the way with an outstanding score of 71. This put him in second place overall against a very deep field. Kiemele had an excellent ball-striking round, hitting almost all fairways and greens. However, he failed to convert on some key putts and just came up short of Ridley going back-to-back for low individual score.

The senior team was shorthanded this week. The low score of the group was by Carter Giles with a 92.

“Very excited for the future of this program,” golf coach Pete Doyle said. “We have excellent golfers coming up in our system that are showing that they are not afraid of the moment. “Every week we have players in contention. I am very excited to see what heights this program can reach with the core of athletes that we have coming up.”

In their first game, Ridley faced off against Hillfield Strathallan College, whom they had last met victoriously in the Canadian Accredited Independent Schools (CAIS) National Rugby Tournament semifinal.

Ridley struck first with Avery Penner finishing off a nice drive. Ridley then made a few small mistakes, which led to costly outcomes. On a regular play, Ridley knocked the ball on, which would typically result in a scrum, but the referee may allow an advantage period, where if the opposing team can capitalize on the mistake, then play continues. Ridley simply stopped playing after the error, allowing Hillfield to seize the ball unopposed, swing it out wide to their wingers, who skipped in for a score.

In the second half Ridley again had a wing player cut in on an infield Hillfield attacker, leaving the wing area exposed, and Hillfield swung the ball out wide where the cross-cover defence had too far to move across the field to make a tackle, and Hillfield scored a second try.

Ridley battled back, but ran out of time before being able to successfully equalize and dropped a 10-5 decision. 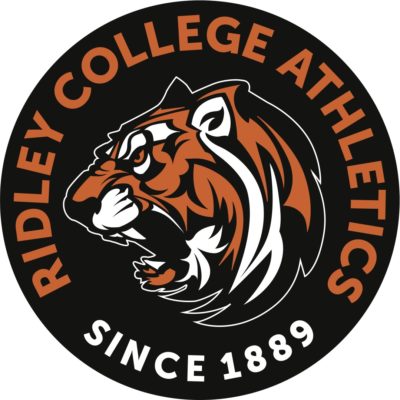 In Game 2, Ridley squared off against a feisty Bishop Strachan School squad, who pushed hard and applied pressure early, capitalizing on Ridley forced errors to score a penalty try, where the conversion kick is automatically awarded.

Helene Ohneseit next ran beautifully in support to catch an offload pass at pace, and she crashed past the last defender to score. BSS came right back, and their wing player broke a number of weak Ridley tackle attempts to score their second of the contest. BSS led 12-5 at the half.

In the second half, Ridley pushed deep into BSS territory early, and, following a multi-phase ruck set, Mikayla Itemuagbor attacked hard and powered over for a score of her own, even trying to carry the ball to centre to make the kick attempt easier. The conversion kick was missed, however, and Ridley still trailed, 12-10. With time running down fast, Ridley pulled together for one big, last, offensive push, and their teamwork won the day, with Hallie McClelland finishing off a great drive with a diving try in the BSS goal corner to give the Tigers the win.

The last game of the day was against Country Day School, where Ridley dominated the early game, and Brooke Loranger, playing at scrumhalf, capitalized on a couple of quick break opportunities to score two quick markers of her own. Ava Robertson converted one of the kicks, and Ridley led 12-0. CDS battled right back, however, and after some multi-phase play of their own, the backline swung the ball out wide and the CDS winger ran half the field to score under the posts. The kick was missed, and Ridley’s lead was down to a single score, 12-5. The game see-sawed back and forth for the remainder, until the final minute of the second half, where Ridley put together a string of beautiful off-load passes, putting the CDS defenders under mounting pressure, and Hallie McClelland powered over the line for an insurance score to win 17-5.

Saturday at Hillfield, Ridley squared off against the three other top teams in the league – Hillfield Strathallan College, Appleby College, Trinity College School.

Only the first game of the day would count towards league standing, and the Tigers faced off the HSC Trojans, whom they had beaten in the CAIS semifinal match, but had lost to in league play the previous week.

The focus for the Tigers during practices the past week had been to better develop their ability for off-load passing in contact, in order to allow their offence to transition into next-phase attacking more quickly, as well as minimize the opportunity for the Trojans to counter-ruck.

Ridley executed perfectly, and completely dominated play in all aspects en route to a 10-5 win.

Right from the opening kick Ridley proved relentless on attack, driving ever deeper and deeper into Trojan territory, and waves of Tiger attackers moved inexorably towards the Trojan goal line. The pressure proved overwhelming, and Hallie McClelland powered through for the first score of the day. Ridley maintained the pressure right from the next kick, and their tenacious defence forced Hillfield to turn the ball over. The Ridley offence kicked into action again, and the team threatened to score on a number of occasions, with probing attacks by Avery Penner, Jordyn MacIsaac, Ava Robertson, and Katherine Culligan. In the dying minutes of the first half, Mikayla Itemuagbor evaded a number of defenders and scored a marker of her own. In the second half, Hillfield pushed hard to try to force a comeback, and Ridley enjoyed the opportunity to practice their defence. The Trojans came closest when their wing rounded the corner on the Ridley backs and raced down the sideline with the goal-area wide open, but a streaking Katherine Culligan again came flying across in cover-defence and made a desperate diving tackle, bringing the Hillfield player down. The Trojans recovered, and Ridley made an incredible goal-line stand for the next three minutes, making tackle after tackle, stifling and frustrating the high-powered Hillfield offence. Brooke Loranger led the charge, with a number of bone-crunching tackles. With time winding down, a Hillfield player finally crossed the goal line, but appeared held up in the play.

In the second game of the day, Ridley faced off against Appleby College. Appleby came out firing, scoring twice in the first half, and took a 10-0 lead into halftime. Some of the Tigers looked dejected, but this proved an excellent learning opportunity, as the players forgot the score, and simply focused on sticking to the Ridley game-plan. Teamwork and strength of character won the day, as Ridley scored four unanswered tries in the second half (Jordyn MacIsaac, Maya Sirhan, Mikayla Itemuagbor, Brooke Loranger) to win 20-10.

In the final exhibition game of the day, Ridley squared off against the Trinity College School Bears. Trinity took an early lead in the game, and never looked back, finishing with a 20-5 win.

Ridley has one last day of league play left this Wednesday before they will be gearing up for the post-season following the week after the Victoria Day weekend break.

The Girls First Soccer Team closed out their season managing a 1-1 tie with Crestwood Collegiate.

The Tigers led for most of the game with a marker scored in the first half by Sara Monica Mbega Botoho after some nifty ball maneuvering in the corner by Kalyna Kit. The Tigers held strong for most of the second half but were scored on midway through the last half.

Kudos for strong defensive play by both Hannah McMaster and Riley McMaster.

Ronan Cordeaux and Afam Akaraiwe scored for the Tigers.

“It was a strong performance against a quality soccer academy team. Alex Vera in midfield had a strong outing in a box-to-box performance,” coach Paul O’Rourke said.

The Tigers then topped the East York Predators 3-1 to improve to 7-3-2.

“Hosting a showcase tournament allowed us to bring a number of quality players to campus and to field a full squad. It was nice to see Desir notch his first goal for the Ridley First Soccer team,” O’Rourke said.