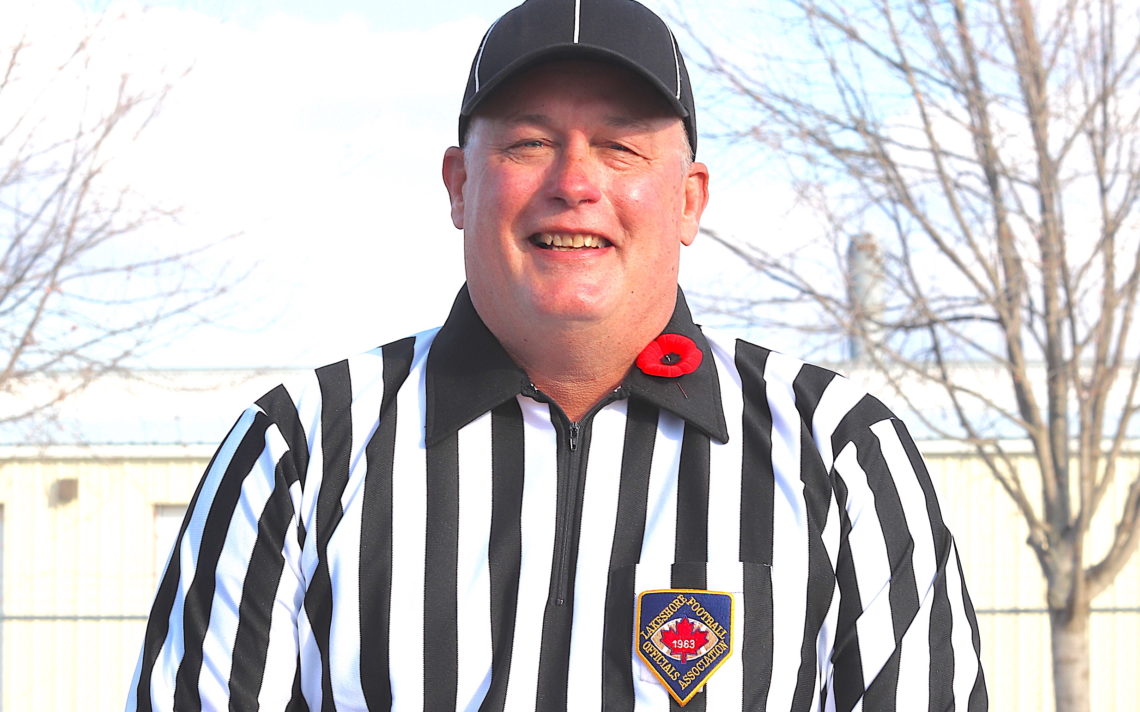 Reffing to the Max

For the past 20 years, Dave (Max) Maxwell has officiated upwards of 50 football games a year.

“I love it, I just love it and I wish I would have started way earlier instead of playing touch football and ruining my knees,” the 60-year-old Merritton native said. “I have never done this job for the money and it is pretty important that we are out there. If I didn’t get paid, I would still do it.”

And while football fans are known to shout ‘There are two teams out there ref’, the retired General Motors millwright begs to differ. There’s really three.

“I like the camaraderie we have in our crews which makes it seem like you are on another team.”

Maxwell has been involved with football since he was 13 and playing on the Thorold Reds.

“I have never been a star athlete unlike my oldest son, who was always one of the best,” he said. “I was just a guy on the team and part of the building blocks and that’s why I like being on the field.”

For Maxwell, getting yelled at is just part of being an official.

“Adversity is something I thrive on and I don’t have a problem with people yelling at me,” he said. “You hear people screaming at you but if I come off the field after a game, the best thing I can get is having people from both teams, win or lose, thanking me and saying I did a good job. I don’t need any thanks other than that.”

Maxwell is willing to take criticism if he doesn’t have his best game, so long as it is constructive.

“Jake Ireland (former CFL ref) told us once that he is still looking for his first perfect game and he is in the hall of fame,” he said. “With Lakeshore (Lakeshore Football Officials Association), we have had some really good mentors who have helped us out. No one always has their best game but most of the time when people are screaming at you they really don’t have a clue what they are yelling about.”

Most fans are in tune with the NFL or college football in the States and they base their knowledge of the rules on those two versions.

“Probably 85 to 90 per cent of it is the same but in Canada we have different rules too,” he said. “I have been doing this for 20 years and I have heard pretty much everything that people have to say.”

Maxwell doesn’t have a problem with coaches yelling at him.

“I have coached and I know how much time these coaches have put in with their teams. I let them have their say and then I will tell them that that’s enough. Most of them that know me know that they are done. I have heard what they have to say and we’re good.”

In his entire career, he has thrown one coach out of a game.

Maxwell has officiated four provincial championship games at the travel level and many important high schools games, but officiating on the big stage isn’t the source of his fondest memory.

That came when he was reffing a minor football game.

“The coach was yelling at his kids that they had to hold the line and this little guy turns around. He is in his three-point stance and his helmet is half off and he is talking through his ear hole and he said, ‘Coach, I thought you told us we can’t hold?’

“That is one of my favourite memories and that’s why I like to do minor for kids at that level. They don’t have a clue and half the time they are hugging you”

Like officials of all sports, Maxwell has seen his passion put on hold by the COVID-19 pandemic.

“My wife told me that she doesn’t like having me around all the time,” he said, with a laugh. “I usually do this from the middle of April until the beginning of December.”

Maxwell, who has recruited more than 20 guys to join the LFOA, got his start as an official when he answered a notice for officials in the newspaper. He started in 1999, which was the same year that the Niagara Regional Minor Football Association was launched.

In addition to reffing, Maxwell has also coached. He helped his brother, Scott Maxwell, when Scott was running the Saint Michael junior football squad.