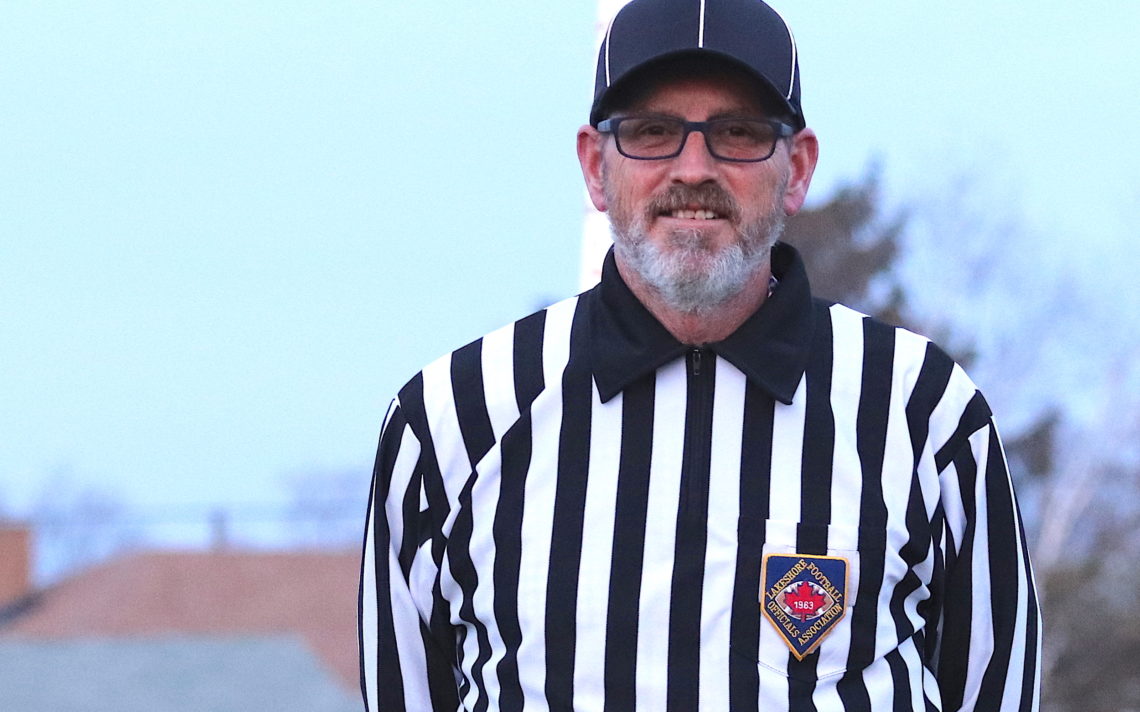 There’s a lot of things Darren Cochrane misses about football during the COVID-19 pandemic.

The 54-year-old football official yearns for the sound of a big hit on the field, the camaraderie between himself and local high school and travel coaches, the friendships between fellow officials and the road trips to Ontario University Athletics games from Ottawa to Windsor. But most of all, he longs for the impromptu coaching clinics at his home in Welland. The Niagara Falls native sends out emails in March letting other officials about the sessions that run from March until November or December.

“We go downstairs, I put it up on my TV and we start from Page 1 of the rule book and we go to the end,” he said. “When some coaches say that we don’t know the rules, there are a lot of guys who come to my house and we do know the rules.”

The sessions are usually on Monday or Tuesday and of the 33 or so Niagara refs who are part of the Lakeshore Football Officials Association, eight to 12 show up weekly to sharpen their knowledge of the rules.

“It’s the guys who want to learn and we miss it a lot,” he said. “As COVID moved along, I was doing Zoom sessions with a lot of the guys just to keep it going. Then COVID settled down in the summer and I had a few guys over to the house.”

Knowing the rules is obviously the most important part of being a ref.

“It’s knowing the game and I study the rule book hard,” he said.

But that doesn’t mean Cochrane or other refs don’t make mistakes on occasion.

“I will be the first one as an official to tell a coach that I screwed up. Or I will tell them that we don’t get a certain call every day and I am doing what I think it right, but that rulebook is pretty thick to try and remember every single rule.”

Jake Ireland, a LFOA member and CFL hall of fame ref, has always told his fellow refs to build credibility.

“Credibility with coaches goes a long way and if you tell a coach you screwed up, you bank it,” Cochrane said.

He sometimes will go back to a coach weeks after a game to explain a ruling he made, whether he got it right or wrong, and if he got it wrong that it won’t happen the next time.

“Part of my officiating philosophy is to try and be invisible,” he said. “It’s hopefully doing a game where no one even knows the officials were there.”

To make that happen requires a lot of effort.

“We are there an hour before the game going through the rules before we even get on the field,” he said. “Then we usually do a post game and go around the table. A two-hour game turns into a four- or five-hour game but we don’t compensated for that. It’s because we love the game.”

And those big collisions that make him smile.

“I love the excitement of it. When you are in the middle of it and you hear a good, clean hit, there is nothing like that sound. That is what it’s about.”

A lot of refs could do without the complaining from fans, but Cochrane is immune to their yelling.

“Believe it or not, for me, I can tune them all out. When I am the referee and I am in the middle of the field, it’s like I don’t even hear them. It doesn’t matter how many people are there, I am just tuned to the game.

“I hear the coaches but I don’t hear the fans. I am not one to listen to the fans because half of them don’t know what they are talking about.”

The one time Cochrane responded to a fan, he was reprimanded after she wrote a letter to the LFOA complaining about him.

“All I think I said was, ‘Ma’am relax’ and I got in trouble. From that moment onward, I don’t even talk to them. Let them have their say and they can say whatever they want.”

He also lets the coaches have their say within reason.

“They might see us come out and go ‘O my god,’ but while they saying that, they know they are going to get a good game. But they know we are not going to take their crap. It is what it is and if they get carried away, we are going to let them know it.”

Cochrane, who played soccer, basketball, volleyball and junior football at A.N. Myer growing up, started officiating through the encouragement of his mentor, Bill Szigeti.

“Billy and I worked at a plant together and we were shooting the shit one day. He told me I should become an official. I love football and it struck me that that would be a great idea.”

He started around 2007, and the supervisor in Regional Niagara’s long term care homes officiates everything from atom games to OUA play.

“I always loved Super Sundays in minor football. I remember doing the championship games for the 10-, 11- and 12-year-olds and the game was going back and forth, back and forth and it was down to the last seconds,” he said. “People think the OUA would be the highlight because it is a much higher level but those little kids put on just as good a show as the big kids.”

Cochrane is quick to encourage everyone to become a football ref.

“If you love the game and you played the game, give back.”

It is also a good way to stay fit.

“A lot of people don’t think we do a lot of running, but it gets you up and it gets you active,” he said. “I am doing a lot of walking and I get on the treadmill now, but it’s not the same. I am not doing the swimsuit addition any time soon.”

For more information on becoming a football ref, contact lfao-recruiter@hotmail.com