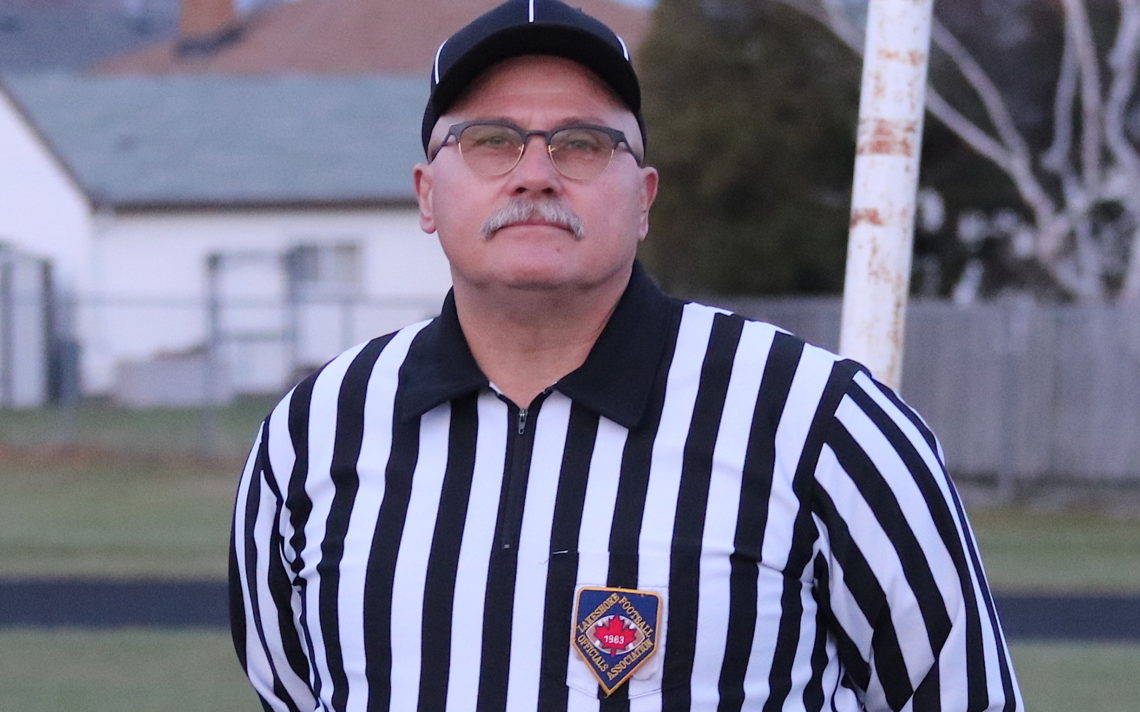 For the past 22 seasons, football ref Bill Szigeti has been a constant, officiating games in Niagara and across Ontario at the minor, high school, varsity, university and men’s levels.

“I just love football,” said the 58-year-old, who was born in Newmarket and raised in Wainfleet. “I love the camaraderie with all the guys. We are facilitators and we make sure that the games are played fairly and that’s what the job is all about.”

It’s also about being an educator.

“They (fans) see us talking to kids but they don’t hear what we are saying,” he said. “Some kids complain that the ref yelled at them but 90 per cent of the time we’re telling little Johnny that if he does it a certain way, it won’t be a penalty. We try to help them.

“I’m out there to make sure the kids get to play the game, learn and play fair.”

His philosophy is to make the correct call, no matter what.

“I don’t care how bad I am going to look and I don’t care if I am the head ref. I will try and impose my will on somebody if they have screwed up. I will try to talk, coerce, whatever to sway them into agreeing that they made a mistake.”

Coaches and players give up a ton of their time to football and deserve to have the game called properly.

“We are the only ones getting paid and if you make a mistake, get it right,” he said.

If he is unsure about a ruling on a rare call, he will tell the coach that he is making the call to the best of his knowledge.

“If I was incorrect, I will come back and tell the coach.”

Szigeti feels officiating is all about integrity and credibility.

“If you aren’t responsible and you throw those by the wayside, no one is  going to respect you and no one is going to value what you do on the field.”

Consistency is also key to being a good football ref and Szigeti uses a baseball example to illustrate its importance.

“If your strike zone is all over the map, players don’t want to come up to bat. It doesn’t matter if a pitch is two inches outside and you are calling that a strike, you have to do that every single time.”

That same principle holds in a football player’s mind.

“I know that’s a hold, he told me that is a hold and he is going to call that a hold every time that it matters.”

Like all veteran football refs, Szigeti has become immune to yelling from coaches and fans.

“You hear it but it’s only bad when you are new, especially if you are out there trying to learn and trying to get better and improve. It distracts from your focus.”

Some new officials are discouraged from continuing in the sport if the criticism is too much.

“I did one championship game where a guy blew a call and that was it, he never came back. It’s a shame because we are getting paid but we are not getting paid. We are not out there to be a punching bag for anyone.”

For refs that persevere, the sport can be rewarding.

“If you have the desire, you have some athletic ability and you are willing to put in the work, as a young guy you could end up doing CFL football. Compared to MLB or the NHL, I don’t think there’s as many roadblocks.”

Szigeti loves being in the middle of it all.

“The best seat in the house is on the field playing and cracking heads. The second best is the officials. It is amazing when you are on the field and you get to see these guys.”

The sport has allowed him to travel from Nova Scotia to Calgary, from Windsor to Ottawa and from Niagara to North Bay.

“I have seen a lot of the country and you can get to do the second best level of football in Canada which is the CIS (USPORTS). If you put the effort in and you have the abilities, you can do a Vanier Cup. If you are good enough to do a Vanier, they will be looking at you to do a CFL game.”

To get to the top level of officiating, refs need to be able to take their lumps.

“You have to be willing to take constructive criticism and if you want to get better, you are your own worse critic. And you have to be. Before the evaluator comes to talk to you, you already know what he is coming to talk to you about.”

Self-evaluation is crucial as is listening to what other officials have to say during games and at post-game debriefings.

“When we get in dressing room after game, we will ask each other what they saw on a particular play,” he said. “Angles are so important and what one guy sees, another guy sees differently. You have to be willing to take on-field evaluation because that’s what your crew buddies do. They help you pick up a flag because it’s about getting it right.”

Like many of his colleagues, Szigeti gets a special kick out of officiating minor football.

“I like doing the minor football because it is a Sunday walk in the park. It’s the little kids and it’s just fun. I call it buckets and shoes.”

“They’re little kids, then you see them playing their third year and the next thing you know they are in high school,” he said. “I have seen four high school rounds of kids come and go.”

“I was a little chunky in Grade 9 but I played every year after that and I started in senior as a Grade 11 player.”

After graduating, he thought about coaching but his factory job didn’t allow him the time to do so. He ended up umpiring slo-pitch and fastball for 13 years until a conversation with coworker Tim Strong, who was reffing football at the time.

“I told him I wanted in and in 1998, I went for my Level 1,” the Regional Niagara water maintenance worker said. “I ended up doing three games that year because there was a teachers strike. But I got my feet wet and from there it grew and I put more effort into it.”