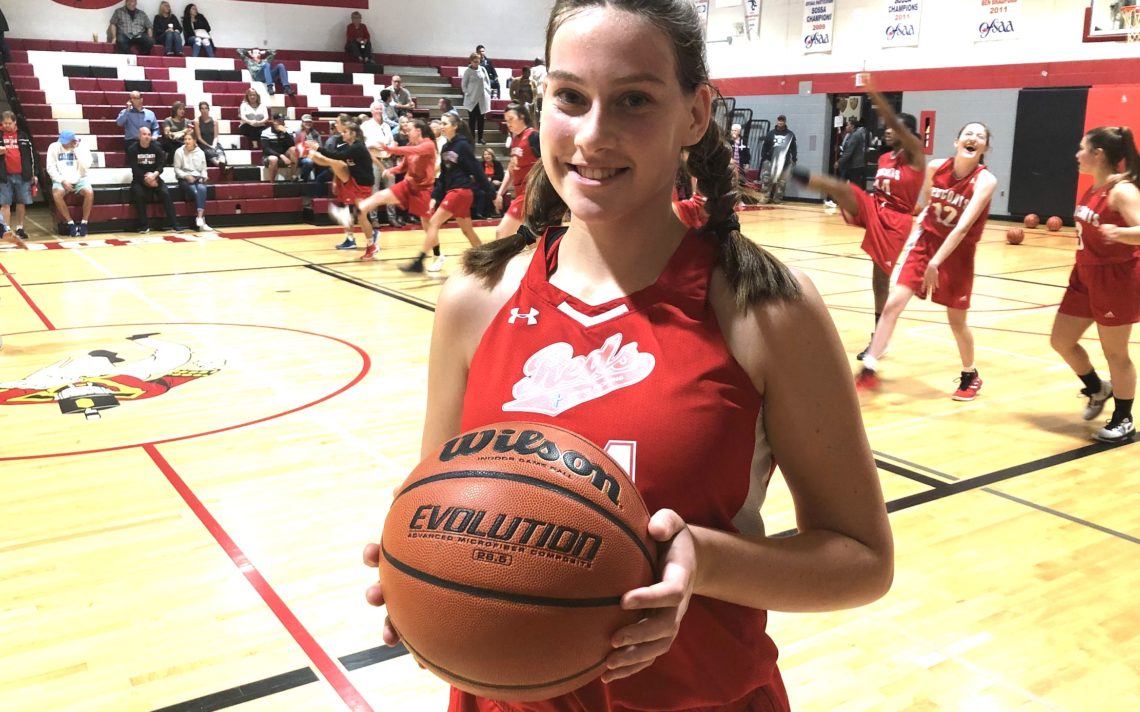 Jordyn Britton has developed into an important piece of the puzzle for the Denis Morris Reds on a couple of levels.

The 17-year-old, Grade 12 student is not only is the Reds top rebounder, but also contributes offensively from her post position.

Britton poured in 15 points Wednesday to lead the Reds past the Jean Vanier Lynx 56-48 in a championship quarter-final game at The First BPSN Girls Basketball Tournament at Governor Simcoe.

“Jordyn had a phenomenal game,” DiMizio said. “She means a lot. She’s a silent leader and leads by example and by scoring points down low, but she’s always the first or second girl down on the fast break. She’s always fighting and always on the floor getting those (loose) balls.”

“It’s great to have some height. She is one of the taller girls in any of the games we’ve played and we use that to our advantage.”

The Reds built a nine-point lead heading into the final quarter, only watch the Lynx rally back to within two points at 47-45 with 42 seconds remaining after quickly scoring six points in just 13 seconds.

“It was stressful. My heart was racing. We just wanted to win and did out best to listen to what our coach had to say,” Britton said. “We were kind of angry when we lost ourselves.

“We decided not to worry about it and do our best and try not to fight and do what we can do and not be too aggressive.”

DiMizio, too, felt the pressure as the Lynx battled back.

“We did have a comfortable lead and then we struggled. The pressure got to us for a minute and we had to readjust and take a couple of deep breaths and get us back to our game,” she said. 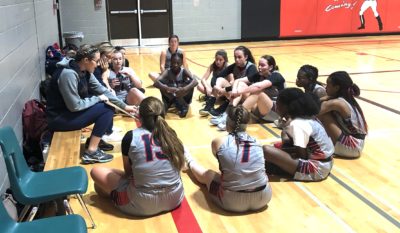 DiMizio feels the way the Reds faced adversity is a good sign for her team.

“A little pressure and showing we can overcome that will only help us in future games we have to play,” she said.

The Reds now square off versus the E.L. Crossley Cyclone Thursday with a trip to the championship final Friday on the line.

“This is absolutely what we hoping for,” she said. “We won consolation title the last two years and it’s nice to be on the championship side.

“This is what we’ve been building up for for the last three years, so I’m pumped.”

Britton is also looking forward to the challenge.

Lynx head coach Tara Poulin lamented a lack of production from the top of her lineup.

“My role players did what they had to do,” Poulin said.

Asked is she needed more from her big guns, Poulin didn’t hesitate.

Mick and Angelo’s/Johnny Rocco’s/Cracker Jacks Players of the Game: Reds centre Jordyn Britton with 15 and Vanier’s Mia Wendling with 12.

The St. Paul Patriots got off to a slow start but recovered to top the Holy Cross Raiders in a consolation quarter-final game at Governor Simcoe.

The game was tied 23-23 after three quarters before the Pats took control of the game in the fourth quarter.

“We did change our offence because we weren’t scoring coming out of the second quarter,” Pats coach Lauren Dempsey said. “We told the girls that’s not we like to play. We need high energy.”

The Patriots advance to the consolation semifinals and Dempsey said the team is looking forward to the challenge.

“We’re very excited to redeem ourselves. We got off to a slow start (loss to Denis Morris) and we just couldn’t come back.”