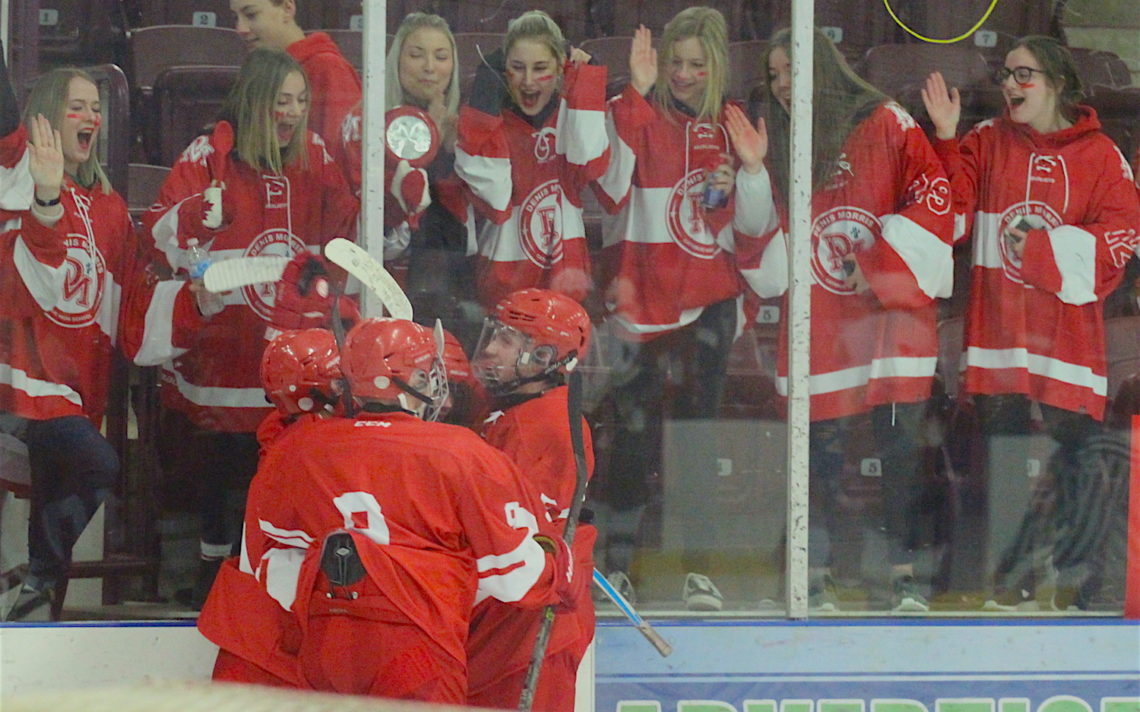 It’s hard to imagine a team asking more of a player than the Denis Morris Reds required of Joe Colasurdo this week.

The 17-year-old captain played significant minutes in every scenario imaginable, logging time on his regular shift, on the power play and killing penalties. 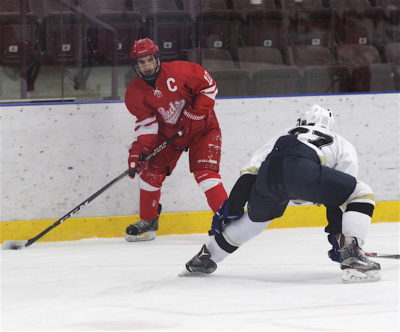 Colasurdo emptied his tank Friday afternoon as the Reds dropped a 2-1 decision to Holy Trinity of Oakville in the OFSAA AAA bronze medal game at the Seymour-Hannah Sportsplex.

It is the second straight year the Reds placed fourth at the Ontario Federation of School Athletic Associations championships.

The Reds were eliminated from the gold medal game with a 4-1 loss to No. 1 ranked Brooklin in the semifinals earlier in the day.

DM coach Billy McLaren tipped his cap to his captain.

“The amount of ice he saw in every game, I’m going to say was probably 30 minutes,” McLaren marvelled. “He was up and down the ice faster than anyone else.

“You can’t lean on anybody more than we leaned on him.”

Colasurdo, a Grade 11 student, has one more season of high school eligibility, but McLaren doesn’t see him coming back.

“He’ll be playing junior B or OJHL or he should get an offer from somewhere down in the States,” McLaren said.

Colasurdo missed last year’s OFSAA when he was called up to the Niagara Falls Canucks which rendered him ineligible to play.

He wasn’t going to make the same mistake this time around.

“Just being with the guys all year, it was so much more fun,” he said. “Seeing everyone and knowing we had to go to a game or practice made school so much more enjoyable.”

Colasurdo was quick to deflect any praise when asked about what a huge impact he made on the team.

“It feels good but we have of guys who work hard and compliment each other,” said Colasurdo, who played for the Niagara North major midgets this season. “One guy does their job and another guy does his job and you just keep pulling on that rope.”

In the bronze medal game, the Reds fell behind 1-0 when Cameron Rosborough scored early in the second. DM responded about five minutes later when Owin Hendsbee scored on a breakaway.

Holy Cross, who are coached by former Thorold Blackhawk Aaron Consoli, took the lead three minutes into the third on a power-play goal.

The Reds pressed hard for the equalizer, but came up just short.

“We talked about how we wished we could have done it for the older guys. It sucks because they’re moving on. We know a lot of the guys are younger and sticking together and will come back hard next year,” Colasurdo said.

McLaren was proud of his young team, which featured just five players returning from last season.

“We just finished telling them last year at this time we were in the bronze medal game and we imploded,” McLaren said. “We lost the game because we were so mad at ourselves for giving up that gold medal game.

“This year we had a good talk and we left it on the ice. We wouldn’t have expected any less.”

McLaren, who said 18 of the 24 players indicated they would return next year, feels the experience will do nothing but help his club down the road.

“It’s going to be huge. These guys love it and stuff like this, the intensity and the emotion, that’s the grab for them.”

In the morning game, Hendsbee was again the lone scorer for DM.