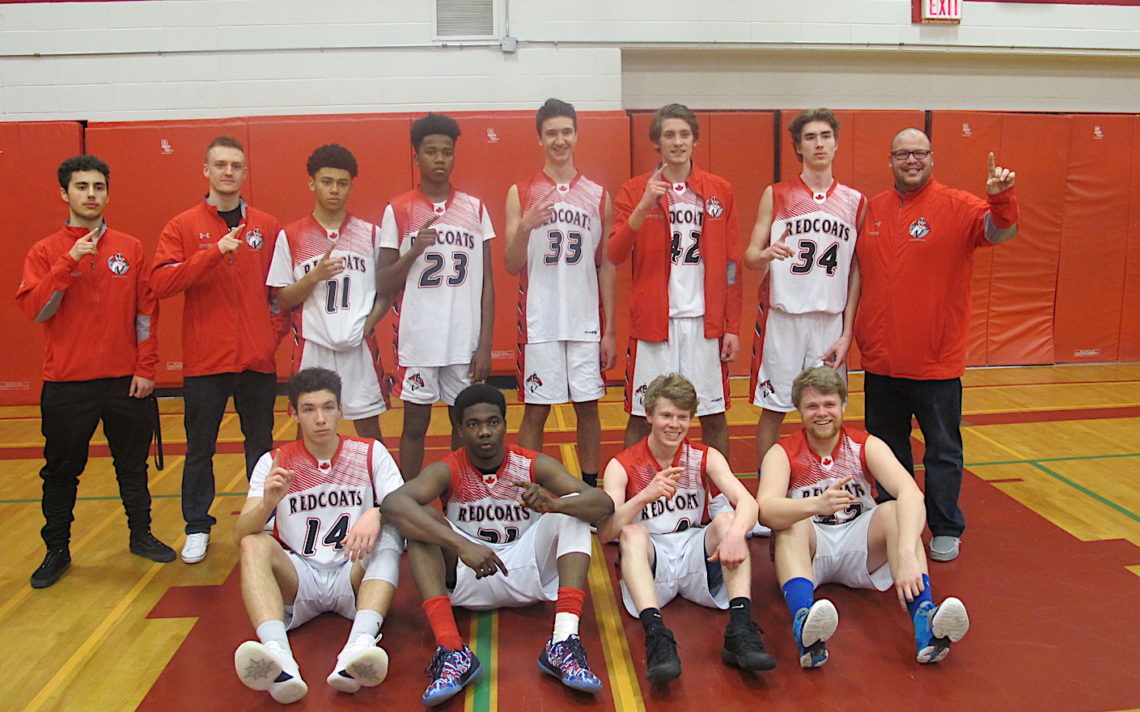 History repeated itself for the Governor Simcoe Redcoats Tuesday.

It is the second straight season the Redcoats topped the Reds for the title.

“It feels excellent,” Redcoats coach Shaun Feor-Spiece said after posing under the basket with his team for the traditional championship trophy picture. “The boys have worked for hard for this.

“At the beginning of the year, we sat down in the lockerroom with a chalk board and asked all the guys where they wanted to go. A city championship was up there, SOSSA (Southern Ontario Secondary Schools Assciation), and our ultimate goal was to get to OFSAA (Ontario Federation of Schools Athletic Association), so this is a step in the right direction.”

The Redcoats improved their overall record to 23-3 and now advance to the SOSSA playdowns Monday, where they will be hosts the hosts.

“I told the boys this is great, but now it means absolutely nothing,” Feor-Spiece said. “That’s the way we approached this game and the same for SOSSA.”

Simcoe fell behind early, trailing 15-12 after one quarter before regrouping to gain a 33-26 lead heading into halftime.

The Redcoats then put the game away with a solid third quarter, outscoring the Reds 22-11 to take a 54-37 lead after three.

“We came out with a half-court trap and that really turned them over and I hit a couple of threes,” Redcoats guard Alex Cochrane said.

Cochrane hit two of his four three-point shots in the third quarter and finished with 16 points overall.

“It’s nice. That’s what I practise and what I do,” Cochrane said of his three-point shooting. “It’s nice to see them go in and not miss.”

Cochrane said regardless of how things are going, it’s important for a shooter to keep shooting.

“It’s having the confidence to shoot it. If you go 0-for-5, you can’t hesitate to shoot the sixth one or chances are you are going to miss that, too.”

Cochrane said the Redcoats were able to keep to the game plan, even when they fell behind early.

“The best way to stay composed is to talk on defence,” said Cochrane, an 18-year-old, Grade 12B student. “If you can bring in on defence, the offence will come.”

Cochrane has a big fan in Feor-Spiece.

“Alex is a huge part of it (offence),” he said. “Teams really key in on Rahim (Bardi, who led all scorers with 27). If Alex is left open, he’s a flame-thrower.”

Cochrane would love nothing more than to win a SOSSA title on his home court, then have a shot at OFSAA in his final year at Simcoe.

“We went last year and lost, so it’s redemption (time),” he said with a smile.

All is not lost for the Reds, who take on the Blessed Trinity Thunder Thursday in a challenge game for the fourth spot at SOSSA.

“We stopped scoring, got a little bit cold, and turned the ball over a lot in the third quarter just making some silly passes,” Reds coach Randy Conlon said. “They played well.”

The Reds were without starting point guard Zubeer Liban, who was injured.

“I was happy for awhile. We were getting the looks we wanted but they did a real nice job on Noah (Honsberger). We can’t win when Noah scores seven. That’s not discrediting Noah, that’s giving credit to them.”

BSPN Star of the Game: Simcoe’s Rahim Bardi with 27 points.