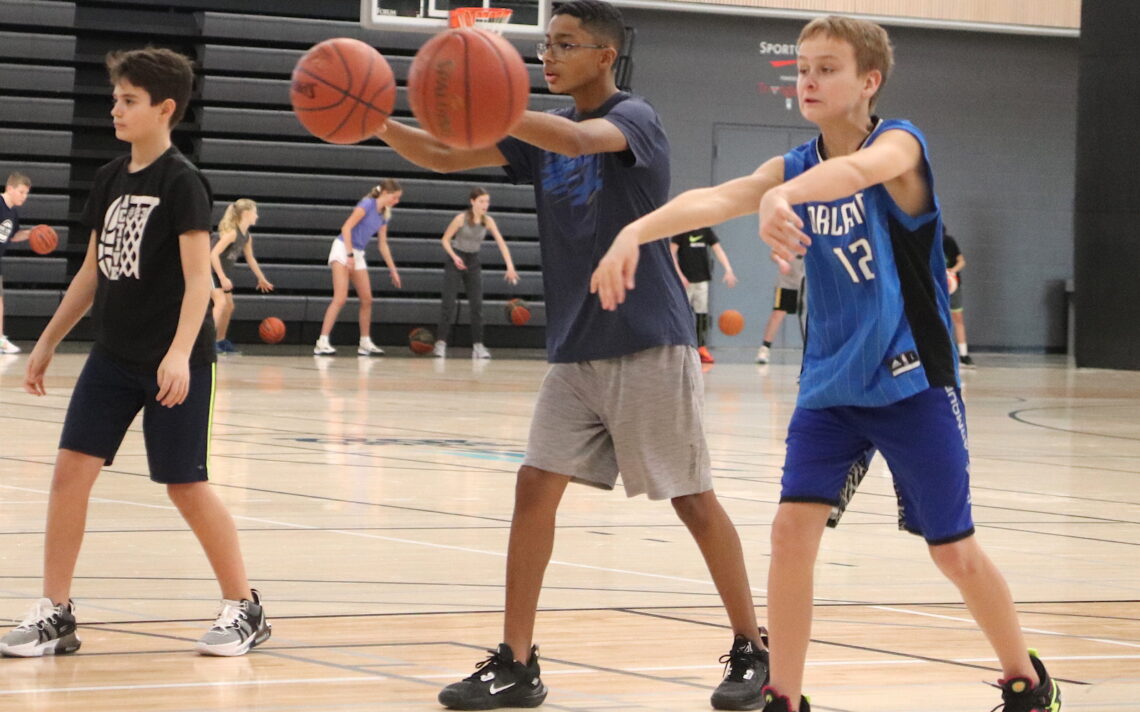 Done in partnership with the Underprivileged Youth Development Foundation, the morning session for children ages seven to 10 and the afternoon session for kids 11-14 were both sold out.

“It has been really good,” said River Lions head coach Victor Raso, who ran the camps with help from members of the Brock men’s basketball team. “We make it really fun and introduce them to basketball. Some of them play and some of them don’t so we do basic skills but make sure everything is fun and upbeat, and we have good games.”

Raso likes the camps as much as the kids.

“I don’t usually get to coach young people so being able to coach kids this age is fun. And now that I have a son I am more invested in it because I have to get better at coaching kids again. I haven’t coached kids since back when I was running camps in university.”

“It is just making sure that you have prepared enough to adjust to the levels,” he said. “With my guys, I don’t have to explain certain things but here you have to peel back the layers, speak slowly and make sure that when you are explaining a drill, you are very detailed with the right energy.”

Each age group is handled differently with the older kids.

“The drills can go by faster. You can do four or five drills instead of just one or two.”

The next camp will be held Feb. 17 and the $65 registration includes T-shirt, two tickets to a River Lions game and a swag bag. Visit the River Lions’ website to register.

Raso has also been busy getting his roster set for the upcoming Canadian Elite Basketball League season.

“We are in a good place,” he said. “We can’t start signing anyone until Feb. 1 but I have a few guys already locked up and I will use the next couple of months to finalize it.”

Raso will be making all the personnel decisions now that former co-general manager and head of basketball operations Antwi Atuahene is no longer with the team.

“It is all me. There is a lot more work on my shoulders this year,” he said. “It is great to be the one doing it all. If I had someone who felt the same way about certain things that I do it would be easier to split up the tasks. But there also becomes issues when you split up the tasks. You have to make sure the roles are super-defined and the plan is well understood.”

This year is Raso’s fifth year with the River Lions and the players the GM is looking at have changed.

“Early on the talent level didn’t need what it needs to be now, although, my team from the first year would do just fine in this league,” he said. “The pool of players, especially the pool of American players, has gotten so much better. Some of the people we weren’t able to get three years ago now are looking at our league very favourably.

That change has come about though word of mouth, players’ experiences and what agents are telling their clients.

“Before we would get guys who were cut from the (NBA) G League but now we are getting G League guys who made the NBA. Their organizations really liked then but didn’t bring them up. That opened up a whole world of players.”

Things have also changed with the overseas players available.

Training camp for Niagara will start nine days before the team opens play on May 26. Raso can’t wait.

“Now that January has hit and the team building is going on, I am getting more fired up.”

He has been keeping his coaching skills sharp by coaching the senior boys squad at St. John Henry Newman Catholic Secondary School in Hamilton.

“I am enjoying it. Obviously it is a huge step down and it is very different but at the same time there’s lots of things I wanted to work on that I don’t get to do in a 20-game season,” Raso said. “It’s great to be able to do that and work on my communication skills.”