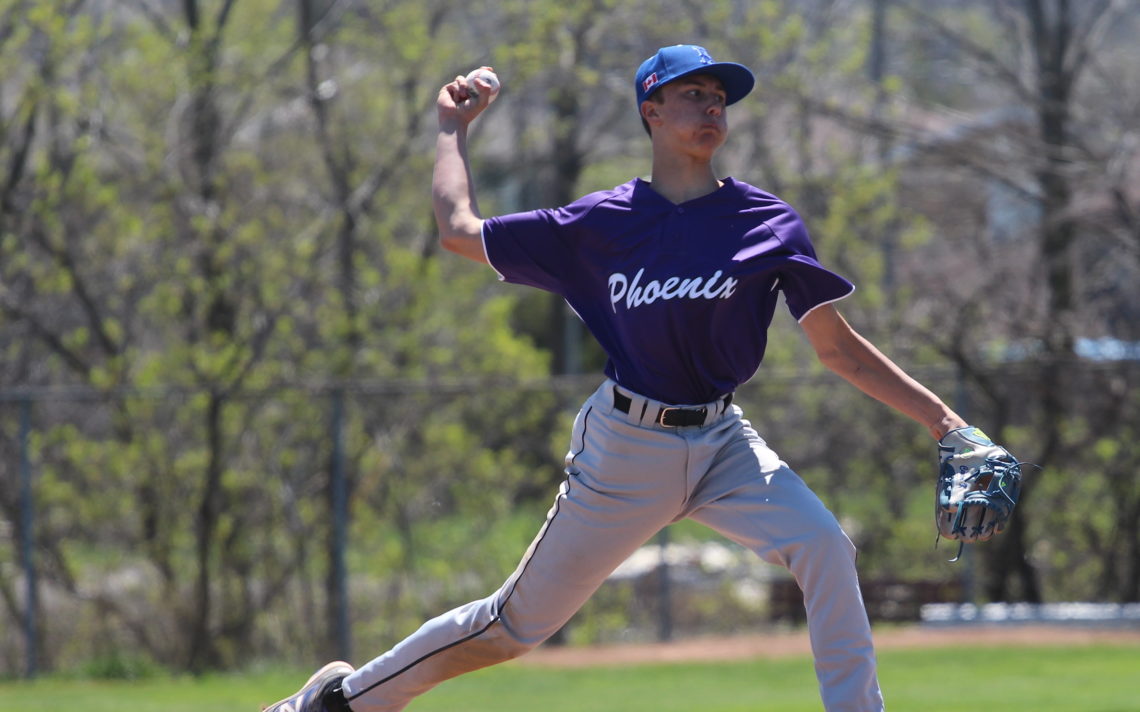 St. Francis’ Carter Krawchuk fanned 11 batters over four innings and drove in three runs to lead the Phoenix to a  12-1 win over Denis Morris Monday. Photos by BERNIE PUCHALSKI.

Ben Lannan does a little bit of everything for the St. Francis Phoenix.

The Grade 9 student not only anchors second base on defence, but he’s also the club’s leadoff hitter and pitches in on the mound from time to time.

Lannan more than earned his keep Monday with three walks,  a single, and a scoreless inning on the mound as the Phoenix defeated the Denis Morris Reds 12-1 in a Niagara Catholic Athletic Association boys baseball game at George Taylor Field.

The Reds were playing their first game of the regular season after winning a tournament in Thorold last week.

Lannan led off the game with a single, then drew three consecutive walks and also scored a pair of runs.

“I just try and set the table and get the offence started,” Lannan said. “We lost 7-5 (in our first game) and we had some trouble getting on base.

“I’ve always been a lead off hitter.”

“He’s a nice, sound little second baseman,” Marcheterre said. “He’s the kind of glue guy who is always going to provide that stability and hopefully be a lead off hitter and set the table for Cole Carpenter and Carter Krawchuk and today he gave us a little bit of that.”

Lannan is also a point guard on the junior boys basketball team.

“Ben is a really nice kid,” Marcheterre added. “He’s kind of a cerebral guy. He knows how not to take himself out of at bats and not help out the pitcher, look for a pitch he can drive or work a walk.”

Lannan, who plays at the bantam elite level with the Hamilton Cardinals, finished off his afternoon of work fanning two of the three hitters he faced.

“It’s a hard transition, but you make it work,” he said of moving to the mound in the middle of a game. “When I was on the mound, it was a little scary.”

Lannan followed Carter Krawchuk on the mound. Krawchuk was dominant, fanning 11 over four innings and giving up just one single.

Marcheterre has high hopes the baseball program is on the upswing at St. Francis.

“We kind of have a building program in that most of the guys are Grade 9 or 10,” he said.  “Norbert (Tanacs) and Cole are two of guys who played any baseball before and all of a sudden this year we get a bunch of these guys like Carter and his brother Hudson and Ben and Cam Wirt.

“Now you get the feeling a couple of years down the road we might have a nice little ball team.”

The Reds appeared to have the inevitable letdown following a tournament championship.

“The enthusiasm wasn’t there that we normally have,” DM manager Henry D’Angela said. “We played reasonably well. The pitchers struggled to find the zone and walks kill you.

“They didn’t make a lot of errors out there.”

Krawchuk paced St. Francis’ offence with a pair of singles and three runs batted in while Wirt doubled and Carpenter singled. Tanacs added a sacrifice fly.

Kyle D’Angela collected the lone hit for the Reds. He also took the loss on the mound. The big left-hander featured good stuff, but walked nine in three innings.