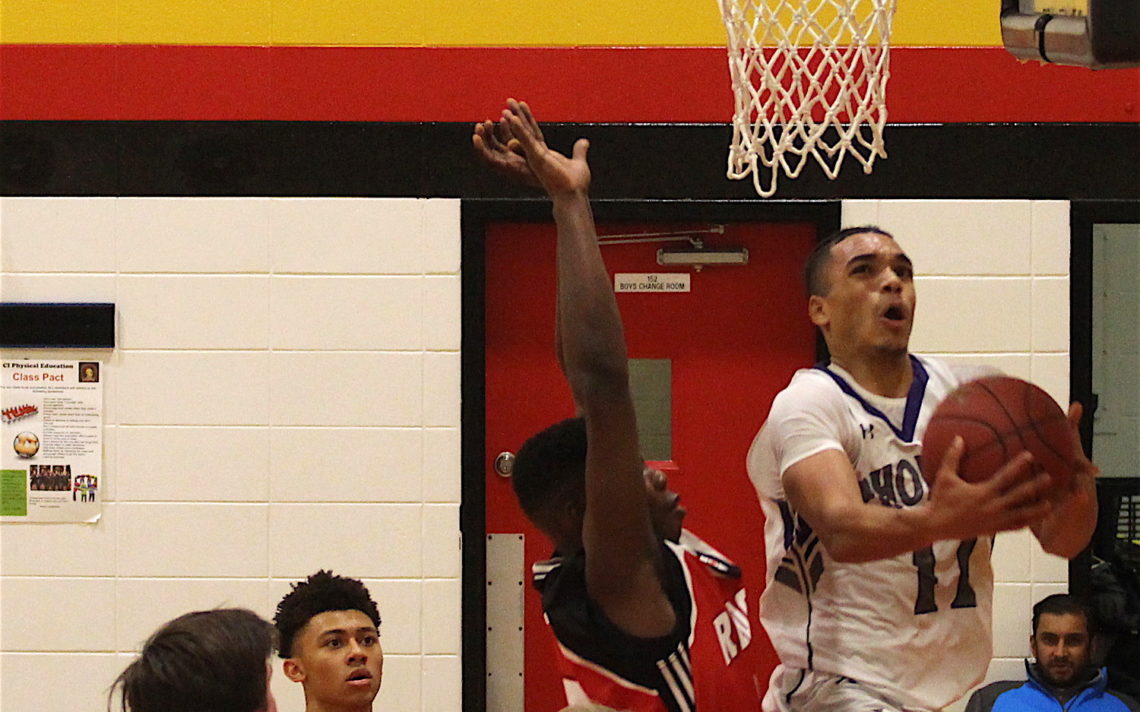 With four Standard tournament titles in the past six years and six in the last decade, the St. Francis Phoenix have become a little possessive about the championship trophy.

“This is our tournament,” said Tyrell MacLennan Thursday, after scoring 18 points to lead the Phoenix to a dominating 62-26 victory over the Governor Simcoe Redcoats in semifinal play.

“It is huge for us and it means a lot to St. Francis, especially in the last decade. We are hoping to go back-to-back this year.”

At the start of the tournament, teammate Sam Brathwaite also called the Standard “our tournament” and MacLennan isn’t worried if other teams don’t like that.

“We know it is our tournament and we try to prove that every day and every game,” he said. “We don’t take any team for granted and we just go out there and play our hardest.”

Phoenix coach Jon Marcheterre kind of wishes his team wouldn’t be so open about their presumed ownership of the Standard tournament.

“There’s no doubt that the history is there and it is hard to argue with it but the guys who were part of winning last year know that last year is last year,” he said. “The identity has been built by a lot of teams before them and it’s more like a stewardship for us.

“We want to give back to what we owe those who came before us.”

If the Phoenix are successful in repeating as Standard tournament champions, MacLennan will have a large role in the victory.

“He is probably the most complete package that you are going to get right now in Niagara in the high school ranks,” Marcheterre said.

“He is generally the first guy in and the last guy out,” he said. “He came back this year when he could easily have gone out with an OFSAA berth and having won the Standard tournament, but he has a goal of playing at the next level.”

The 18-year-old agrees with that assessment.

“There definitely been some development,” he said. “My shot has improved and my handle is better.”

He also a lot better at letting the game come to him and not panicking.

“I am a lot more comfortable.”

“He recognized we had a little bit of a short bench tonight and he played every minute and only ended up with two or three fouls,” Marcheterre said. “He was still playing physically and he was in on every play in some form or fashion but he’s a lot more disciplined this year.”

Marcheterre believes MacLennan has accepted the role as the Phoenix’s go-to guy.

“He does it while forgetting about the pressure of that and I just tell him to be himself out there.”

MacLennan also knows he has a number of talented teammates that can help the squad reach beyond last season when the Phoenix bowed out in the Ontario Federation of School Athletic Associations AA quarter-finals.

“We are trying to make it all the way this year,” MacLennan said. “We feel we have improved from last year and we have a good mix of young guys and returning players.

That mix was too much for the Redcoats Thursday. They trailed 7-0 early and facing quarter deficits of 16-6, 32-10 and 47-19. Simcoe was done in by too many turnovers, some poor shooting and a bunch of shots that were halfway down the basket and then spun out.

“We picked a bad night to lay an egg,” Simcoe coach Shaun Feor said. “I think the biggest difference between St. Francis and us is they have played in a lot of big games like this and our boys are trying to learn as well.

“St Francis sets the bar at a very exceptional level and we know where we need to be to be a great basketball team.”

“We’ve been shooting the ball well, moving the ball well and limiting our turnovers but tonight we were Dr. Jekyll and Mr. Hyde,” Feor said. “St Francis was definitely the superior team tonight and I won’t make any excuses.

“They are where we want to be in the coming years.”

BPSN Star of the Game: St. Francis’ Tyrell MacLennan with a game-high 18 points.

Up next: St. Francis advances to play Centennial in the Standard championship game Friday at 7:45 at St. Catharines Collegiate.