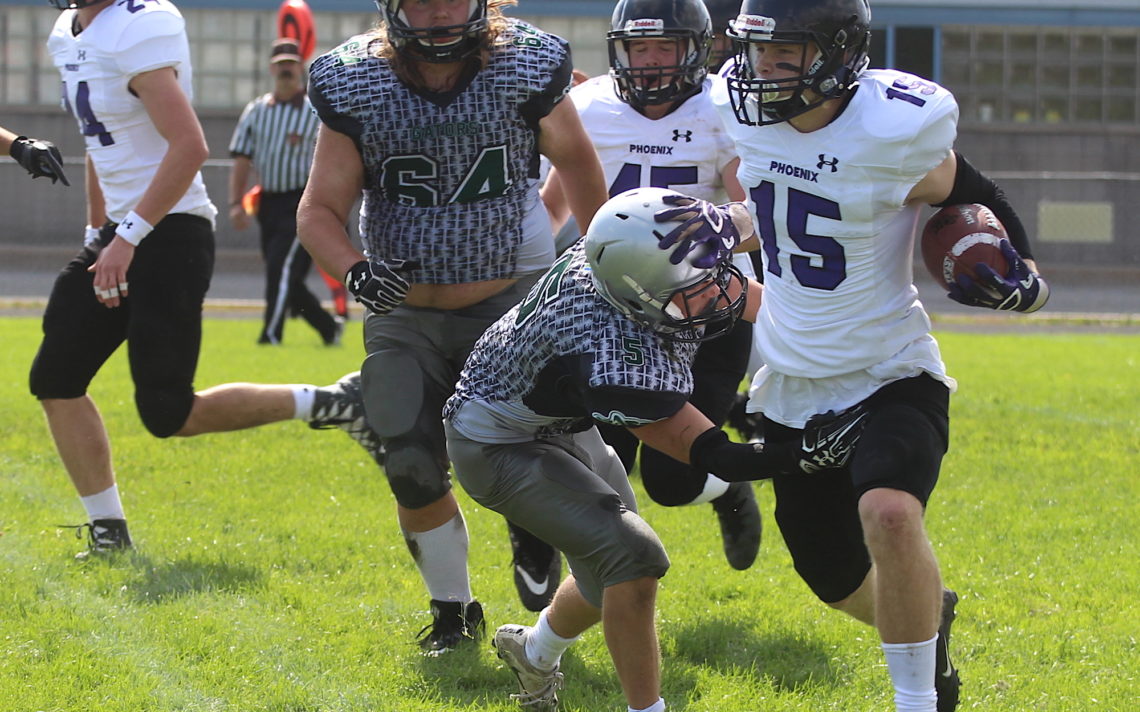 Quinton Duemo (15) is one of the key returning members of the St. Francis football team.

The St. Francis Phoenix are optimistic heading into the start of the Niagara Catholic Athletic Association senior football season.

“We graduated some key players, but we have some key players returning such as Ethan Reid, Quinton Duemo, Sacade Kasamba and a few lineman who are go-to guys,” head coach Jim Whittard said. “We have some guys who are going to have to step up even though they didn’t see a ton of time last year.”

Development will be crucial.

“We are trying to develop kids and it’s nice to see we have developed some Holy Cross kids who are still playing,” Whittard said, with a laugh. “We are developing youngsters to step up into big roles this year.”

Last season, the Phoenix welcomed Holy Cross players on to their squad when that school’s program took a one-year hiatus, but Holy Cross is back on the field in 2019.

The Phoenix opened their training camp with more than 50 teens and will enter the season with a healthy roster of about 46 players.

“I am super happy to be honest,” Whittard said.

He attributes the numbers to the positive culture that surrounds the school’s athletic program and its coaches.

“I am really impressed with all the coaches at the school and it tends to build a culture of trust,” he said. “These kids know if we run something that we are going to try and provide the best possible experience; not that other schools don’t try to provide that as well.”

And, of course, success breeds success.

“I think Chris McLean at the NCAA would agree that our school as a whole is fairly successful athletically.”

St. Francis has 14-15 returning players, including about a dozen starters. Expectations for the season are to get better every week and see where that takes the Phoenix.

“There are so many variables out there and all the teams are well coached,” he said. “I have either coached with or against these guys for many moons and I”m confident every program is very well coached.”

That leads to parity.

“If you look at our league there is a lot of potential and it’s anybody’s game, I think,” Whittard said. “There are the traditional powerhouses like Saint Paul and Notre Dame, and Blessed Trinity will be solid. Those are typically the big guns.”

That being said, Whittard likes the cards he has been dealt.

“I am happy with the number of athletes and kids with great attitudes that we have and they are all working really hard,” he said. “We have some different athletes this year and we have a few things we will keep in our back pocket.”

“We have some new blood on the coaching staff and everyone brings different experiences,” he said.