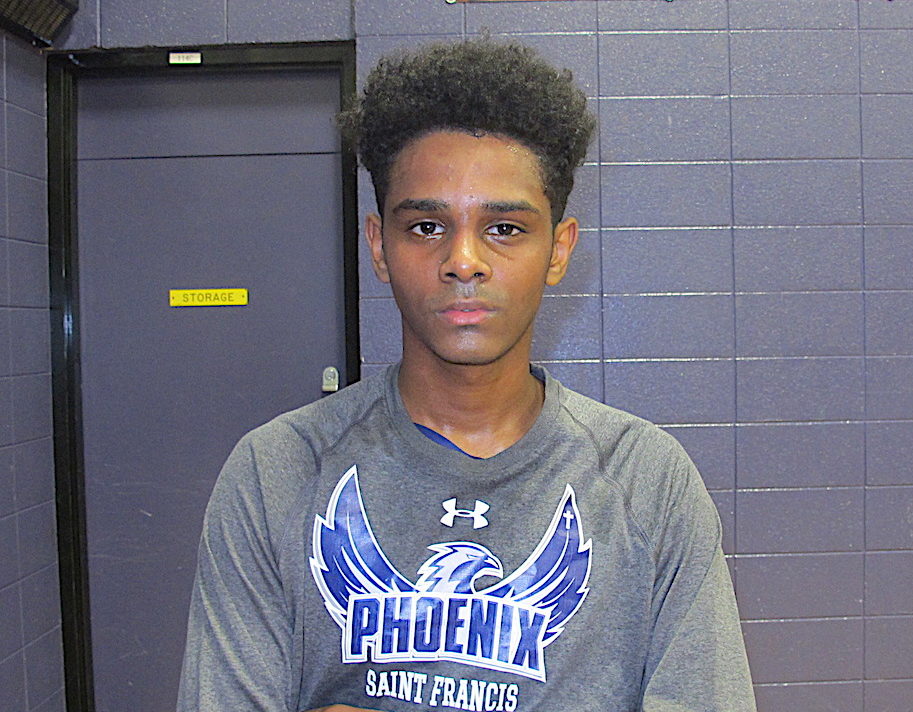 The present and future were both on display Tuesday night for the St. Francis Phoenix.

While established players such as Jack Riddell, Mark Mesiha and Tyrell MacLellan were filling the basket as expected, the next wave of Phoenix stars also chipped in.

Youngsters Abdu Elamin, Cam Van Hezewyk and Igor M’Baya received significant playing time and all showed enough promise to indicate the Phoenix will be in good hands down the road.

The result was a 78-39 triumph over the Thorold Golden Eagles in a Standard High School Basketball championship round quarter-final game.

St. Francis coach Jono Marcheterre believes it is necessary to get his bench players some time whenever possible, for a variety of reasons.

“It’s a matter of rewarding guys who support the guys maybe a little higher up on the depth chart,” Marcheterre said. “We’re trying to foster that we’re united as one in our efforts so it’s a good thing.

“We believe our depth and our ability to score from a lot of different spots on the floor and with a lot of different guys. We feel like if you try and take away one guy, we’re got an answer after that and that goes beyond the starting five.”

Elamin, a 16-year-old, Grade 11 student, was one of the most impressive off the bench, scoring nine points on a trio of three-points shots from his guard position.

“It’s pretty hard to fit it and compete with them,” Elamin said of his more experienced teammates. “It’s hard to get on their level.”

Elamin was elated to be able to contribute for the defending tournament champions.

“It felt great to score three threes and help the team,” he said.

Elamin said he is ready and willing to do whatever he can to help out.

“I just wait for my moment to come it and try my best.”

The No. 1 seed Phoenix knew they would be in for a tussle against a scrappy Thorold team, who did not seem the least bit intimidated.

“A lot of respect for the team they are,” Marcheterre said of the Golden Eagles. “They worked hard and made things very difficult for us. They take every little inch and were finding a lot of open looks.”

“We talked about being the underdog and we knew we would be playing against a very experienced team, a team that plays at another level and at a higher speed,” Dupont said. “It was good for our kids to have an opportunity to play in a game like that.

“You always want to come out on top but we knew what we were getting ourselves into and I don’t think we got embarrassed. The kids played hard and it’s something for us to build on for the rest of our season.”

Marcheterre is well aware his charges will need to improve their game as the competition becomes stiffer this week.

“I feel like we have a lot better in us than we showed tonight,” he said. “What we’re trying to set for the tone for the season going forward it to get better every day. In this type of tournament we know the next game is going to be tougher. Getting to Thursday is the first big shot in the mouth and how we bounce back when we go out and have a team able to match with us, that’s when we will find out how good we are.”

The Sir Winston Churchill Bulldogs advanced to Thursday by doubling the visiting Holy Cross Raiders in a championship round quarter-final game.

Matt Ferron and Tinashe Dandato had six each for the Raiders. Adrian Waszak (5), Isaiah Amio (4) and Sebastian Balsom (2) rounded out the scoring.

Up next: The Phoenix take on Governor Simcoe Thursday at St. Catharines Collegiate at 6 p.m. in a championship round semifinal game.