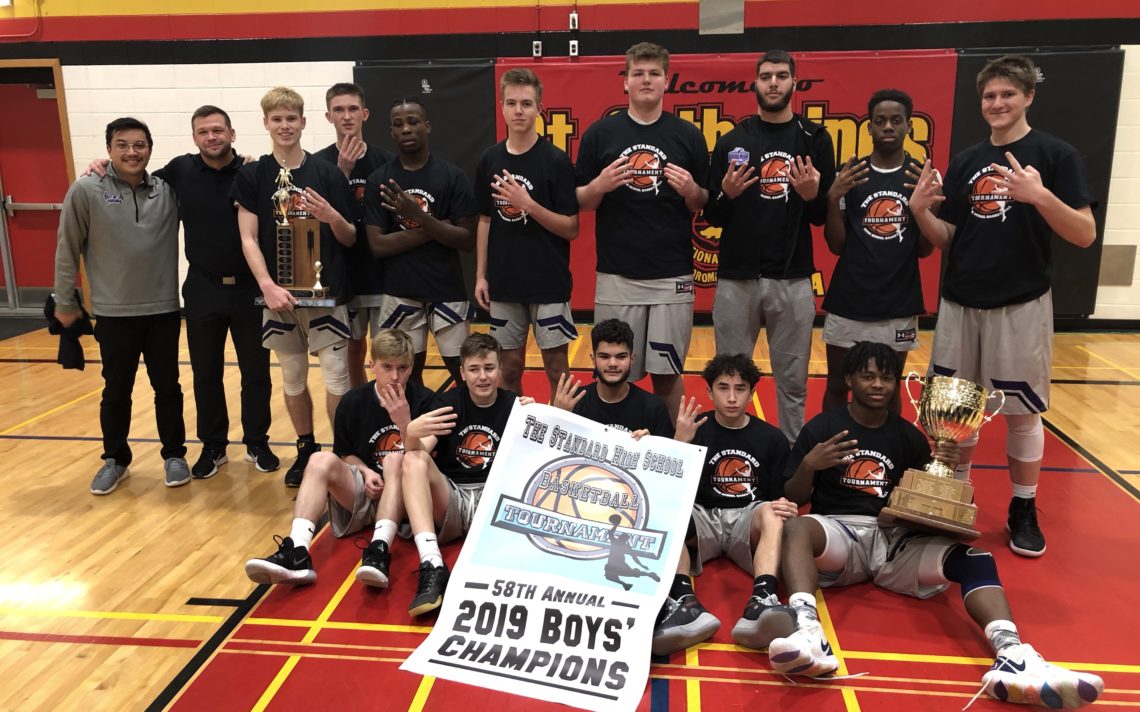 The St. Francis Phoenix wrote their names into the record book Friday night.

The Phoenix topped the E.L. Crossley Cyclone 70-58 to capture the 58th Standard High School Basketball Tournament, becoming the first team to win the championship four years in a row.

“It’s something really special for the school,” St. Francis head coach Jon Marcheterre said after the traditional championship team photo was taken. “When you look at some of the great schools and the runs they’ve had over the years and just to know we’ve done something that no one else has ever done, it’s special.” 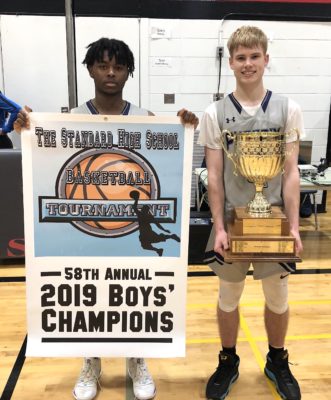 The Phoenix have now won nine Standard titles since 2007/08.

“My brother-in-law (Pat Sullivan) started it and we’ve worked really hard to build a program,” Marcheterre said. “Within the last 15 years, that number is pretty incredible.”

The No. 1 seed Phoenix were prohibitive favourites to four-peat and didn’t disappoint.

“The beauty of it is other than Igor (M’Baya) it’s a different group every year so it never gets old at all,” he said. “Every group has its only little story.”

Tournament most valuable player Quinton Duemo stepped up with 34 in the final while M’Baya added 17 and Sacade Kasamba 10.

Those contributions were key and expected, but Marcheterre was also proud of a couple of other players who may have gone unnoticed.

“We started a guy (Cole Carpenter) who this was first year playing basketball,” Marcheterre said. “He’s a baseball player and he did not play basketball in high school until Grade 12 and we also have a soccer player (Andres Pelaez). They are both very intelligent and just good athletes.”

The Phoenix had their hands full with the No. 2 see Cyclone who gave St. Francis all they could handle.

Crossley led 21-17 after one quarter and 34-29 at the half. The Phoenix led 49-46 after three before pulling away in the fourth quarter.

“We certainly didn’t take them lightly,” Marcheterre said. “We recognized a lot of what they were hopefully going to try and do. We thought the game was going to go through T.J. (Hurley) and he had a heck of a game. It was try to slow him down a bit and hope their depth and our play makers and depth would show up.

“We were confident in what we could do. It was just a matter of executing our plan and trying to limit T.J. The game plan worked out and but it definitely wasn’t without any stress. It was a tough one.”

Prior to Friday’s final, Crossley head coach Brian Bleich described the game as a battle between the established basketball powerhouse at St. Francis going up against the young, up and coming E.L. Crossley Cyclone.

The future was almost the present as Crossley led at the half before the Phoenix rallied for the victory.

“Almost but we ran out of gas,” Bleich said. “It was the physical part of their game. They are physical and we aren’t quite there yet because we have younger players.”

“They are good and I am not going to take away from that,” he said. “They are physical but they are also great players.”

Bleich was ecstatic with how his young squad performed.

“We played well, we shot the ball well at the beginning and then we had a bit of the third quarter where we kind of dropped off and Quinton Duemo went off for some threes.”

Crossley’s younger players didn’t shy away from the spotlight with Grade 10 player T.J. Hurley and Grade 11s Ryan Bleich and Owen Dobbie all shining in the championship game.

“That is the future of Crossley basketball,” he said. “And then my junior team won today at the Myer tournament. We have a good future at Crossley.”