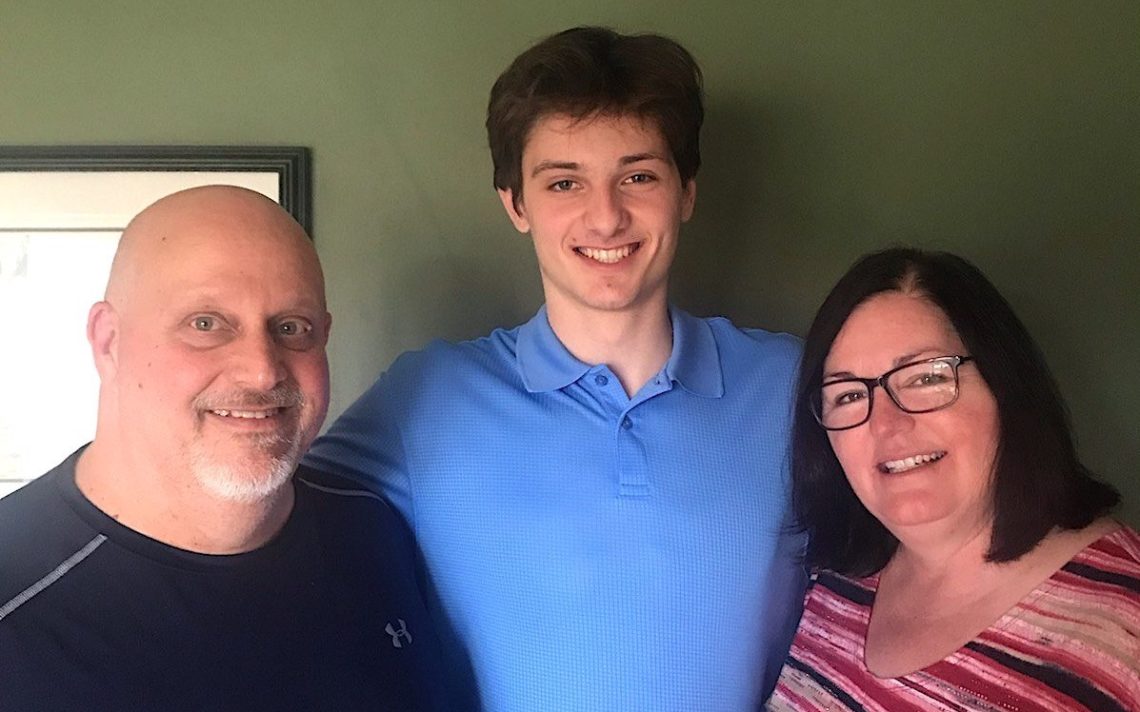 Peterborough Petes’ second-round draft pick Sam Alfano is pictured after the draft with his parents, Maureen and Steve Alfano.

Sam Alfano’s nervous Saturday morning came to an end when he was selected in the second round and 23rd overall in the Ontario Hockey League draft by the Peterborough Petes.

“You get more and more anxious as the picks go by and you are waiting for a phone call or for your name to pop up on the screen, or anything.”

A few picks before Peterborough’s selection was posted on the internet, the Southern Tier Admiral right winger got a call from Petes’ general manager Mike Oke telling the 15-year-old Cayuga native his named would soon be called. As he talked to Oke on the phone, he heard his family clapping when his named appeared on the screen. He was watching the draft with his parents, Maureen and Steve, and two of his grandparents who live on the same property.

“He (Oke) just told me welcome to the Petes,” Alfano said. “I know the other players who went to the Petes for a while now and I am so excited to get started. I can’t wait.”

His first reaction was one of relief and joy.

“Yes it is over,” he said, with a laugh. “It was really exciting and you are trying to process it that you are going to be part of the Peterborough Petes. It is a great organization.”

In the phone call with the Petes, they welcomed him to the team and told him they were happy to have him.

“They are excited for the future and I am pumped too,” said the Ontario Minor Hockey Association’s minor midget player of the year.

He has set high goals for the season.

“I want to be an important part of the team, I want to go in and make an impact and I want to be a difference maker for the Petes,” said the Grade 10 student at St. Jean de Brebeuf Catholic Secondary School in Hamilton. “I feel that I can do that.”

The 6-foot-3, 180-pound forward is hoping the restrictions surrounding the COVIV-19 pandemic will eventually loosen up and he can get to work on the ice getting ready for his rookie OHL season.

“I want to get to Peterborough too and see the arena,” he said. “That would be nice.”

It won’t be too wild a celebration Saturday night in the Alfano household.

“Obviously we can’t do too much or have people over but we will have my grandparents over and have a nice dinner probably.”

Alfano, who netted 36 goals and 63 points in 32 regular season games before ramping up his production even more in the playoffs with 26 points in 13 games, was spotlighted in the OHL draft guide with the following writeup.

“Sam is a big power forward that understands how to use his size to his advantage when trying to score goals. At almost 6-foot-4, he is very hard for the opposition to handle in the offensive zone, as he uses his reach and protects the puck extremely well. He is very good at timing things in the offensive end of the game and whether he’s stretching for a pass or coming through the slot for a pass or a tip, he really understands his skill in this department which makes him very dangerous offensively. He is a player that has really come on since the beginning of the season and ended the year as the SCTA’s leader in goals.”