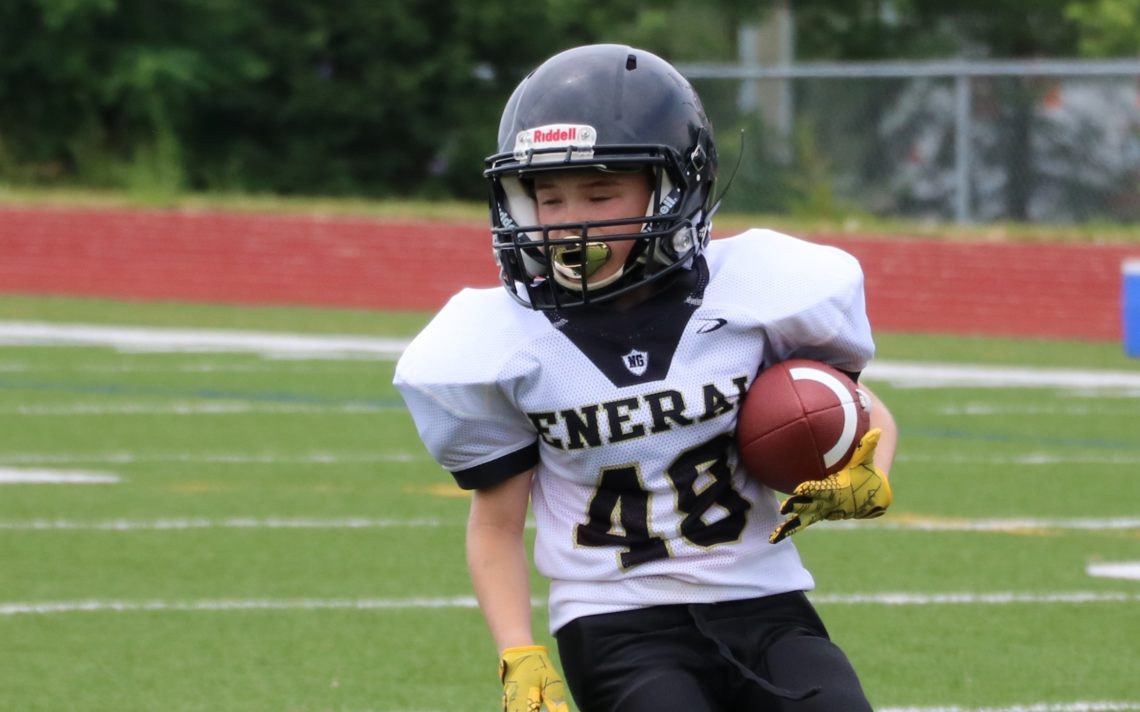 The Niagara Generals peewee (under-12) football team closed out regular season play in the Ontario Summer Football League with a dominating 55-0 victory over the Sarnia Sturgeons.

“This was a big game for us with major playoff implications. Our team came prepared this week and executed exceptionally well on both sides of the ball,” Niagara coach Kent Wakem said. “This was arguably the best performance our athletes have had all year.”

“Defensively, our players know what is expected of them regarding field assignments and they typically execute the game plan very well,” he said. “This game was no exception and they only gave up one first down the entirety of the game.”

On offence, Wakem pointed to one specific group.

“Our linemen were the stars of the show this week, executing their blocking assignments and allowing our backfield to move the ball to great effect,” he said. “Typically linemen are the unsung heroes but they are the most important set of positions on an offence in my opinion and should be applauded for the work they do.”

Defensively Jake Bover recorded a fumble recovery for the Generals.

Niagara enters the playoffs as the third seed.

The Niagara Generals bantam (under-14) football team dropped a hard-fought 14-7 decision against the Chatham Kent Cougars.

“Our athletes played with integrity and grit,” Niagara coach Bruce Macrae said. “They should hold their heads high. We will bounce back.”

The Niagara Generals atom (under-10) squad fell 26-0 to the Brantford Bisons Sunday.

It was a game where Niagara’s offence struggled to move the ball.

“We had a few good runs by Jackson Fraser, Jake Brewster and Karson Stevens but we failed to convert them into touchdowns,” coach Andrew Lewis said. “We lacked the ability to break Brantford’s contain and our run blocking struggled mightily.”

Niagara will learn lessons from the loss.

“This will be a game the coaches take back to the drawing board and review how we can improve for the playoffs,” Lewis said.

Niagara’s defence hung tough in the first half of the game.

“We forced a few turnovers and punts which kept the game close. We could have done a bit better job on containing the runs, however, overall our defence played well,” he said.

The defence had some big stops led by Eli McLean and Ryden Lamb-Mascia.

“This is one we can all learn from,” Lewis said. “We need to clean up some aspects of our game to give us a chance to make a run in the playoffs.”