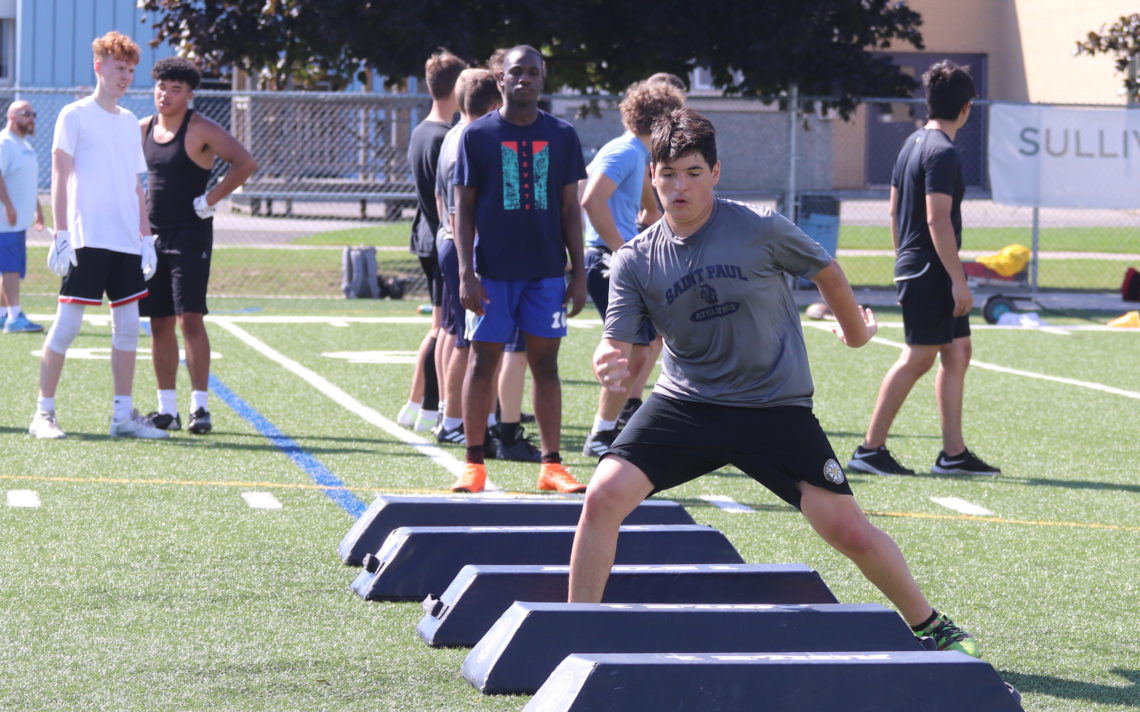 Smiles were everywhere when the Saint Paul football team returned to practice last Wednesday after losing the 2020 campaign to the COVID-19 pandemic.

“I haven’t been out here for a while so it feels really good,” said Grade 12 student Elijah Pappin. “We are all very excited.”

Returning to the field is a big deal for the 17-year-old Niagara Falls resident.

“For me, it is very important because I want to pursue it after high school is over. I want to be the best that I can be.” 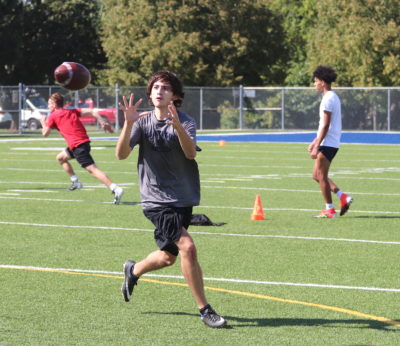 The 6-foot-3, 205-pounder knows what he needs to do to get a chance to play at the post-secondary level.

“I have to be dominant on the field,” he said.

He feels the biggest task in front of the team right now is conditioning, but he is confident he is ahead of the game.

“I have been practising since March of last year,” he said.

Pappin is expecting another good year for the Patriots.

Head coach Rick Oreskovich was more than happy with how things were going on the first day of practice.

“We weren’t sure what to expect after losing a year of football so we are pleasantly surprised,” he said. “We have 33 kids out and I didn’t expect that many. There are a lot of young, eager players — a lot of Grade 11s — and some have played and some haven’t played.”

Other schools also seem to be in good shape for players.

Oreskovich could sense the excitement among his players.

“After being sedentary for the last year and a half, I think a lot of them need to be playing a sport within a team structure. They need the structure, they need the teaching, they need to be a part of something and I think the kids have always had great opportunities at Saint Paul and all the other schools to do what they want to do in sport.”

The long-time coach was delighted to be back.

“I miss football,” he said. “As I age and as I am nearing the end of my football career and my teaching, I still have a passion and a joy for being out here with players. It has been a big part of my life.”

This season will be a year like no other.

“I have to be careful with expectations this year as opposed to previous years. I am going to have to work a little harder than I normally do given what we have to work with but we will be OK.” 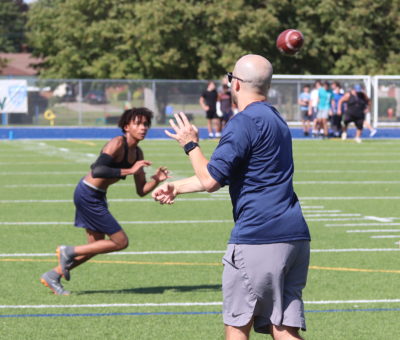 There will be a number of challenges ahead.

“I think it is going to be the physical part of the game; teaching the hitting and teaching the tackling. And if we have a lot of players who haven’t played before, teaching the skill positions,” he said. “It is going to require a slow process. Other teams are very experienced. We are not.”

He doesn’t expect fitness to be a major issue.

“I look at the kids we have and they are in fairly decent shape. We will find out.”

Oreskovich expects the one-year hiatus from sport will lead his players to appreciate the opportunity even more.

“I hope they do, he said. “It is a privilege to play and once they get involved in sports they need to commit to that sport and see it through the good times and bad times. They learn a lot from that, It is a life-learning procedure playing team sports. You learn a lot about yourself, your friends and you will have memories that you will have for the rest of your life. Not everyone can experience that.

Saint Paul has committed to fielding both junior and senior football teams this teams. Rick is the senior football head coach and his brother, Joe, is the junior head coach. Teachers Paul Fenich and Rick’s son, Nick, also help out as well as a number of community coaches including Rick’s son, Andrew.