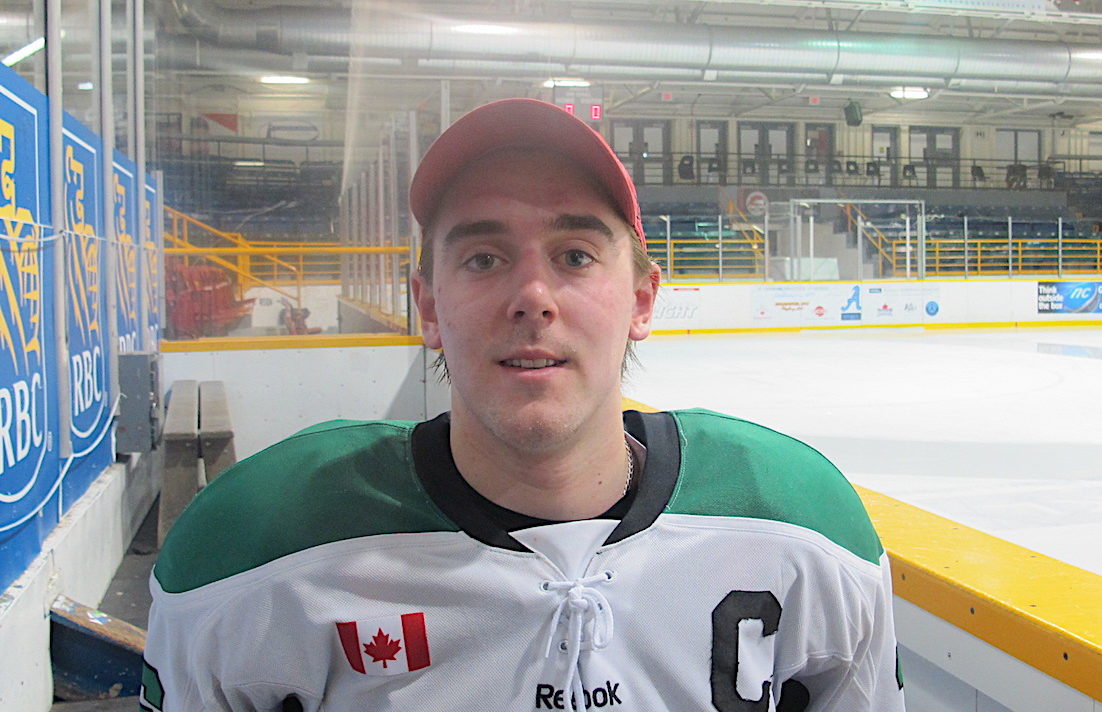 Pelham captain Thomas Young scored in double overtime to give the Panthers a 4-3 win over the St. Catharines Falcons. Photo by: BILL POTRECZ

The Pelham Panthers continue to be a thorn in the side of the St. Catharines Falcons.

The Panthers topped the Falcons for the third time this season Friday and did it in dramatic fashion.

Pelham captain Thomas Young scored on a penalty shot with 1:57 remaining in the second overtime to give the Panthers a 4-3 victory in Greater Ontario Junior Hockey League, Golden Horseshoe Conference action at Jack Gatecliff Arena.

The loss put an end to the Falcons 12-game winning streak and was their first defeat in 2018 and first since early December.

Young was awarded the penalty shot after being pulled down on a breakaway by Zach Lawrence. Seconds earlier, the Falcons Michael Davies was hauled down as he broke for the net on a two-on-one but no penalty was called.

Young was naturally pumped after emerging from the Panthers dressing room.

“I came to the back-up tender (Nicholas Kidd) and asked him what to do,” Young smiled. “I came down and was pretty nervous when I picked up the puck. I usually try and go high back hand. I’ve pretty much done that since I was little. I thought it was open and I guess it was.”

Young is thrilled the way the Panthers have come together as the season has progressed.

Young said the game plan was to try and tie up the high-powered Falcons.

“They have a lot of talent — (Liam) Dunda, (Mike) Davies, (Lucas) Smilsky — all those guys and with our young team we tried to play the trap and slow it down and it worked out,” he said.

Pelham coach Mark Barrick was proud of the way his charges executed the game plan.

“Part of my job is to get those guys to believe we have to play every team like we can beat them,” he said. “Why would you ever want to go out there and think you were going to lose?

“We had the ability to shut a very good hockey team down. It’s nothing fancy. It’s meat and potatoes hockey and everybody working hard at it.”

Falcons coach Frank Girhiny tipped his cap to the Panthers for a well-executed game plan.

“I give them credit. They beat us three times,” Girhiny said. “Mark has done a wonderful job getting them prepared to play against us. Pelham deserved to win that game. We let them hang around and didn’t finish when we had opportunities.”

Girhiny feels his club is being hurt by a lack of discipline.

“I feel our execution was very poor. I told them before the game that we’ve been getting away with it, but we’re been taking too many penalties. We can’t play with much flow and we can’t get everyone into the game. Once we stop doing that, we’ll be alight.”

The Falcons opened the scoring in the first when Dakota Miskolczi banked in his 16th from a bad angle. The Panthers tied it up with a fluke goal of their own that saw the puck take a bad bounce past St. Catharines goaltender Owen Savory. The Falcons held a 12-9 edge in shots.

The teams traded power-play goals in the second — Michael Davies for the Falcons and Chris Webber for the Panthers — before Davies’ second put St. Catharines back up 3-2 late in the period.

The Panthers tied the game with just under a minute to play and Miskolczi in the box when Trevor Meecham scored.

Falcon facts: Tanner Brown, Kyle West, Tyler MacArthur and Jaleel Adams did not dress for the Falcons  . . . Tyler Kennedy and Just Villani were scratched for the Panthers.

The Niagara Falls Canucks rallied from a 2-0 deficit after one period to defeat the visiting Thorold Blackhawks.

Spencer Blackwell and Mason Howard replied for the Hawks.

Up next: The Falcons host Buffalo Monday in a make-up game from earlier in the season. Game time is 7:30 p.m. rather than the usual 7 p.m.