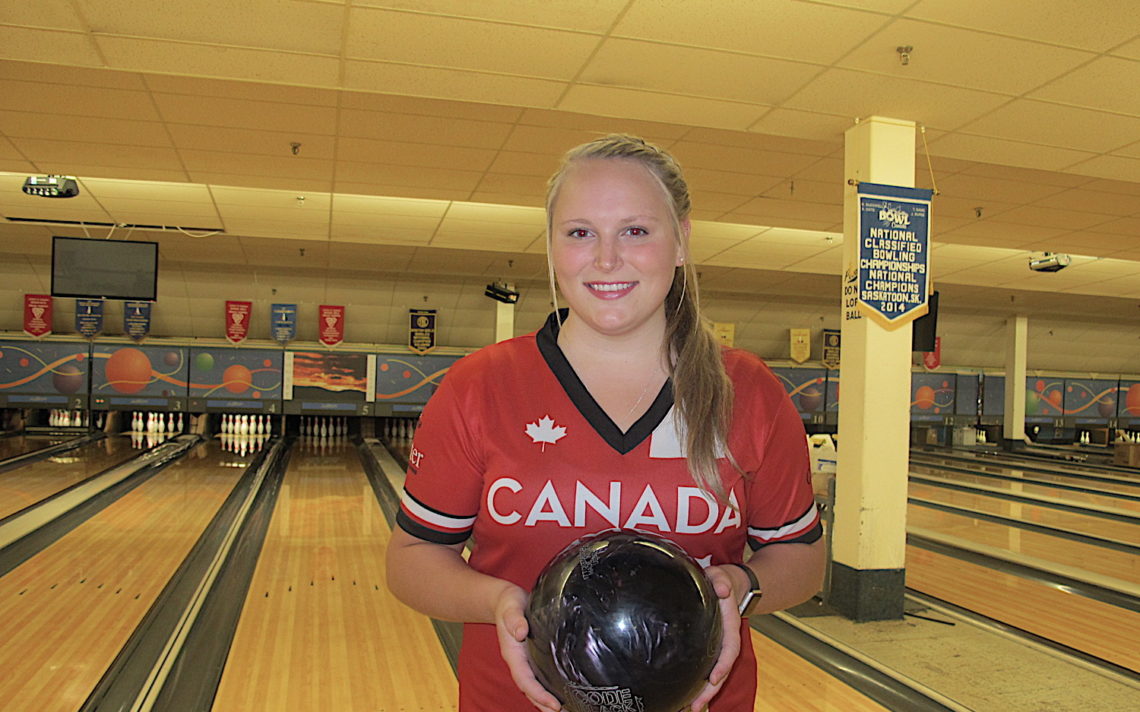 This is Day 5 of BPSN’s 12 Days of Christmas, a look back at some of our favourite stories from 2017. We hope you enjoy revisiting some of our top stories since our inception in September.

Miranda Panas couldn’t have picked a more opportune time to be at the top of her game.

The 22-year-old St. Catharines native qualified for the Qubica AMF Bowling World Cup in Mexico by rolling a 268 at the World Cup Nationals in Winnipeg.

Panas will represent Canada at the tournament which is an annual championship and the largest in bowling in terms of number of participating countries. Each country chooses one male and/or one female bowler to represent them in the tournament.

“It was amazing,” Panas said. “That was probably the best game I have bowled in my adult career so far in terms of my mental state and the physical repetition. I’ve never fully come together like that before in such a high pressure situation.

“It wasn’t at the world level which would be even better but at the national level it was a really good game and it felt really good for the timing of the to happen.”

Panas’ journey to represent Canada began back in January when she qualified out of the house round at Fairview Lanes. From there it was on to the provincials in Burlington, and then finally to the nationals where she averaged 210 over two days of match play against eight other provinces.

“It was a long route. It was quite a long process,” she said.

Success on the lanes is nothing new to Panas.

She has qualified for the provincials previously on numerous occasions and made it to the nationals twice. She also represented Canada at the World Games in Poland in July and following the tournament in Mexico will be off to Las Vegas for the WTBA (World Ten Pin Bowling Association) Championships.

Now, she will get to fulfil a dream and bowl for her country.

“It’s the best thing in the world,” she said. “I’m so grateful for it I can’t even put it into words. There’s nothing quite like it that I’ve ever experienced in my life and I will be forever grateful for every opportunity I have to go out on the lanes and compete for my country alongside my teammates.

Panas leaves for Mexico Friday with the tournament slated to begin Monday, Nov. 8.

She admitted she has mixed feelings as she prepares to bowl on the biggest stage of her life.

“I’ve been looking forward to this ever since I won at nationals. I’m a little nervous because I don’t know 100 per cent what to expect but I do know some of the competitors going are really good, world class bowlers,” she said.

Panas said her experience at the World Games will come in handy in Mexico.

Indeed. Panas indicated she’s not simply happy to have qualified.

She is going to Mexico to win.

“I have gotten to that point in my bowling career where I think I’m ready for that kind of achievement,” she said confidently. “For a long time it was weird, it was almost like I didn’t believe I could do that. I always believed I was good enough to be there but to actually win was something I hadn’t really been comfortable with until recently. Now, I’m thinking I do belong at these championships and I can win them.”

Panas has been fine tuning her game at Fairview and Jeff’s Bowlarama in Welland. She is also a big proponent of the mental side of the sport.

“When I get to the actual tournament that when I have to stay present and focus just on what is in front of me. One of the mottos I had going to nationals was focusing 100 per cent on what I could control and I think that helped me a lot.”

Panas, who will be accompanied to Mexico by her father Greg and mother Terri, is grateful her flight and accommodations will be covered by Bowl Canada. She also tipped her cap to Sport Canada, the CTF (Canadian Ten Pin Federation) and all of Team Canada’s sponsors for their support.

“We get a lot of help from the federation,” she said.

Panas recently graduated from Brock with a degree in kinesiology and is a beriatric educator at the Wharton Medical Clinic.