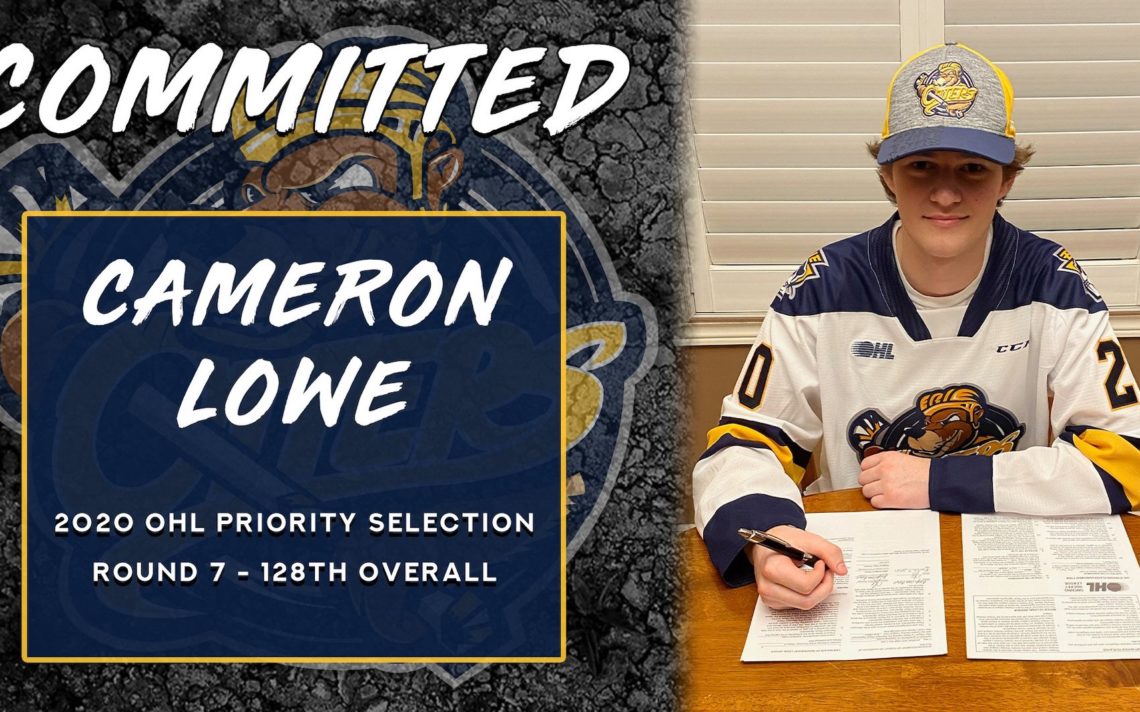 As well as gifts, phone calls and messages from friends and family, Lowe received a text from Erie Otters vice president of operations/general manager Dave Brown offering him a contract.

Lowe, a 6-foot, 156-pound centre, was selected 128th overall the seventh round of the Ontario Hockey League Priority Selection in 2020.

“Basically, it came out of nowhere,” said Lowe, a Niagara Falls native who attends Saint Michael Catholic High School. “They told me the news on my birthday, which was crazy.

“It was probably one of the best birthday presents I ever received.”

“I was startled. It didn’t expect it. It was a big goal of mine to make the team this year,” he said. “It was a shock and a bit of a surprise.

“I didn’t expect there to be a season due to the COVID. It was crazy news to receive.”

There has been no official announcement if the OHL will have a season, although the rumour mill is heating up.

“I’m hearing rumours about hub cities and stuff and a season coming up so I’m just preparing myself for that and waiting for the call to go to camp and get started,” Lowe said. “It’s kind of quiet right now. We’re just waiting for everything to be announced.

“They told me if there is a bubble this year that I’m going, I’m playing.”

“Cameron plays a very mature game and exhibits on ice character traits that our organization covets,” Brown said. “His 200-foot game and his determination to look after this team’s best interests are something that you appreciate, and we are thankful to have him as part of our organization.

“We look forward to his future as an Otter.”

Otters co-director of scouting Mike Battah said Lowe’s hockey IQ was also a factor in the organization’s decision to offer him a contract.

“Cameron is an incredibly smart player, which combined with his remarkable work ethic allows him to contribute in all game situations,” Battah said. “While impressive on the defensive side of the puck, he also possesses the skating and puck skills to allow him to contribute offensively.”

Lowe began the 2021/22 season with the St. Catharines Falcons of the Greater Ontario Junior Hockey League where he showed well in pre-season scrimmages.

“I appreciate all the confidence the Falcons had in me and the opportunities they entrusted me with,” Lowe said.

Lowe has a big fan in Falcons coach Tyler Bielby.

“The coaches and I were thrilled to work with Cam this year,” Bielby said. “He represents what the game is all about. Humble with his approach, yet relentless with his willingness to learn and get better. His hockey IQ is superior and that will allow him to adjust to the time and space.

“You don’t see too many two-way players at his age, yet Cam embodies what hockey people look for in a complete hockey player. In the short time he was with us, it was very apparent that he takes just as much pride in his own zone as he does in the O-zone.

“It’s a nice story during a challenging year.”