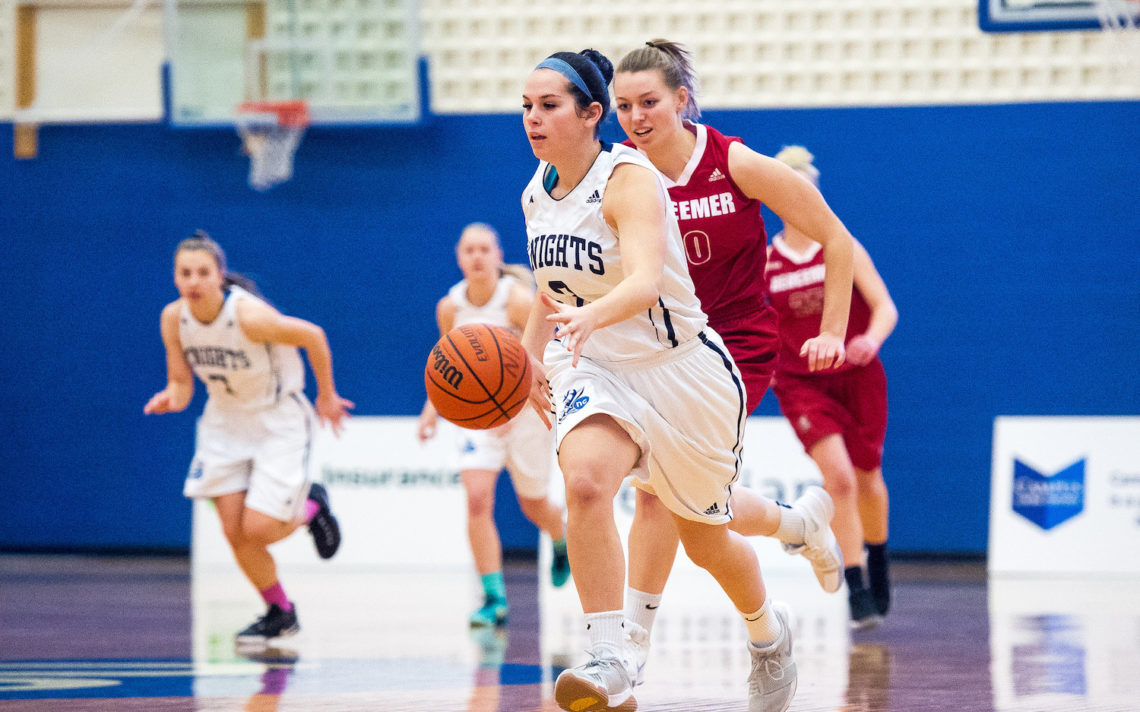 It was a good weekend for the Brock men’s basketball team.

The No. 2 ranked Badgers rolled past the Windsor Lancers 83-54 Saturday afternoon in front of a capacity crowd inside the Bob Davis Gymnasium.

The Badgers had three players in double figures led by Cassidy Ryan, who finished with 18 points, including three three-pointers. Dani Elgadi contributed with 16 points and nine rebounds while Johneil Simpson collected 15 points and five boards in the win.

The Badgers also defeated the Guelph Gryphons 99-88 Friday night on the road. Elgadi registered 26 points and 14 rebounds. Simpson collected 17 points and seven rebounds while Ryan and Tyler Brown chipped in with 17 and 11 points in the victory.

The women’s basketball team dropped a 68-52 decision to the No. 7 ranked Windsor Lancers Saturday night at home.

Despite only dressing six players due to a number of different injuries, the Badgers gave the Lancers all they could handle.

The women’s team also dropped a 76–44 decision to the Guelph Gryphons Friday night on the road.

Campbell finished with 17 points and four rebounds while Smith added 10 points, including two three-pointers. McPherson led the way on the glass, registering 13 rebounds while chipping in with eight points.

The Badgers return to action Wednesday at 6 p.m. when they host Guelph. Brock is also at home Saturday at 6 p.m. versus Waterloo.

The men’s hockey team was blanked 3-0 against the York Lions Saturday night at the Canlan Ice Sports in Toronto.

Clint Windsor registered 37 saves in the loss. York’s Mack Shields turned aside all 27 shots he faced for the shutout.

The Badgers also knocked off the eighth-ranked Guelph Gryphons 3-1 Friday night at the Seymour-Hannah Centre.

Windsor recorded 32 saves for the victory.

The team travelled to the University of Toronto to compete at the Fred Foot Meet.

Anna Wojtis had another successful meet, starting off the day by running the 60-metre hurdles in 9.39. Later in the day, she ran the 60-metre dash in the prelims with the time of 8.16. In the final, she bettered her time and achieved a season best with a time of 8.12.

The men’s volleyball team registered their first victory of the regular season as it defeated the Guelph Gryphons 3-2 Saturday on the road.

With Windsor leading 2-1 and leading 13-5 in the fourth set, Brock senior Tori Carroll answered with 12 straight serves to take a 17-13 lead on route to a 25-23 game-tying set. In the fifth set, the Badgers completed the comeback with a 15-8 victory.

The Badgers had five players in double figures led Laura Condotta and Renee Helmer who combined for 29 kills and 26 digs. Abby Jenkins collected 12 kills while Tori Carroll and Amy Cureton both chipped in with 10 kills each. Setter Emily Armstrong added a season high 52 assists and 14 digs. Libero Julia Balatbat rounded out the Brock leaders finishing with 20 digs.

Saturday saw each team playing a three-game round-robin to try and earn a top four seed and a berth into Sunday’s championship bracket.

The Brock varsity women, skipped by Terri Weeks, came the closest to making the final four finishing in fifth place. Their 2-1-0 record included wins over Algoma (9-1), Niagara College (8-2) and a loss to Laurier (1-5).

The Brock varsity men were without skip Eric Bradey on Saturday but fight their their way to a 1-2-0 record by edging Algoma (4-3), while dropping games to Niagara College (1-6) and McMaster (3-5). The Brock junior varsity men went 1-2-0 and the Junior Varsity women ended the round-robin 0-3-0.

The men’s basketball program went 1-1 last week, defeating the Mohawk Mountaineers 79-78 on the road, and losing at home to the Redeemer Royals 79-76. The decisions bring the Knights to 9-4.

In the win over Mohawk, second-year guard Van Hutchinson, Jr. finished with 30 points and 17 rebounds.

In the loss to Redeemer, the Knights were paced by guard Levi Mukuna, who had 24 points and 11 rebounds.

The Knights will be back in action Wednesday when they host the Conestoga Condors at the Welland Campus Athletic Centre.

The women’s basketball team went 1-1 in their two matchups last week, losing 87-42 on the road to the Mohawk Mountaineers, while defeating the Redeemer Royals at home. The Knights are now 8-5.

In the loss against Mohawk, the Knights were led by veteran guard Mary Ingribelli of St. Catharines who had eight points and seven rebounds.

In the victory over Redeemer, the Knights were paced by guard Courtney Kilyk. The Fonthill native finished with a team-high 22 points.

The Knights will be back in action Wednesday when they host the Conestoga Condors.

The men’s volleyball program lost 3-2 at home to the Humber Hawks and 3-0 on the road to the Mohawk Mountaineers to fall to 6-6.

In the Knights’ loss to Humber, Jake Williamson of St. Catharines was outstanding offensively, finishing with eight kills on just 10 attempts, while rookie standout Robbie Zalewski paced the team on defence finishing with a match-high 11 digs.

The women’s volleyball team lost 3-1 at home to the Humber Hawks and 3-0 on the road against the Mohawk Mountaineers to fall to 7-5.

In the loss to Humber, the tandem of Jordan Koslowski and Rachel Rivers finished with 14 and 13 points respectively.

In the loss to Mohawk, Amy Bultje was the Knights’ best offensive option, reaching double digit kills for the first time this season.

Niagara Athletes of the Week

Van Hutchinson, Jr. of the men’s basketball program has been named this week’s male athlete of the week based on a 30-point performance in the 79-78 victory over the Mohawk Mountaineers. Hutchinson was also very impressive in this weekend’s loss to Redeemer, contributing 19 points and 11 rebounds.

“Van continues to play great basketball,” Knights head coach Mike Hurley said. “He continues to show why we can rely on him in the big moments during close games.”

Hutchinson, Jr. is averaging 18.2 points and 11.8 rebounds through the first 13 games of the season.

Mary Ingribelli of the women’s basketball program has been named this week’s female athlete of the week after recording eight steals in the program’s latest 80-65 victory over the Redeemer Royals.