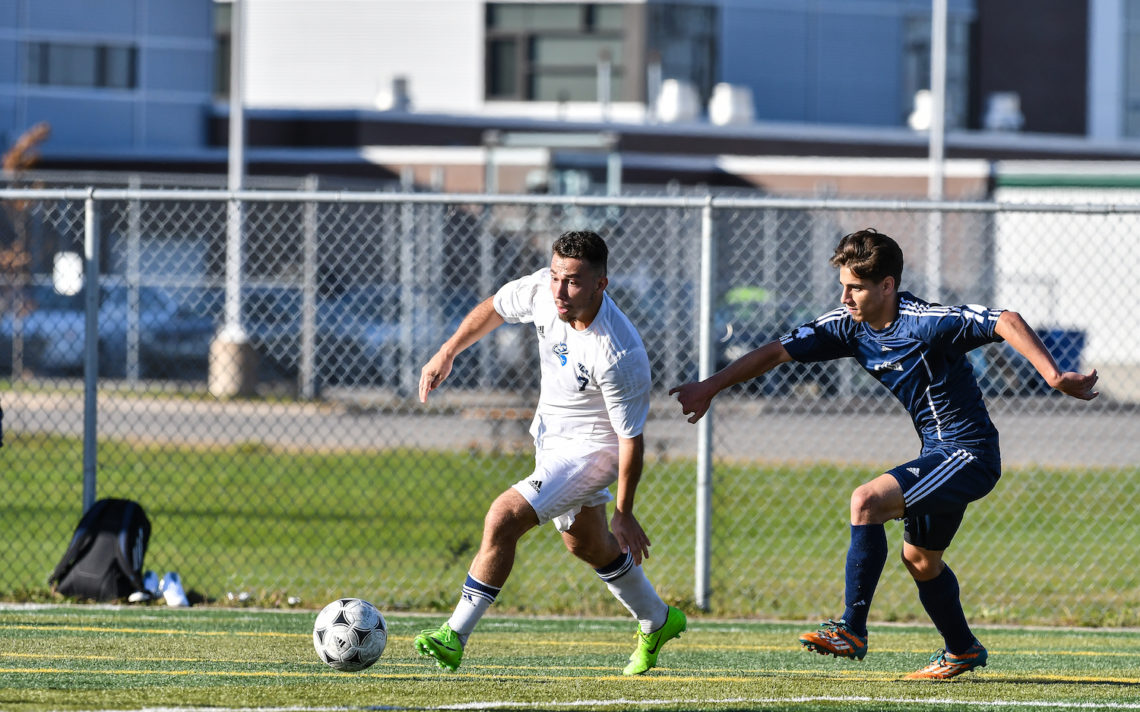 For Carleton, Westlane product Wilson Birch had seven catches for 68 yards in the loss and Holy Cross alumnus Mike Domagala booted field goals from 11 and 47 yards out. In league rankings, Domagala is second in punting average (42 yards), seventh in field goal percentage (74 per cent) and eighth in scoring (65).

Saint Paul grad Harry McMaster had five catches for 101 yards, including TD grabs of 15, 26 and 37 yards, to help Western thump Ottawa 63-10. McMaster is eighth in the league in receiving yardage (582) and has four touchdowns. Also for Western, St. Francis grad Antonio Valvano caught a five-yard TD pass and had assists on three tackles, and Lakeshore product Cole Majoros caught a 23-yard pass.

The men’s basketball team clinched the RBC Classic title with a 97-86 victory over the Ryerson Rams Saturday at the Bob Davis Gymnasium.

Brock had all five starters in double figures led by Dani Elgadi, who finished with a game-high 31 points. Cassidy Ryan contributed 21 points and six rebounds while Daniel Cayer added 18 points and seven boards. Rounding out the Brock leaders were Johneil Simpson, who collected 13 points, including three treys, and Tyler Brown, who chipped in with 11 points and eight assists.

The Badgers also rallied to defeat the Calgary Dinos 82-70 in the opening game of the 2017 RBC Classic.

Brock had five starters in double figures led by Simpson, who registered 18 points, highlighted by three treys in the final three minutes of the game. Elgadi contributed with the double-double adding 17 points and 11 rebounds. Ryan added 13 points and six rebounds.

The Badgers open the 2017-18 regular season at home Wednesday at 8 p.m. when they host the Western Mustangs at the Bob Davis Gymnasium.

The men’s hockey team dropped a 5-3 decision to the Concordia Stingers Friday night on the road.

The Badgers also dropped a 3-2 decision at McGill the next night. Evan Morden and Adam Lloyd scored for Brock.

The men’s lacrosse team ended the CUFLA regular season with a 24-11 victory over the Laurentian Voyageurs Sunday afternoon at Alumni Field.

The Badgers held a two-goal lead at the half 8-6, before erupting for 16 second half goals on route to their 12th straight conference victory.

The Badgers end the regular season with a 12-0 record and will host a playoff game Sunday at Alumni Field.

The Brock University women’s hockey team recorded their first win of the regular season as they defeated the UOIT Ridgebacks 5-1.

Jensen Murphy turned aside 32 of the 33 shots she faced for the victory.

Prior to the game, the Badgers celebrated their 20th anniversary of the program. On hand for the opening ceremonies were members of the 1998 team, including former head coach and the founder Todd Erskine. Brock also recognized Sarah Brooks, one of the former great players who was on the original team, as she was presented with the Badger of Honour Award

The women’s basketball team ended the preseason with a 63-51 loss to the UPEI Panthers to close out the Laval Tournament.

The Badgers also dropped a 69-56 decision to the Laval Rouge et Or to open the tournament. Findlay had 17 points and Ana Caldeira Rua 10 points, nine rebounds and four assists.

The Badgers will open the OUA regular season at home Wednesday at 6 p.m. when they host the Western Mustangs at the Bob Davis Gymnasium.

The Badgers opened with a loss in the quarter-finals against the Toronto Varsity Blues and lost 12-6. Eryn Brown finished the game with three goals while Victoria Halliday  added a goal and two assists. Mel McCall and Brittany Schwende chipped in with one goal each.

The Badgers rebounded with a 9-2 win versus McMaster to play for fifth place on Sunday. Brown and Lindsey led the scoring with three goals each with Schwende adding in one goal with two assists. McCall and Hannah-Brie Scott added one goal each.

The Badgers finished their season with a 12-5 loss for sixth place against the 2016 OUA champions, Trent Excalibur. Brock came out strong the first half with Langdon adding  the first goal in the first minute. The score was tied 3-3 at half. The Excalibur were able to get on a role in the second half to extend the lead and win 12-5. Schwende, Brown and Highfield also scored.

On the women’s side Pauline Sergnese led the Badgers running 19.10 over the five-kilometre course, and finishing third overall for the final medal spot. She was followed closely by Joanna Francolini crossing the line in 19.41 for sixth place. Cassandra Hinz rounded out the women’s side with a 17th place finish in a time of 21.14.

The men were led by first year transfer Jeremy Mol who ran 23.46 for eight kilometres, finishing 11th overall and third among varsity runners. Aric Emiry was next across the line in 24.06 for a 15th place finish. Following right behind was Owen Grabell in 16th place running 24.06. The final scorers for the Badgers were Dan O’Rourke and Umberto Lopardo both in a time of 24.11, finishing 22nd and 24th respectively. Rounding out the team was Lucas Salazer-Reid in 33rd in a time of 25.28, Jadon Bernatsky finishing 35th in 25.55, and Harrison Enns 37th overall in 26.00.

The men’s efforts were good enough to score 44 points, narrowly edging out Waterloo by three and successfully defending their 2016 Brock Open title.

The Badgers travel to Windsor next weekend for their final meet of the season at the OUA championships.

The men’s soccer team clinched an OUA playoff berth as they defeated the Waterloo Warriors 2-0 Saturday on the road.

The Badgers would get a big break in the 73rd minute as Waterloo defender knocked it in his own goal to take a 1-0 lead. Just one minute later, Jaden Nearing-Rampersad scored to make it 2-0 and secure a playoff berth for the first time since the 2011 season when they finished with a 5-8-3 OUA record.

The Badgers close out the OUA regular season on the road Sunday in a key OUA West final positional matchup with the Laurier Golden Hawks.

Athletes of the week

Ieradi, a fourth-year community recreation major, helped lead the women’s hockey team to a 1-1 record in the opening weekend of OUA action. In the Badgers 5-1 victory over the UOIT Ridgebacks, Ieradi record three points adding two goals and one assist, including the game winning goal which was her 30th of her career.

Harris, a first-year social science major, helped lead the men’s lacrosse team to two victories this past weekend as they ended the the CUFLA regular season with a 12-0 record. In two games, the rookie longpole was outstanding defensively and showed his athleticism adding four points, including two end-to-end goals.

Elgadi, a fifth-year humanities major, led the men’s basketball team to big victories over the Calgary Dinos and Ryerson Rams to capture the RBC Classic title. In two games, Elgadi averaged 24.0 points and 8.0 rebounds per game. He recorded a double-double versus Calgary adding 17 points and 11 rebounds. In the win over Ryerson, Elgadi registered 31 points and five boards.

Jordi Amores of the men’s soccer program has been named this week’s male athlete of the week. Amores notched a pair of goals during the Knights 3-1 playoff victory over the University of Toronto-Mississauga Eagles Sunday.

The fourth-year native of Niagara Falls has been an anchor for the Knights this season. And on Sunday, the former Holy Cross standout was at his best converting twice.

Amores will look to continue his red-hot play this week when the Knights travel to the OCAA Championship being hosted by Fleming College. The Knights open the three-day event Thursday when they take on the George Brown Huskies.

Female Athlete of the Week

Bethany Langendoen has been named this week’s female athlete of the week. Langendoen scored a pair of goals for the Knights during the team’s two games this week.

The second-year forward from St. Catharines joined the Knights prior to the 2016 season. She previously played for Heritage Christian High School. She will graduate from the Niagara College pre-health sciences program this April.

The Knights won their final regular season game 2-0 against the Redeemer Royals and lost their cross-division qualifier to the Seneca Sting 6-2. The loss to Seneca eliminated the Knights from the OCAA championships and puts an end to the 2017-18 season. The Knights finished in fourth place in the OCAA west division.

The Knights ended their regular season with a 2-1 victory against the Redeemer Royals, and then booked their ticket to the OCAA championships with a commanding 3-1 cross-division victory over the University of Toronto Mississauga Eagles Sunday.

The Knights’ goal scorers in the Redeemer game were Jacob Therrien (Welland) and Connor Diacur (St. Catharines). The win against Redeemer clinched second place in the OCAA west division. In the game against UTM, Amores had a pair of goals early while defender David Fimiak (St. Catharines) notched the first of his OCAA career. The Knights travel to Peterborough to compete in the OCAA championships October 26-28.

The men’s basketball program opened the 2017-18 season with a 70-60 home court victory over the Mohawk Mountaineers. The Knights were led offensively by Deysean Thompson with 18 points and eight rebounds and Jordan McDonald with 13 points and 15 rebounds. The team will travel to Mississauga Wednesday to take on the University of Toronto-Mississauga Eagles who are making their home court debut in the OCAA. The Knights return to the Welland Campus Athletic Centre Nov. 5 when they host the St. Clair Saints.

The Niagara Knights women’s basketball program lost their season opener 70-65 to the Mohawk Mountaineers. The Knights were paced offensively by guard Mary Ingribelli (St. Catharines). The Governor Simcoe graduate shot 50 per cent from beyond the arc, finishing with a game-high 23 points. Another strong performance came from fifth year guard Courtney Kilyk (Fonthill) finishing her first game as a Niagara Knight with a double-double (22 points, 11 rebounds, five assists, and three steals). The Knights travel to Mississauga Wednesday to take on the University of Toronto-Mississauga Eagles. The Knights return to the Welland Campus Athletic Centre on Nov. 5 when they host the St. Clair Saints.

The Knights finished off their exhibition schedule with a 3-0 loss against the Brock Badgers and a 3-0 victory over the Redeemer Royals. The Knights open their regular season when they travel to Sudbury Friday to face off against Cambrian College.

The Knights finished off their exhibition schedule with losses against the Brock Badgers (3-0) and the Redeemer Royals (3-0). In the game against Brock, rookie outside hitter Jaydon Milne was awarded the Knights’ player of the game. The Knights open their regular season Friday at Cambrian College.