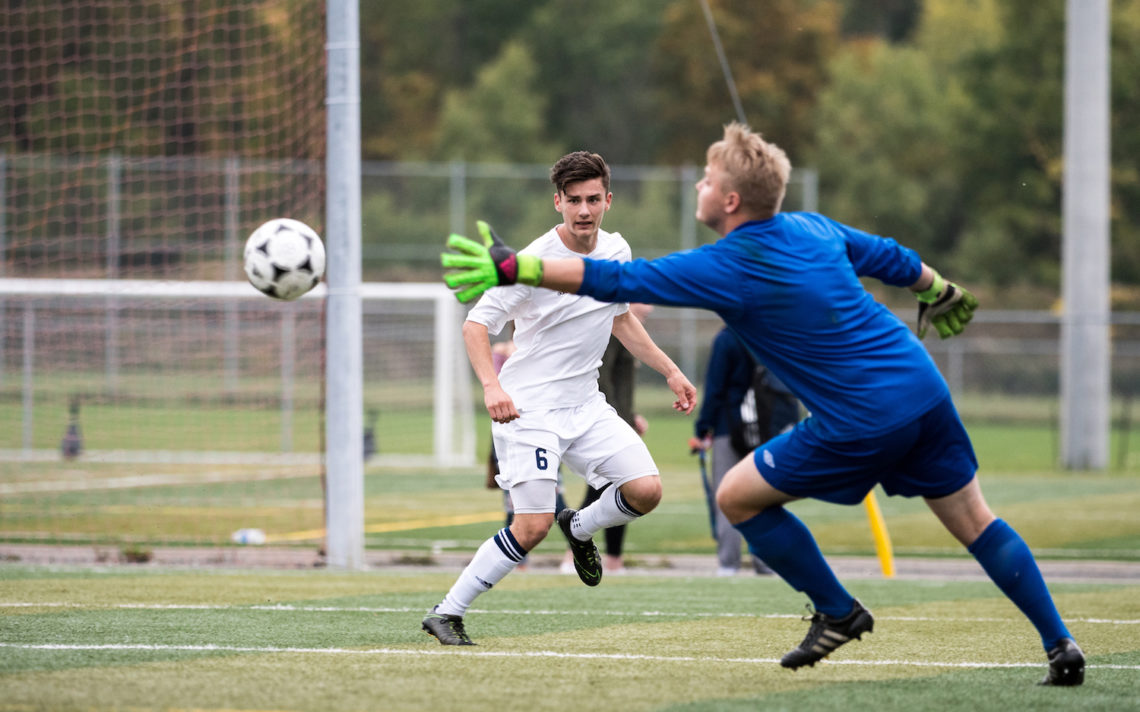 Connor Diacur crosses the ball during the Knights first goal against the St. Clair Saints Shannon Halliday kicks a free kick for the Knights during the team’s 0-0 draw with top-seeded Fanshawe. PHOTO BY: Ryan McCullough

Haughey, a second-year physical education major, helped lead the Brock women’s rugby team to a school record fifth win of the season as they defeated the Laurier Golden Hawks 32-10 in the consolation semifinal. Haughey led all scorers with 12 points adding two tries and a convert. Brock will now play the Western Mustangs for fifth place and a spot in the top division in 2018.

Slade, a fifth-year kinesiology major, led the Badgers to three victories this weekend. In three games, he recorded 18 points adding five goals and 13 assists. In the Badgers 21-2 victory over McMaster, Slade registered his 300th career point, becoming just the second player in school history to reach this mark. In 64 career games, Slade has recorded 302 points, including 122 goals and 180 assists averaging 4.72 points per game.

Hill, a fifth-year sport management major, led the Ultimate Frisbee team to their first Division 2 national championship. The Badgers posted a perfect 6-0 record, including an upset over the No. 1 ranked University of Quebec and Montreal) in the gold medal final. Hill, the team captain, led the team in assists and defensive blocks.

The men’s lacrosse team won their 10th straight as they defeated the McMaster Marauders Sunday afternoon at Alumni Field.

Slade finished with a game-high 11 points registering two goals and assists. Neal recorded four goals while Van Der Zalm, Connor Ham and Rybka all added two goals each. Latrell Harris and Joshua Harris both went the length of the field and scored. Adding single goals were Rehanek, Houghton and Woodland.

The Badgers also defeated the Western Mustangs 12-8 in overtime.

The men’s and women’s golf teams competed at the 2017 OUA championships hosted by the University of Ottawa at the Loch March Golf and Country Club.

Graham and Rowan were both named to the OUA second team all-stars.

The men’s rugby team dropped a 50-29 decision to the Western Mustangs to fall to 4-3 on the season.

Spencer Karn led the Badgers scoring with three converts and two penalty goals for 12 points. Jeremy Brownridge, Jackson Amos, Tim Sullivan and Zack White all recorded one try each as the Badgers collected one point in the loss.

The Badgers, who have clinched a playoff berth, will close out the OUA regular season at home Saturday.

Brock had a great day on the Henley course hosting the Brock Invitational Regatta.

Lightweight women were led by their world champion coxie Laura Court to second place finishes in the eight and four. The light weight women also placed third in the pair. The duo of Amanda Martin and Anna Maloney had a punishing schedule racing in the women’s pair placing second and then only forty minutes later winning the women’s double. That was followed by the women’s four of Isabella Mazzarollo, Bri Spanics, Jenna Osborne, and Kayla Krasnor with a solid second place finish and then they combined with four freshmen to place fourth in the eight.

The No. 1 seed Badgers had a disappointing showing at the OUA championship.

Brock were eliminated 5-3 by the No. 9 seed Waterloo Warriors. The Warriors finished last in the regular season but brought their best to the Badgers following an earlier upset against the Ryerson Rams.

The Badgers came into the game the clear-cut favourite but struggled to capitalize on early opportunities. The Badgers left the bases loaded in the first inning and were only able to cash in one run.

Down 4-2, the Badgers could not get a sustained rally going late as a combination of arms out of the Waterloo pen were able to keep the Brock lineup off balance.

The Badgers won 13-5 against UOIT Ridgebacks, lost 13-5 against Queens Gaels, and had a hard fought 12-8 loss Sunday against the Toronto Varsity Blues.

During the first game the Badgers led the first half 6-1 with Ally Godin allowing only one goal. Brock added in seven more goals in the second half.

The Badgers had a hard fought loss against Queens Gaels. Brown recorded two goals while Lindsey Highfield added a goal and two assists. Mete and Porter rounded out the scoring with a goal each.

Brown collected one goal and one assist with singles going to Halliday, Langdon and Highfield versus Toronto

The Badgers finished their regular season 7-6 and advance to the OUA playoffs in Kitchener beginning Friday.

The men’s hockey team dropped a 4-3 decision in a shootout to the York Lions Saturday night at the Seymour-Hannah Centre.

Clint Windsor made 49 saves in goal for Brock.

The men’s team opened the season with a 3-2 decision loss at Guelph Wednesday.

Ayden MacDonald and Matt MacLeod had the Brock goals.

Windsor recorded 28 saves in the loss.

“I was very happy and proud to be a part of today’s event,” Kissi said. “Our University and in particular Brock Sports have a very important responsibility to not only bring this great community together but also lend our voices to various social issues.”

On the court, the Badgers defeated the Redeemer Royals 107-69 in an exhibition game held in front of the massive crowd.

The Badgers had three players in double figures led by Cassidy Ryan who finished with a game-high 24 points going 9-for-12 from the field and 3-for-4 from beyond the arc. He also pulled down six boards and added three assists. Dani Elgadi contributed with 19 points and five rebounds while Johneil Simpson added 16 points and four assists.

The women’s basketball team dropped an 82-52 decision to the Bishop’s Gaiters at the Dalhousie Tournament.

Brock also dropped a 67-60 decision to the Dalhousie Tigers.

Leading the Badgers offence was Shannon Northey who recorded 15 points and eight rebounds. Kristin Gallant collected 12 points and five rebounds while Rua and Baelie Campbell both chipped in with nine points each in the loss.

The Badgers cross-country team travelled to Hamilton for the Marauder Bayfront Open.

The day began with the women’s race where Annelise Martin and Erin Laughlin were the only two females representing Brock. Martin led the women to the finish line with an impressive time of 27:47 and 56th place, with Laughlin following coming in 61st with a time of 28:02.

The Brock men’s team came away with a championship at the Canadian University Ultimate Championships.

Sunday morning, Brock beat Sherbrooke 14-7 in the quarter-final and followed that with a 15-8 commanding win over local rival McMaster.

Up against tournament #1 seed UQAM (University of Quebec and Montreal) in the final, Brock used a full team effort to pull off the upset and bring home the first Division 2 National Championship in school history.

The women’s team team placed fifth with a record of 2-3.

Connor Diacur of the men’s soccer program has been named this week’s male athlete of the week.

Diacur was a catalyst for the Knights during his team’s 2-2 draw with the St. Clair Saints on Saturday.

Diacur, a fourth-year forward from St. Catharines, set up both goals for the Knights.  From his wing position, the former Sir Winston Churchill Bulldog executed sensational crossing passes, allowing for striker Carlos Williams to twice convert into a wide open net.

Diacur is a graduate of sport management program and is currently enrolled in the public relations post-graduate program.

The Knights return to action Wednesday when the team wraps up the OCAA regular season with a home field matchup against the Redeemer Royals. A win will see the Knights clinch second place in the OCAA West Division.

For the second time this season, Shannon Halliday of the women’s soccer program has been named female athlete of the week.

Halliday was a defensive force for the Knights during the team’s 1-0 loss to the St. Clair Saints.

The fifth-year team captain and native of Welland, Halliday has been instrumental in the Knights defensive scheme that has limited opponents to just eight goals in nine matches in 2017.

“Our captain is a joy to coach and is one of our most committed players,” Knights head coach Rob Lalama said. “She leads our back line and is a real physical presence on the field.”

The Knights conclude the 2017 OCAA regular season Wednesday when the team hosts the Redeemer.

The Knights lost 4-1 to the Fanshawe Falcons and tied the St. Clair Saints 2-2.

Third year forward/midfielder Alex Latham of Welland was the lone goal scorer for the Knights in their loss to Fanshawe, while Williams cored a pair of goals in the tie against St. Clair.

Rookie keeper Nolan Bradshaw of Niagara Falls made his OCAA debut against St. Clair. Bradshaw made some key saves throughout the game.

The Knights tied the Fanshawe Falcons 0-0 and lost their game against the St. Clair Saints 1-0.

Rookie keeper Alexis Hebert recorded her  fourth straight shutout against Fanshawe and only allowed one goal on 12 shots in the 1-0 loss to St. Clair.

The Knights captured the tournament championship cruising to a 3-0 record with victories over the Centennial Colts (84-77), the Fanshawe Falcons (89-67), and in the championship final, the Durham Lords (85-71). Second year Knights forward Jordan Wilson was named the tournament most valuable player.

The Knights open the 2017-18 regular season on Friday when they host the Mohawk Mountaineers.

The Knights went 2-1 losing in the championship game to the Mohawk Mountaineers 76-48. The Knights defeated the St. Lawrence Vikings (67-57), the Georgian Grizzlies (47-41), before losing in the final. St. Catharines native Mary Ingribelli was named a tournament all-star.

The Knights will open the 2017-18 regular season Friday versus Mohawk.

The Knights travelled to Seneca to take part in the Sting Challenge men’s volleyball tournament.

The Knights opened with a pair of impressive victories over the Seneca Sting (3-0) and Humber Hawks (3-1). The next day the Knights were defeated by the tournament champion Georgian Grizzlies (3-1) and Conestoga Condors (3-1). The Knights open their regular season schedule next weekend when the team heads to Sudbury for a pair of matches against the Cambrian Golden Shield and Boreal Vipers.

The event saw eight teams from across Ontario and Quebec visit the Welland campus for a final pre-season tune-up. The Knights defeated the Loyalist (3-0) and Montmorency (3-0) before being edged out in five sets by the Fanshawe Falcons. The Knights then lost to the Durham Lords in the consolation finals.

The Brock Badgers won the tournament championship. Laura Condotta was named Most Valuable Player of the yournament.