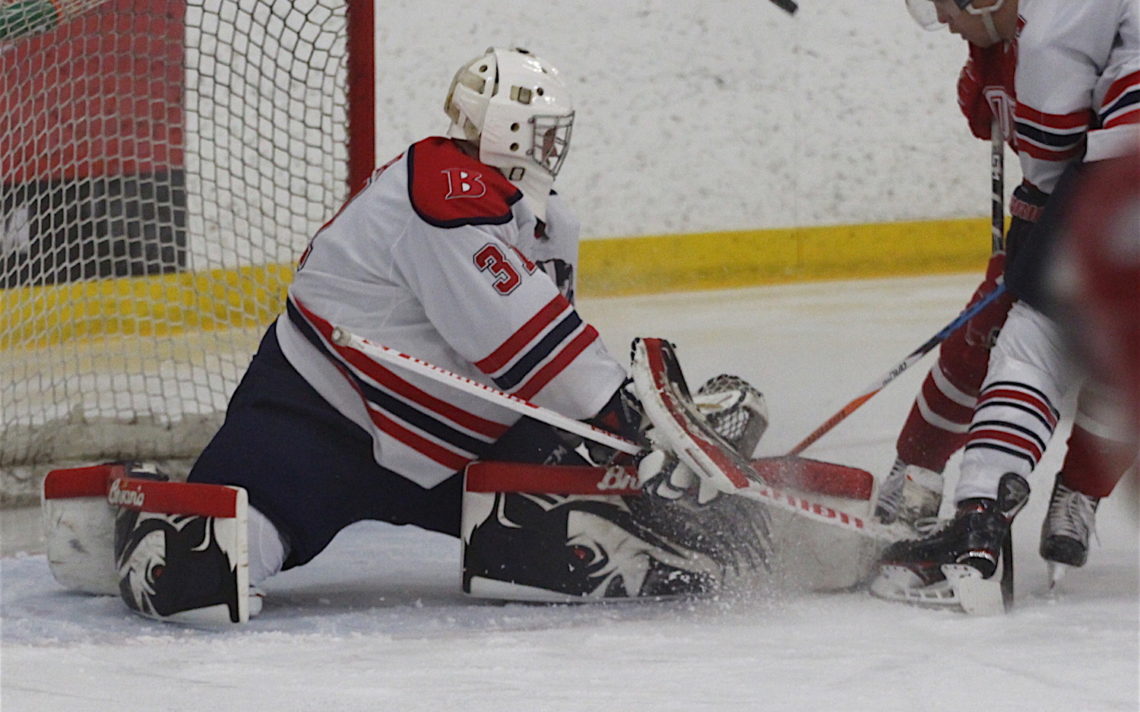 Clint Windsor made 51 saves as the Brock men’s hockey team beat York 3-2 to win the OUA West final and advance to the national championships. Photo by BERNIE PUCHALSKI.

It was a great week for Brock men’s teams.

The hockey team defeated York 2-1 in the best-of-three Ontario University Athletics West Division final to earn a berth at nationals, while the men’s basketball team was given a wildcard berth into this week’s national championships in Halifax, N.S.

Brock will host the OUA Queen’s Cup Final Saturday at 7:15 p.m at the Seymour-Hannah Sports and Entertainment Centre versus McGill before heading to the USPORTS National Championships in Fredericton, N.B., next weekend.

Tickets for the Queen’s Cup are available at the Walker Sports Complex Welcome Desk or by calling 905-688-5550 x4060. Ticket prices are $10 for adults and $5 for students and seniors.

The men’s basketball team heard Sunday night they would be heading to the national championships this week in Halifax. 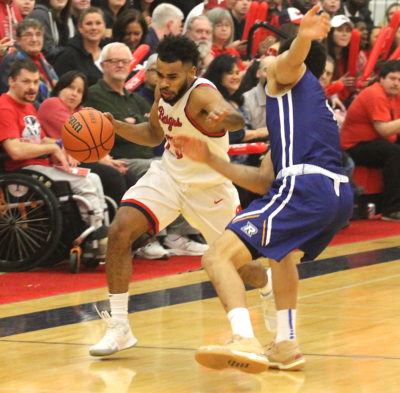 Brock will open the nationals Thursday at 1 p.m. versus second-seeded Calgary, the Canada West champs who are making their third straight appearance at the nationals.

Calgary, which is led by Mambi Diawara (22 PPG), won the consolation crown at last year’s nationals.

In exhibition play, Brock beat Calgary 82-70 on Oct. 20 with Johneil Simpson netting 18 and Dani Elgadi 17. Calgary was led by Diawara and David Kapinga with 17 points each.

Brock fell 69-63 to Ryerson in the OUA semifinals Wednesday.

Prior to the game, a number of Brock players were honoured for the achievements. Elgadi was named an OUA first team all-star, Cassidy Ryan a second team all-star star and Kascius Small-Martin was selected for the all-rookie team. 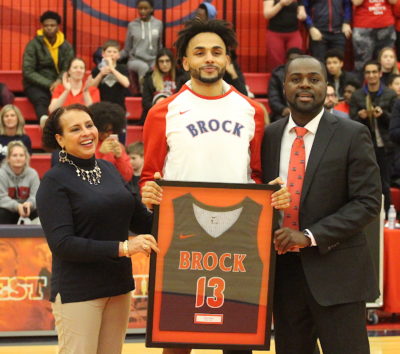 Elgadi, a former OUA rookie of the year, led Brock in scoring (17.3 PPG), rebounding (9.3 RPG), blocks (1.7 BPG), and field goal percentage (51.5%). He also ranked second on the Badgers in both steals and assists and was in the top 10 in the OUA in several statistical categories.

Women’s player Kristin Gallant was also named to the all-rookie squad. Gallant led her team in scoring (13.1 PPG) and was second in rebounding (5.9 RPG). 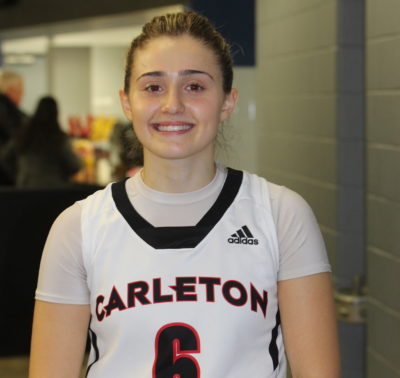 Both teams will compete in the national championships this week in Regina.

The host Niagara College men’s basketball team finished off the Ontario Colleges Athletic Association championships with a 89-83 victory over the Lambton Lions in the consolation final.

Levi Mukuna netted 15 points as Niagara built a 42-29 lead over Lambton at halftime, but the Lions rallied to take a 70-65 lead after three quarters. The game was tied 76-76 before the Knights closed it out with a 13-7 run.

“It was great to get the win against Lambton today,” Knights head coach Mike Hurley. “It showed great character coming back and finishing strong by winning our last two games of the year even after losing a heart-breaking game on Thursday to the No. 1-ranked team in the country. 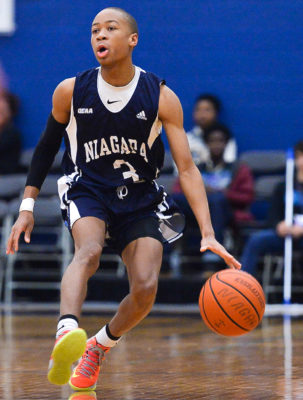 “Our goal was to get to nationals, but finishing the season as the fifth best team in Ontario is definitely a great accomplishment and something to be proud about.”

“It has been an absolute privilege to be a Niagara Knight, and it meant so much to me to end my career with a home victory,” Mukuna said.

Van Hutchinson Jr. and Jordan McDonald  both contributed  20-plus points in the win. Lambton was led by Branden Padgett with a game high 28 points.

Niagara opened the championships with a 84-72 loss to Seneca, the top-ranked team in Canada.

The Knights led by three points at the end of the first and second quarters.

“Niagara’s offensive rebounding really seemed to hurt us in the first half,” Seneca head coach Jay McNeilly said. “We knew we had to make adjustments at the half or we were going to be in trouble. “

Seneca took control of the game with a 13-0 run in the fourth quarter.

Leading Niagara were Hutchinson Jr. with 22 points and Niagara player of the game Jordan Wilson with 18 points and 11 rebounds.

Niagara advanced to the consolation finals with an 85-78 triumph over the Fanshawe Falcons.

The Knights trailed 26-20 after one quarter before rallying to lead 42-39 at the half.

Hutchinson Jr and Kevin Cooper netted 16 points each for Niagara and rookie guard Johnnie Richardson from Niagara Falls earned player of the game honours after finishing with 13 points, three rebounds and three assists.

Niagara College’s women basketball team made it to the bronze-medal game of the OCAA championships before falling 92-87 to the Mohawk Mountaineers.

Niagara was led by Governor Simcoe alumnus Mary Ingribelli, who had 33 points and eight rebounds. She was named the player of the game and a tournament all-star. Kaitlyn Mahu added 18 points and nine rebounds for Niagara and Rysa Delmundo had 14 points. 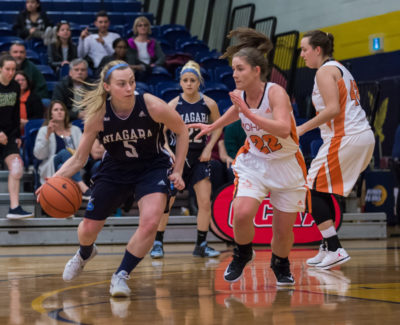 Niagara opened the tournament by rallying from a 21-point deficit to defeat the George Brown Huskies 75-72.  Niagara female athlete of the week Ingribelli had 30 points and 14 rebounds, Courtney Kilyk had 14 points and nine rebounds, and Brooke Cesar had nine points and 13 rebounds.

In the semifinals, Niagara fell 75-72 to Fanshawe.

At the conclusion of the regular season, Ingribelli was named an OCAA first team all-star and Kilyk was selected to the second team.