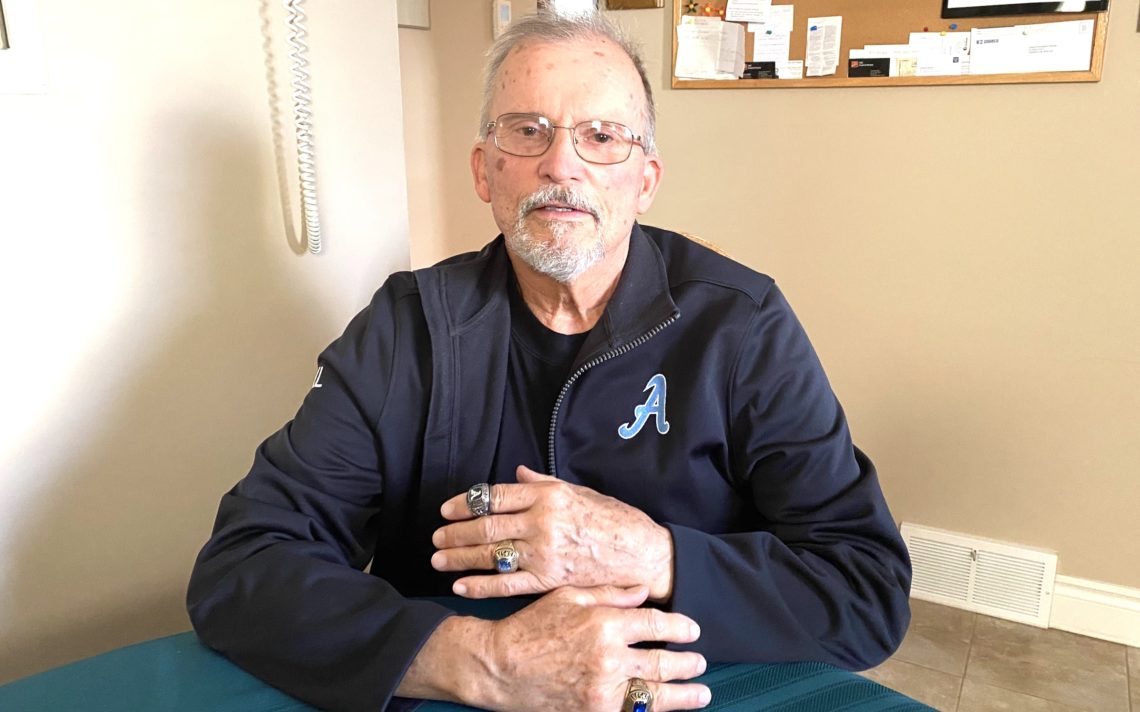 Lee Randall has become a homebody, but certainly not by choice.

The 76-year-old St. Catharines native has spent the last four decades or so out of the house almost every night as a trainer for the St. Catharines junior A Athletics in the summer and for various local junior B hockey teams in the winter.

These days Randall finds himself in front of his computer most afternoons and then watching television after supper with  sports shut down due to the COVID-19 pandemic.

“It’s not worth it,” he said. “Things are not getting better, they are getting worse.

“We had no lacrosse and that upset me more than anything.”

He admits missing being at the arena and interacting with the players.

“It’s got to be habit almost,” he said. “You’ve done it so long. Even now, I just sit here at night. Five nights a week have been occupied for 40 years and next thing you know, what do you do now? I was on the road a lot so I would be driving four hours to come back to a practice or a game.

“Being with sports all these years, I never got involved in (other hobbies).”

Randall has a long and impressive resume of volunteering and training which began as an assistant coach with the Garden City Kiwanis Hockey League when his son Bill was a youngster. He is best known for his time with the Athletics, where he has seen the organization win four Minto Cup Canadian championships, and has been on the bench for the Fort Erie Meteors since 2004.

His foray into the word of training began for the Thorold Golden Eagles in the early 1980s.

“I was supposed to get laid off (from Northern Telecom) and the trainer in Thorold asked me to help and then two weeks later quit,” he smiled.

That started Randall on a journey that has kept him hopping almost year around as he goes from season to season.

“I was always occupied,” he said.

Randall retired from his position as an industrial engineer about 20 years ago, which made things considerably easier.

“I travelled a lot. I commuted from Richmond Hill, from Newmarket. It makes for a long day when you have to come home and then go on a bus trip,” he said.

He almost quit in 1990 when his schedule became too hectic.

“That year was I working in Simcoe. I was up 4 a.m. because I had to leave early (from work) to get the bus or go to a practice,” he recalled.

But A’s coach Jim Brady somehow persuaded Randall to stick it out.

“I told him I can’t do it anymore but he said I guarantee you a trip to Vancouver this year and we ended up going and winning (the Minto Cup),” Randall said.

Randall didn’t have any formal training when he began.

“In the old days you just sort of started up but I worked with some good people along the way I learned a lot from,” he said.

Randall’s hard work and dedication earned him a spot in the St. Catharines Sports Hall of Fame in 2015 when he was inducted along with Jim McMahon, Sr., Earl McNeil, Bob O’Doherty and Wilfred Pruden.

“It was (a huge thrill). It was a surprise because I didn’t know about it,” he said. “I know (A’s president Paul) Coates was talking to my son and sending him information back and forth.

“It made me feel good but I’ve never done it for recognition for all the years. You were always there and the kids always loved you. I get more sweaty hugs at the end of the season.”

Randall said there is a special bond that forms between a trainer and the players.

“The kids have always been good,” he said. “Times have changed. I remember at the beginning you always had three or four players maybe you weren’t that fond of at the beginning and the last 15 years they have all been really good. You get the feeling they appreciate what you do for them.

“It gets personal because the players get hurt and you’re working on them for one thing or another and you get camaraderie there.”

Randall would love to get back to training, but only when it’s safe.

“I’m hoping by next year,” he said. “The main thing is if the risk factor was low enough and you’re careful. I mostly do it to help the kids out. There is no monetary value to it at all.”

For now, he’ll continue to sit it out at home with his wife Linda.

“I’m surprised my wife has put up with me for all these years,” he said, with a smile.