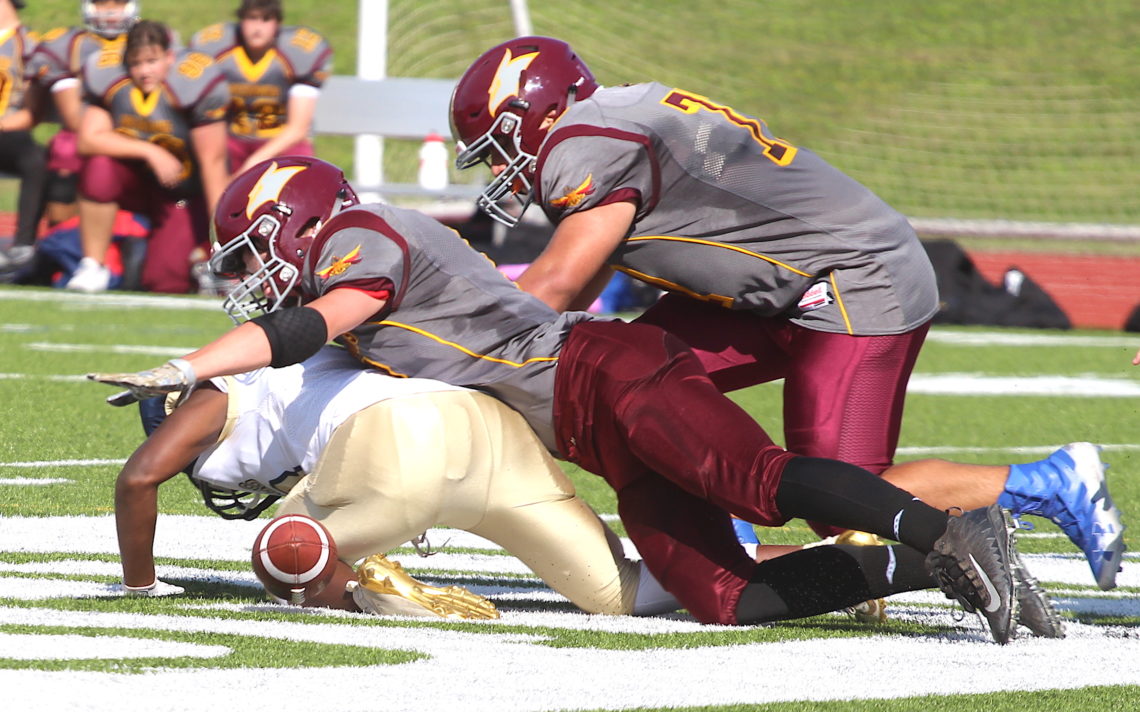 It was the third shutout of the year for the Marauders, who have only surrendered six points all season.

Contributing to the win for Myer were: Willy Jackman with a pair of TD passes to Ethan Carmichael; Jordan Gilbert with three rushing majors; Kurtis Zwierschke with a run for a major; Jacob Burke with a rouge; Drew DeAngelis and Jorge Rodriguez with interceptions; Chris Bechkos with two interceptions and six converts; and, Mateo Corritore with an interception return for a touchdown.

“We did nothing worth writing about,” Westlane head coach Jason Babony said. “We had trouble establishing drives and stopping the jet sweep, but our special teams were decent.”

The Greater Fort Erie Gryphons pushed their NRHSAA Tier 1 record to 3-1 with a 41-6 victory over the Sir Winston Churchill Bulldogs (1-3) Thursday.

“It was a great game played by all units on our team,” GFESS head coach Dave Sauer said. “The defence was lights out and the offence moved the ball well.”

He is excited with how his team is performing.

“We are now coming into our own,” Sauer said. “I was very proud of the effort given today (Thursday).”

He felt the difference in the game was the Gryphons controlling the line of scrimmage on both sides of the ball.

“If the boys continue to play like that, anything is possible,” Sauer said.

Scoring for GFESS were: Drew Beam with an eight-yard and a one-yard TD run; Campbell Laroche with a six-yard TD run and a 53-yard TD grab from Braeden Eder; Josh D’Uva with a 26-yard field goal; and, the Gryphons defence which recorded a pair of safeties.

The Centennial Cougars improved to 4-0 in NRHSAA Tier 2 senior football action Wednesday with a 41-7 victory over the Grimsby Eagles (2-2).

Grimsby grabbed an early 7-0 lead before reeling off 41 straight points.

“We started slow and may have underestimated Grimsby a bit,” Centennial head coach Dom Nero said. “We also took too many penalties in the first half, but we knew this win meant a lot in terms of playoff seeding and we came out strong at the start of the second half and played the kind of football that we knew we were capable of.”

Contributing to the win for the Cougars were: Robbie Pereira with a three-yard TD run, a 70-yard TD pass from Josh Boyle and a TD on a 50-yard run that was preceded by a 20-yard pass and a lateral pass; Josh Boyle with an 80-yard TD catch from  Ethan Robertson and an interception;  Garvin Leavens with a two-yard rushing touchdown; and, MJ Doyle-Marshal with a five-yard TD run.

Ty Mitchell had a four-yard TD run for Grimsby and Ryan Neudorf had 20 carries for 117 yards. The Eagles were hurt by 115 yards in penalties.

“The score doesn’t reflect the quality of the game,” Grimsby head coach Zack Silverthorne said. “It was tough with lots of good things on both sides of the ball.

“They deserved to win as our lack of discipline consistently kept killing any momentum.”

Silverthorne is hoping for better things from his team next week.

“Hopefully we can clean things up going into our last regular season game against Thorold,” he said. “It won’t be easy.”

Joe Aceti booted the winning field goal in overtime and Reid Woodcock rushed for more than 80 yards and a touchdown to power the Eden Flyers (2-2) to a 10-7 victory over the Thorold Golden Eagles (1-3) Wednesday in NRHSAA Tier 2 senior football action.

“Reid Woodcock carried the load for us,” Eden head coach Jeff Webster said. “We are still struggling to get our passing game where we need it to be. It’s tough because we have so many players going both ways, but we have no choice other than to figure it out.”

Defensively Stuart Huebert played the game of his life for Eden and led the team in tackles, and Dawson Abrahams also had a strong game, making plays all over the field, Webster said adding it was his defence’s strongest game of the season.

“Our defensive coordinator, Paul Somsel, has them tackling well and we are getting better every week with our run lane responsibilities,” he said. “Our secondary shows its inexperience at times but they are working hard to get better.”

The Flyers’ special teams also played a huge role in the triumph.

“Sam Miele made a few excellent decisions that led to positive results,” Webster said. “We also had a huge blocked field goal attempt that sent the game to overtime.”

Thorold had a game-winning touchdown called back in overtime and several other big plays flagged.

“Our defence stifled Eden throughout, forcing six turnovers,” Thorold head coach Duane Kemp said. “Offensively, we constantly shot ourselves in the foot with mental mistakes that cost us big plays and field position.”

“Full credit to Eden for taking advantage of our mistakes,” Kemp said.”They were well coached and played hard.”

Both teams agreed to play an exhibition game with lineups  of juniors and seniors who only had one year of football experience.

“I have great respect for the sportsmanship Governor Simcoe’s coaches and players extended to Collegiate football,” Collegiate head coach Nathan Greene said. “I am grateful to (Simcoe coaches) Carey Spiece and Jamie Brophy for going the extra mile to make this game available to CI.”