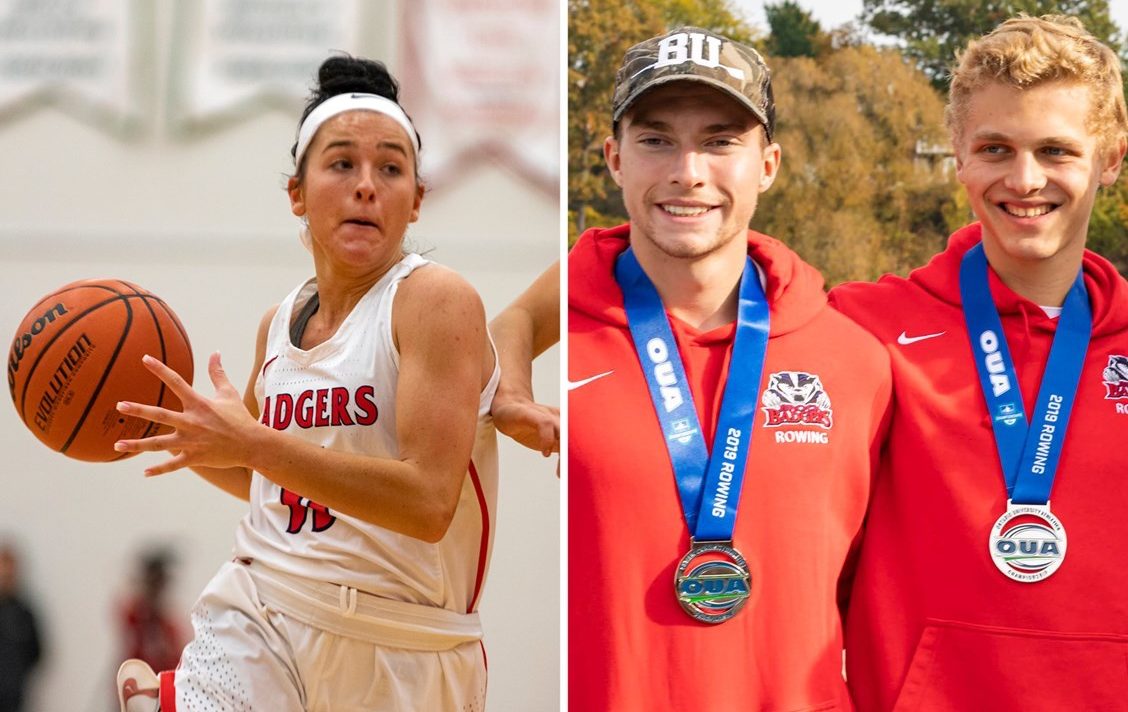 Tatti, a senior point guard from Ancaster who is studying social sciences, led her team in scoring in back-to-back victories over the defending champion McMaster Marauders at home and the Toronto Varsity Blues on the road last week to help the women’s basketball team remain undefeated to start the season. On Oct. 30, Tatti scored 19 points, collected eight rebounds and added five assists during a 75-61 win over McMaster. On Nov. 2, Tatti registered 23 points, seven assists and went five-for-five at free throw line in Toronto.

Ianiero coach of the year

This is the second time in three years Ianiero has won coach of the year award, while forward Jared Agyemang, midfielder Alejandro Puentes and goalkeeper Alex May were each named to the OUA all-star team.

On the women’s side, goalkeeper Marilena Spagnolo secured all-star honours. 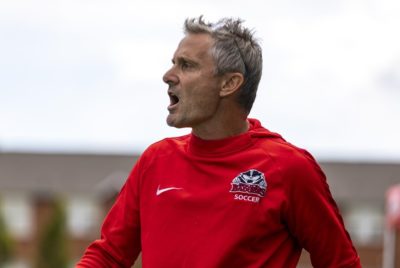 Ianiero, who also served as interim coach for the women’s team, guided the Badgers to a thrilling season where they finished third place in the OUA West with a record of 6-5-3.

“Lucio is really straight up. He’s black and white,” assistant coach John DiPasquale said. “He deals with each player on their own. He rarely lets himself go in the heat of battle. Looch treats his players with the respect he deserves. He doesn’t beat around the bush.”

After suiting up for the Badgers and being named an OUA all-star himself in 1992, the Brock bench boss helped a trio of current players earn similar recognition – including one first team selection – backed by a seventh-ranked offensive output and a spot back in the postseason after missing out in 2018.

Agyemang was named a first team all star. A psychology student from Brampton, Agyemang led the OUA in scoring for a majority of the season and ultimately finished second with a total of 13 goals in 14 games.

May, a second-year goalie and Puentes, third-year midfielder, were named second-team all stars.

May finished fourth in the OUA with 58 saves and Puentes, a social sciences student from St. Catharines, gave Brock an edge on the field by controlling possession.

Spagnolo earned OUA women’s soccer second team all-star honours. Spagnolo, who hails from St. Catharines, led the OUA in total saves with 97 and finished second with a .933 save percentage. The Applied Health Sciences student was also fourth with a 0.55 goals against average.

DiPasquale, who grew up playing alongside Ianiero, said Ianiero is a family-first coach.

“It had an effect on both of our teams this year,” said DiPasquale. “Lucio has the gift of making everyone feel a part of the team.”

Women’s wrestler Hannah Taylor won a medal for Canada at the U23 World Championships in Budapest, Hungary.

“This was my sixth world championships and I had failed to make the podium until today,” Taylor told Wrestling.ca. “This medal gives me confidence that I can be competitive at this weight-class and this age level.”

The Brock wrestler was leading 5-2 when she secured the victory by fall.

“Going in, I was really excited to wrestle,” she said. “Things came together, I stayed low in my stance and tried to take advantage of any opportunity I could to score.”

Taylor defeated Eda Tekin of Turkey 4-0 in the qualifying round, and India’s Pinki 2-1 in the quarter-finals. In the semifinals, she lost to eventual champion Sae Nanjo of Japan 14-4.

The men’s hockey team filled the net en route to a 8-2 win versus the RMC Paladins at Seymour-Hannah Arena on Friday.

It was Brock’s fourth consecutive win to improve to 5-4.

“What I liked about tonight’s win as that it was an all-around effort by everyone,” head coach Marty Williamson said. “Everyone did their job and when that’s happening it’s really fun to coach.”

The Badgers led 3-1 after the first period and kept pouring on the shots to outshoot the Paladins 39-26. 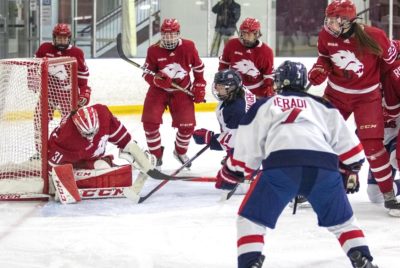 Brayden Stortz and Mitchell Mendonca each scored a goal and tallied two assists. Goaltender Mario Cavaliere kicked out 24 shots for the win.

Tyler Rollo and Christian Girhiny each added two assists, and Matthew Barnes and Frankie Pucci each chipped in an assist.

After a scoreless first period, Kara Washer and Erin Locke each tallied a goal six minutes apart in the second period.

Up next, the Badgers (2-3) host the Laurentian Voyageurs on Friday at Noon in a special school day game.

The Badgers remain as the lone undefeated team in the OUA West with a record of 4-0.

“We’re really happy to win four in a row,” head coach Steve Delaney said. “We have lots of work to do, and keep working hard in practice. We have to make sure we aren’t lacking focus at times, or making errors. If we play our A-game, which we did tonight, then we’re pretty tough to beat.”

Brock has dropped only two sets so far this season, which is the best in the OUA. 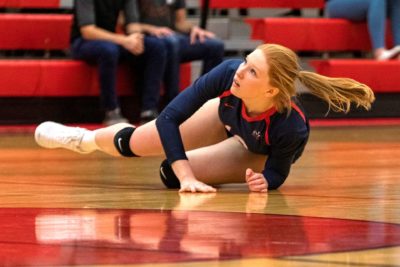 The Badgers received reinforcements as Grace Pyatt (six points) and Grace Edwards (two points) each returned to the lineup from injury.

“Aleiah was great on defence and Emily had a great game as well,” Delaney added.

Up next, the Badgers (4-0) hit the road to play the York Lions on Saturday.

The Badgers dominated the Toronto Varsity Blues on the road 78-59 for their third consecutive victory.

“We played much better in the second half,” head coach Mike Rao said. “We moved the ball better and spaced the floor. We finally made some shots. Overall, a good game defensively.”

Melissa Tatti led the offence with 23 points and seven assists and Meagan Charbonneau, who went seven-for-eight at the free-throw line, poured in 20 points.

The No. 7 men’s basketball team lost 70-66 to the Toronto Varsity Blues at the Goldring Centre on Saturday.

It was Toronto’s first win of the season.

Trailing by a point, Blues forward Daniel Johansson hit a three-point shot in the dying seconds of the game to put Toronto in the lead.

Up next, the Badgers (1-2) return home to host the Guelph Gryphons on Friday at 8 p.m.

The Brock men’s lacrosse team punched their ticket to the Baggataway Cup semifinals at McGill University in Montreal on Saturday, Nov. 9.

The Badgers defeated the Laurier Golden Hawks 12-3 at Brock Alumni Field on Friday.

“We try and focus on the little things and keep improving every day,” said head coach Tim Luey, whose team is 11-0 this season. “We have a great group of veteran players that know our work isn’t done. We have to just keep pushing and not be satisfied.”

Sam Leclair opened the scoring early in the first before Laurier’s Alex Kew tied it up 1-1.

That was a close as Laurier would keep the score as the Badgers began pulling away. It started when Brock had back-to-back goals from longpoles Latrell Harris and Adam Kirchmayer.

The Badgers led 8-1 at halftime.

Goaltender Simon Bellamy once again held the Hawks to only three goals, and Leclair finished the night with a pair of assists.

Bradley Fannell and Aidan Buis each contributed an assist.

After falling behind 0-2, the Badgers stormed back with winning back-to-back sets.

“The crowd was really in it tonight and our guys took on the challenge,” head coach Matt Ragogna said. “I was really proud fighting back from 0-2 and how our team was composed through some big moments. A big stepping stone for us.”

“It was a tough one,” Ragogna said. “But an injury and some young inexperience fought us near the end.”

Nanle Yusuf led the Badgers with 15 kills and seven digs while Peter Schnabel chipped in 10 kills.

Up next, the Badgers (2-2) continue their season on the road with a visit to the York Lions on Saturday.

The men’s rugby team will advance to the OUA bronze-medal game.

Brock lost 60-21 to the Queen’s Gaels in the OUA semifinal in Kingston on Saturday. The Badgers will play the loser of the Guelph-Trent game, which takes place on Sunday, Nov. 2.

Zach Zorbas scored Brock’s first try after exploiting a weakness in the Queen’s defence in the 61st minute.

The Badgers offence poured on the pressure in the 72nd minute as Tim Sullivan found the end zone. 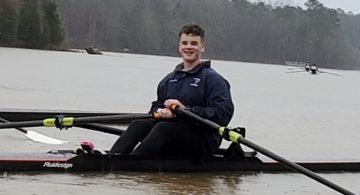