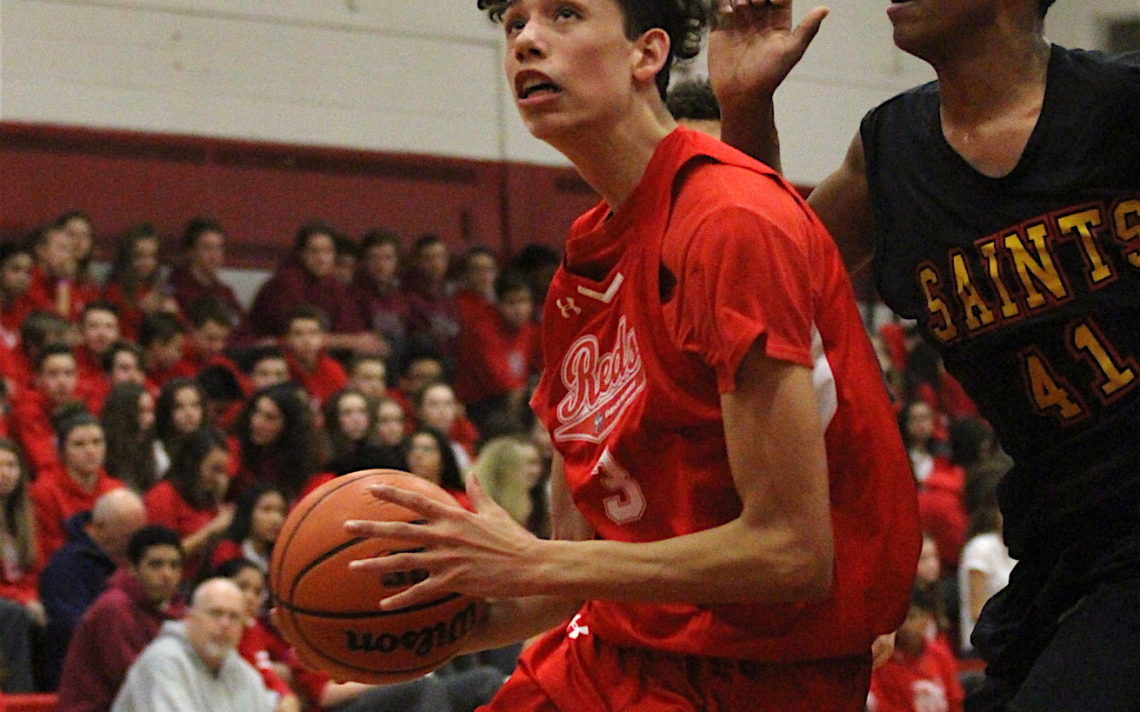 “It’s super important,” said the 6-foot-4 Denis Morris guard Monday. “I remember watching it as a young kid and it’s fun to play in this kind of atmosphere.

“I always went to the final game and that’s where I want to be.”

The 16-year-old helped the fifth-seeded Reds get one step closer to that goal by scoring 24 points as Denis Morris opened the tournament with a 62-34 victory over the St. Catharines Collegiate Saints.

How far the Reds go in the Standard tournament will depend a lot on the play of the Grade 11 student.

“He’s very long, very athletic and he’s a great defensive player,” Reds assistant coach Austin Anderson said. “We require a lot from him on defence and sometimes it takes away from his offensive game, but he’s an offensive threat too.

“He’s our go-to guy on offence and defence.”

Honsberger doesn’t mind all the responsibility and feels his cardio is up to the challenge.

“I’m OK because we do a lot of conditioning in practice and I like challenging myself and going against the best,” he said. “I try to help my team by scoring and stepping up on defence.”

Honsberger was a member of the St. Catharines Rebels squad that placed fourth in Division 1 of Ontario Basketball Association play this spring, but high school basketball is a big part of his hoops obsession.

“It’s up there and it’s probably No. 1 because of the competition and you get to play against your friends,” he said.

He played a few games of senior ball in Grade 9, but this year will be his first full year at the senior level.

“It’s a lot more physical and the refs let more contact go,” Honsberger said. “I like it.”

He knows what he needs to improve upon to make an even bigger impact at the senior level.

“I have to work on getting stronger and getting more physical.”

Collegiate fell behind 21-5 in the first quarter to the Reds Monday, but cut the lead to under 10 just before halftime. Denis Morris then took charge in the second half.

“I thought we put together a good effort after we got our feet wet in this environment,” Collegiate coach Bob Krzeczkowski said. “It was tough for us to do what we wanted to do in the first quarter.

“We were a little shell-shocked coming in but later we settled down and we got it to single digits by halftime.

“We just want to get better every time we play,” Krzeczkowski said. “We’re looking to improve and put some systems in place and see where we can go because we have good athletes.”

The top-seeded St. Francis Phoenix opened their defence of the Standard tournament Monday with an 84-13 victory over the Grimsby Eagles.

BPSN Star of the Game: DM’s Noah Honsberger with 24 points.