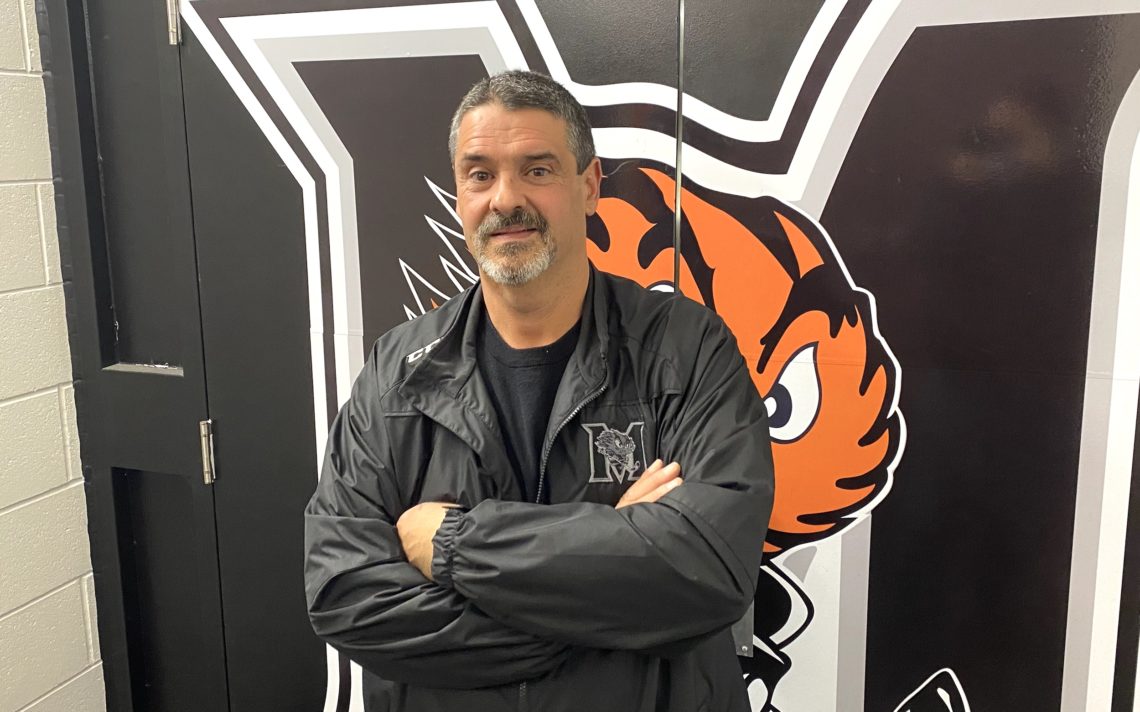 There is seemingly no task Joe Fazio hasn’t undertaken with the Fort Erie Meteors.

The 57-year-old Fort Erie native has been a fixture both behind the bench and behind the scenes for 35 years.

Fazio’s official title is assistant coach but that doesn’t even begin to describe his impact on the organization.

“(I do) anything and everything,” smiled Fazio, who was carefully and painstakingly gluing nameplates together for the players’ lockers while being interviewed. “I wash sweaters and you see what I’m doing now.”

It has been that way since Fazio joined the Meteors after coaching minor hockey in Fort Erie for about a decade.

“I followed Tony in his career and watched him play and when it was all done and he got involved here, I was always here,” Fazio said. “And then the time came they asked me to come and help with everything and I’ve been here ever since.”

Meteors head coach and general manager Nik Passero grew up around the Meteors and doesn’t know the organization without Fazio.

“My whole life buzzing around here, he was always there,” Nik Passero said. “Our group is pretty small and he’s always been there.

“He spends hours at the rink that no one else does.”

Nik Passero said he recently dropped by the Fort Erie Leisureplex late one night to find Fazio working away.

“We didn’t have a practice and I came here at 11 and he was here cleaning something up. That’s who he is.”

Nik Passero said Fazio also acts as a sounding board for himself and brother Anthony Passero, who is the club’s associate head coach.

“He’s a great help for us and a great tool for me and Anthony to bounce things off,” Nik Passero said. “He’s an old school guy and it’s a good balance of old school and new school.”

Fazio, who works at Rosehill Auction, is happy to be able to help carry on the tradition Tony Passero started.

“Tony would be so proud of these two kids. Nik was far away at school and I didn’t know how well he was doing, but when I see him first hand, if there was ever anybody with the potential to make a career out of this, he’s got it.

“His dad would be so proud.”

Fazio paused for a couple of seconds when asked what it’s like without Tony Passero around. Passero passed away last year.

“Different for sure,” he said softly. “I talk to him all the time in my mind and I try to remember things he said and did and try to keep everything on the same pace like he would have wanted.

Fazio said he gets the most satisfaction out of the little things and his interaction with the players.

“Through the summer a kid who played here like 10 years ago gave me a call out of the blue to shoot the breeze and ask how I was doing. That’s rewarding to hear from this kid and what’s going on in his life.

“We touched him for that year or two that he was here.”

Fazio said he learned early on it was all about the players and that’s what keeps him coming back.

“I guess the love of the kids and the love of the game, honestly. Last night we handed out equipment and I wasn’t here. Today three kids texted me thanking me for the stuff. It’s nice to get that back from the kids.”

Fazio has no plans to slow down.

“I’m not quitting yet. Tony always said we’ll stop when we don’t enjoy it and it hasn’t come to that yet,” he said. “You meet a lot of people in this and you don’t do it for as long as I have if you don’t appreciate what the kids give you back. It’s all about the kids.”