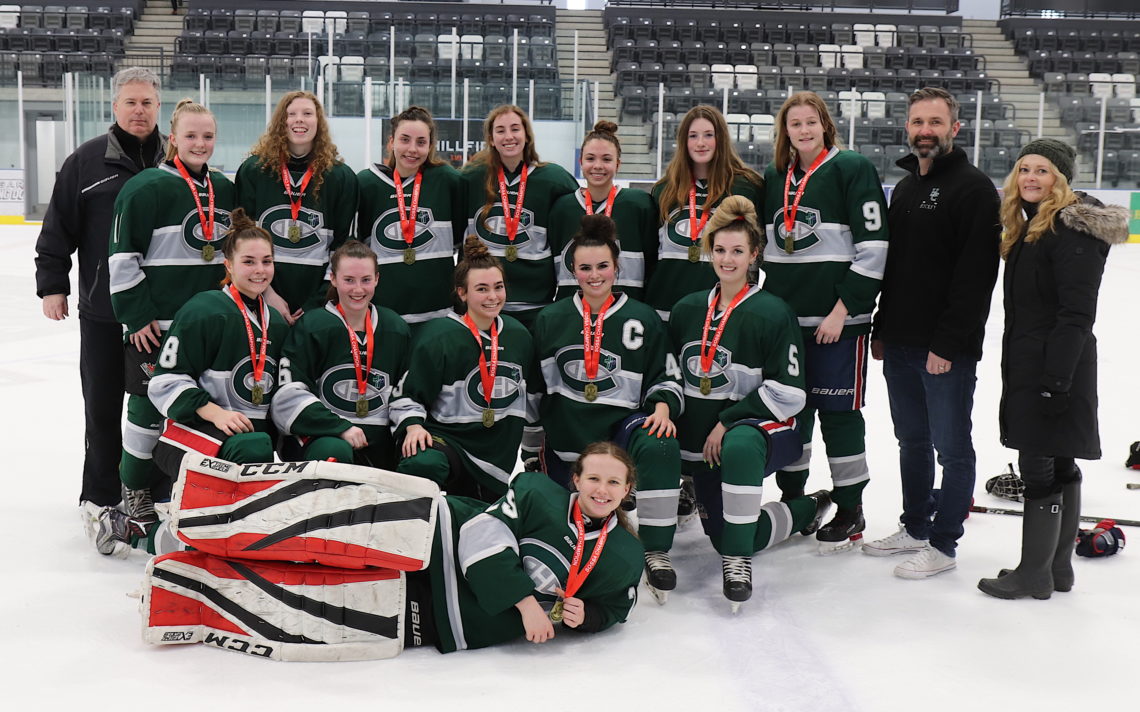 No more SOSSA heartbreak for Raiders

“It feels amazing because the last two years we have just missed out,” said Holy Cross goaltender Kaydra Corney, who recorded shutouts in both the SOSSA semifinal and final. “It has been tough but if feels good to move forward.”

The Raiders were eliminated from the SOSSA playdowns last year after a seven-round shootout in the final and two years ago they lost 2-1 in a SOSSA qualifier. 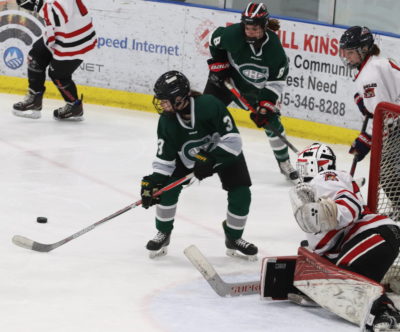 Corney feels teamwork got the Raiders over the hump this season.

“We work as a team and we don’t have to have all the skill in the world but we work together and we work hard,” she said.

The midget AA player with the Niagara Rapids has high school hockey near and dear to her heart.

“It’s pretty important,” the Grade 11 student said. “It helps me grow as a hockey player and it gives me some extra practice.”

“She is very intense and she’s really patient with the shooters,” he said. “It is hard to pick spots because she is patient and reacts to the puck.

Holy Cross had to play awesome to beat Grimsby Tuesday.

“We knew they were a really good team, we had a really good season and it is what you would expect from a SOSSA final,” Accursi said. “It was tight with good checking and good goaltending. It was exciting.”

At the beginning of the season, Accursi realized he had a team capable of qualifying for the Ontario Federation of School Athletic Associations’ girls A/AA hockey championships March 24-26 in Stratford.

“We knew we had a really good team this year with the whole team returning,” he said. “We competed well and came up a little short last year in SOSSA. We were expecting some big things this year.”

Holy Cross has now recorded four straight shutouts on its way to an OFSAA berth.

“We are strong defensively and we have two very good goalies,” Accursi said. “You win championships from the defence out and that’s how we play. We have excellent defence and we get timely scoring from our forwards.”

Holy Cross advanced to the SOSSA final with a 1-0 victory over the E.L. Crossley Cyclone. Alicia Juras scored the goal and Corney recorded the shutout. 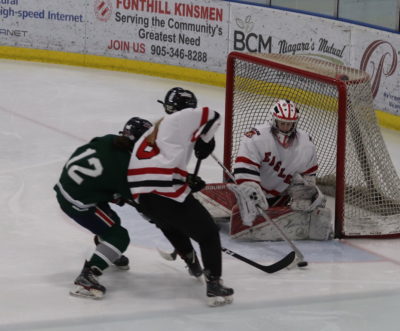 Holy Cross topped the NCAA regular season standings with a 5-1-1 record. The Raiders then defeated Saint Paul 6-0 in the zone semifinals and Lakeshore Catholic 7-0 in the zone final.

Grimsby had a number of chances to score in the SOSSA final but Korney was up to the challenge. The Eagles best chance came when Grace Nelles hit the cross bar with 2:27 left in the game.

“It was a hard-fought game. They played hard and really wanted it but it wasn’t our day,” Grimsby head coach Leanne Travis said.

The season-ending loss didn’t detract from a fine season by the Eagles.

“They played with a lot of heart, they all want to play, they are all happy to play and it is their favourite sport,” she said.

Getting to play at SOSSA was a big deal for a lot of the Eagles.

“A lot of the girls are out of the playoffs with their rep teams so it was great for them to have this opportunity,” Travis said.

The Eagles will be looking to reload rather than rebuild next season.

“We have several graduates and there will be lots of girls leaving but I think we will still have a strong team,” she said.

For the Grimsby Eagles: No scoring.